Bonjour, mesdames et messieurs! I feel like I can use that as a greeting with some relevance, since France dropped their Eurovision 2017 entry on us earlier in the week, just in time to steal some of Germany’s thunder. Not that Germany had that much to steal in the first place, but more on that in another post (for now, I’ll just say that red, white and blue > red, black and yellow). My point is, any opportunity one gets to throw around some random, stereotypical French should be taken. Oui oui!

France is just about the only country where there ISN’T any NF action going on this weekend – a weekend so full of finals (and heats, and semis…all the good stuff), there’s not enough room for all of them to trend on Twitter. Feast your soon-to-be-weary eyes on this lot:

Visit eurovision.tv for all of the live-streaming links. And because it might be lonely and want to have a cup of coffee and a chat with you.

What will you be watching? You’ve got about as much chance of catching everything at once as I do of covering it all here – so I guess we’ll both have to pick our priorities.

To be honest – as if the title of this post wasn’t a giveaway – I’ve already decided where my loyalties lie. So, if you want some verdicts on/predictions for Eesti Laul, Melodifestivalen and Objetivo Eurovisión, you’ve come to the right blog.

Let’s muse about the music!

Estonia: Elina Born is back as Eesti Laul begins…but is she In Or Out?

It’s a good thing there isn’t a prize for Best Blog Subtitle, ‘cause I wouldn’t be winning any for that one. Blame Elina Born, who went and signed herself up for Eesti Laul as a soloist – for the second time – with a Stig Rästa song that begs to be used in many punny ways (it’s the new That Sounds Good To Me). Girl has said Goodbye To Yesterday and hello to a shot at competing in Kyiv, and her quest begins tonight with the first semi final of Estonia’s always enjoyable NF.

Of course, she’s not the only act competing this evening, so I shouldn’t devote too much screen space to her alone. Elina will be the second of ten acts to perform, and here’s a rundown of them all:

As usual, Estonia is providing us with an interesting set of songs, many of which take some second or third listens to figure out (it’s a pre-selection of acquired tastes, IMO, which is not a bad thing because it speaks for the complexity of what ERT program the show with). Sadly, I don’t have the luxury of being able to listen more than once – and in some cases, my first impressions are based on snippets (with a Eurotrip three weeks away and other commitments calling, time is like thunder short for me at the moment). Here are the semi one songs that stood out to me with minimal exposure.

My top five In Or Out, Everything But You, Feel Me Now, Supernatural + Have You Now. My favourites from this shortlist would be In Or Out (the trumpeting might be passé, but it’s still enjoyable) and Have You Now (which is obviously an Estonian tribute to The Chainsmokers). There’s nothing super-duper dated – or plain terrible – in the whole semi, though. Not even Ivo Linna is acting his age, musically-speaking.

Predicting the ACTUAL top five Slingshot, In Or Out, Feel Me Now, Hey Kiddo + Have You Now. I won’t say where I pulled this prediction from (in the interest of maintaining some degree of ladylike elegance) but let’s just say it’s unreliable. On the other hand, if it turns out to be 60%-100% right, I’ll claim that I produced it after a careful, educated analysis. K? 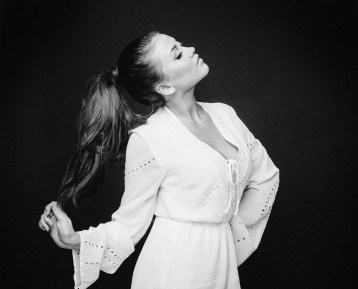 I doubt Elina will be pulling her hair in frustration after tonight…unless that’s how she celebrates too.

Do you think Eesti Laul’s off to a good start? Is there someone in this first semi who can do what Juri Pöötsmann couldn’t and get Estonia to the Eurovision final again (without giving the impression that their hobbies include dismemberment, and preserving vital organs in formaldehyde)? Let me know in the comments.

Sweden: Melfest makes it to Malmö for a big-deal Deltävling 2

That’s right – we’re taking a trip back to Malmö Arena, where those of us who were otherwise engaged during Petra Mede’s Melfest hosting gig may have first laid eyes on her when she owned Eurovision in 2013. Unfortunately, some might say, tonight ain’t about Petra – it’s about the seven acts who all want to follow in Ace Wilder and Nano’s footsteps (I assume) since they lead straight to Friends Arena in Stockholm, and the Melfest final.

We’re down one returnee from last week, with Mariette, Roger Pontare and Lisa Ajax in the mix. In Göteborg, just two of the four comeback acts progressed, and with only one real contender standing/dancing in the way of Mariette etc’s direkt and AC spots, can they all make it through? SHOULD they? Melodifestivalen raises some tough questions. Luckily, they’ll be answered later, but I’ll have a go at filling in the blanks in the meantime.

His mum’s done Melfest four times, so I think fabulousness (and great hair) must be in his genes.

On that note, it’s time to make a few predictions. Last week I somehow managed to be 100% correct, so I’m going to do my best not to ruin that this time.

Who’s going direkt? Mariette + Lisa Ajax. Based on such data as Facebook likes, Mariette seems to be the Nano of this week’s show (swap the man bun for dreadlocks and the difference is undetectable) in that the heat is hers to lose. Lisa’s song might divide voters (unless the f-word is on par with ‘darn it!’ in Sweden) but I have no doubt she’ll nail it live, and it’s big enough to leave a lasting impression. The swearing actually makes the song more memorable, I must say.

Who’s off to Andra Chansen? Benjamin Ingrosso + Dismissed. I desperately want Ingrosso to go straight through, but girl power is likely to pip him at the post. Fourth place could go to Roger Pontare if Sweden is still feeling his flow, but I suspect it might go to Dismissed as Hearts Align screams Andra Chansen to me.

In the immortal words of Elaiza, is it right or is it wrong? Do you think you know who’ll go where when the results of Deltävling 2 are revealed? Tell me more!

Spain: Which of the six singers will fill Barei’s dancing shoes?

Si, amigos – Objetivo Eurovisión is back, albeit without Brequette (maybe 2018 is your year, queen). The line-up is much more diverse than it was in 2016, which makes the outcome harder to predict. But we can’t complain about variety and (reasonable) quality all round…can we?

I don’t know about you, but I can clearly divide up these six songs: there’s two that I absolutely adore, two that I quite like, and two that I wouldn’t miss if I never heard them again. And I have no idea whether Spain will think along the same lines, or choose a song that has no chance of reversing their Eurovision fortunes. One thing’s for sure – I’ll be sitting on the edge of my seat while waiting for them to make up their collective mind.

Who SHOULD win LeKlein or Mirela. Yes, they’re my personal top picks, but I genuinely believe they have the best odds out of the six of making Spain’s trip to Ukraine worth it. I’m not saying they’re Eurovision winners, but if either one wins tonight and takes advantage of the gap between now and the contest (to revamp and maybe take a few singing lessons) anything’s possible.

Who WILL win I want to scream ‘SEND HELP!’ on this one, because I cannot decide. I’m not even convinced that one of my preferred two will win. I’m going to rule out Maika and Mario. Paula and Manel are my dark horses. The failure of Maria Isabel’s ethno-pop to get far last year gives me doubts about Mirela…so that leaves LeKlein. She’s already proven she appeals to the public (winning the Eurocasting round is why she’s in OE) and if she produces a more polished live rendition of Ouch! tonight, she could win this too. Or not, and I’m just wishful thinking.

In a shocking turn of events, I want to know what you think about the Spanish show. What’s good, what’s bad and what’s even worse in your opinion? And, more importantly, who’s going to win? You’ve got a 1 in 6 chance of getting it right!

Whatever you’re watching this evening (or tomorrow morning, if you’ve also been screwed over by your time zone), I hope to see you on Twitter for some 140-character or less fun times. We Eurofans know how to party, even if it’s just on social media.

May the best songs win (or qualify)!