As Kurt Calleja keeps telling us, this is the night; the night of four finals, two of which hold particular significance to the avid fan. There’s no time to waste! Here’s a wrap-up of the week’s results, plus all that’s ahead as we continue to fill up the blank spaces on the list of 2012 entries.

In with the old AND the new, say Russia and Slovakia

Q: Whose recent snapping up of a ticket to Baku could possibly make Engelbert Humperdinck, one of the oldest Eurovision contestants of all time, feel like a veritable spring chicken?

A: The Russian grannies, of course! Buranovskiye Babushki managed to do what has only been done once before (by a posse of latex-encased Finns in giant shoes) and beat Dima Bilan at something Eurovision related. 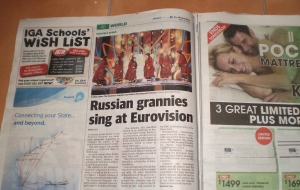 BB even made it into my state paper...if that's not granny power then I don't know what is!

This time, it was the Russian national final on Wednesday evening. Party for Everybody is the song the as yet unconfirmed number of nanas (I don’t want to cruel, but some of them are in danger of kicking the bucket prior to May) will be performing in the hope that they’ll raise enough cash to build a church in their home town. AWWWWWWW!!! Despite my pre-NF prayers that Dima would win – which he may have had it not been for Yulia, whose vocal abilities have not undergone much work since the days of Tatu, unlike her face – I can’t be mad at a bunch of sweet old ladies who just want to build a place of worship to, well, worship in. That could well be The Story of 2012, the background tale that clinches their qualification as an untimely death did forIceland last year.

Speaking of qualifying, will Slovakia’s rock number get them to the final for the first time? I have already mentioned this, but last week they announced that the artist they picked months ago but then un-picked (they love to mess around, our Slovakia), Miro Šmajda, will in fact be representing them, only under the name of Max Jason Mai. Luckily, he’s just as…well, flaming hot, particularly in the torso region, as he was when he was Miro. Not that a spectacular six-pack will win him any prizes at Eurovision. What could is his song Don’t Close Your Eyes. Some say it’s the country’s best chance yet, but I say that was Horehronie. Still, middling-to-fair rock has qualified before, even when sung by more unfortunate-looking folks.

So tonight is THE night of the selection season, thanks to Serbia and Sweden. I am definitely someone who’s been waiting for Željko Joksimović to present his fourth song for Europe, as well as following Melodifestivalen so closely it’s about to take a restraining order out on me. But don’t get me wrong – I’m just as curious to see what Portugal and Romania have in store for Baku. I’m hoping both can improve on their songs and in turn results of Düsseldorf.

Let’s get back to Serbia (I can’t help myself). Željko is practically Eurovision royalty, having notched up a 2nd, 3rd and 6th place as a performer and/or composer as well as hosting the show in 2008. Two of his three previous entries are up there with my favourite ESC songs ever, and the other isn’t far behind. Naturally, we have big expectations, and the issue with those is they are so easily unmet. It’s good to have such faith in an artist, though. Željko’s proved thrice times over he’s worth it, so I say let’s keep our expectations up here (I’m pointing to my ceiling, by the way). Don’t start making up “SERBIA 2013” t-shirts or anything yet…okay, maybe a mug, or a key-ring.

The MF final is always an occasion of both great sadness (‘cause it’s nearly over) and happiness (I don’t need to explain that). In 2012 it’s also a face-off between the single-named soloists, Loreen and Danny. If the bookies and fans are correct, it’s going to be one of them carrying the weight of Sweden on their padded shoulders. There are actually other acts/songs competing – hard to believe, I know – and here they are:

My picks (the potential winners): Mystery, Euphoria and Amazing.

It’s a strange concept: death growl meets Eurovision. But if there’s any act that can possibly give Loreen/Danny the heave-ho, I reckon it’ll be Dead by April. I don’t really think they’ll win, but I’m just saying, if Loranny (as I am now calling the pair because I’m sick of typing both their names) happen to get abducted by a criminal syndicate hired by Ulrik or Molly (they may look innocent but trust me, they’re harboring psychotic tendencies), I think DBA will end up on top.

Loreen should have been in the final last year, but she’s getting a do over now and you can bet your bottom she wants the top prize. She’s a phenomenal vocalist, and her performance in the semi was the perfect amount of simplicity and show – plus, she’s going in as the favourite and had been #1 on Swedish iTunes for weeks. All she needs is to impress the international juries, and it’s hello Azerbaijan.

Loreen is nearly blown away by her own talent

Danny too, has a heap going for him. He was 2011’s runner-up (as was Eric Saade who came back a year later and won), he’s nabbed the coveted last spot in the running order (as did Saade), he’s a great performer with a striking stage show and a good song, AND he’s also done well in the digital charts. Should he find favour with the juries, it may finally be his time.

My prediction: In my heart it’s Danny, but in my head it’s Loreen, and when it comes to placing a bet you have to use your head. In the fight for 2nd place, I’m thinking Danny, DBA and Ulrik. Molly should improve on the last place from her previous Globen outing. As for this year’s wooden spooner, I’m thinking Top Cats. If they do come last, they may have to change their band name…

Because there is life after Melodifestivalen, no matter how bleak it may seem.

The entry deadline is looming, so the next week will be a busy one. Here’s the schedule, not including the BBC’s vague “next few days” song presentation announcement for the UK:

So we should have a 42-strong list of entries by next Sunday, but whether we will…that’s another matter. There always seems to be one country that waits until the very last minute to make everything official. Tut tut.

Don’t forget to join me on the regular social networking sites (@EurovisionByJaz) tomorrow for an in-depth gossip about What Happened Last Night (which for most people is various drunken activities that need to be slowly pieced together, but for ESC fans is various mini song contests that need to be rapidly and bitchily dissected).