You know the drill. This is Vol. II of my annual awards, during the reading of which you may laugh, you may cry, or you may stop reading this blog because you’ll realise you’re sick of me. Enjoy!

If you have a pair of functioning ears, you cannot accuse me of being biased on this one because I have a preexisting love for Lepland. His voice would be perfection even if he was Freddy Kruger’s uglier brother.

Again, if you have any taste at all, you can’t tell me that my love for Pastora gave her an unfair advantage in the race to win this coveted award. She nailed her vocal at every opportunity, handling the light and shade of her song with ease. And she made me cry, which has never happened before during Eurovision (except for 2010 when Croatia didn’t qualify, and that was with horror/disbelief, not pure emotion).

Artist Most Carried by Their Backing Singers

If I meant physically carried, Ivi would win hands down, but I’m talking vocally. The Greek delegation did a decent job of disguising Eleftheria’s ropey singing abilities, but not decent enough to stop us from noticing them singing every single word along with her. No offence, but how on Earth did this woman make it onto The X Factor?

The Toilet Breaker Award for the Most Boring Performance

I didn’t actually use Iris’ three minutes to use the bathroom, but I still can’t remember anything about her performance except a) that her dress was a tad too see-through and b) that it was boring, which I will admit suited the song well. You’re no Tom Dice, Iris – you can’t just stand there and sing and look adorable and know that you’ll get a ton of votes (I’m not sure he knew that either, but that’s how it was).

Best Use of Instruments

In 2010, it was the Epic Sax Guy. In 2012, it was the Moonwalking Bagpiper who, well, moonwalked his way into (semi) popular culture by kickstarting Romania’s performance of Zaleilah. The MB, combined with the other instrumental members of Mandinga, put on a show that deserves serious praise.

PS – I’d like to make special mention of Tony, the 7th member of the band who could not appear on stage in line with the famed six-person rule, and who probably spent the semi and the final crying in a corner with Russian granny #7 and #8. We love you, Tony! 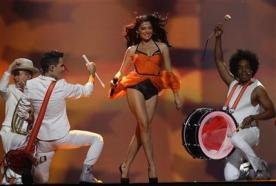 A blindfold for blind love, and a water fountain for Waterline; this sure was a year of literal props. Ireland’s was the most impressive for me, mainly because it left some hair gel for the other 41 artists to use (it was pointless for the Jeds to sport gravity-defying hairdos when they were only going to get soaked at 2.50 in).

Best Use of the Wind Machine

The image of Anggun standing on the stage in the outfit she borrowed from Gisela (Andorra ’08), with that hair and those bits of material flying around behind her, was quite a memorable one – it made Marilyn Monroe’s subway grate trick look positively amateur.

Best Use of Background

I realise the whole ‘majestic sky’ thing has been done (and done, and done…) but it gets repeated for a reason – because it looks freaking awesome. What kind of backdrop could be more suitable for a song called Heaven?

All-Rounder of the Year

Turkey didn’t need a hamster ball or hideous green pants to have it all. They just needed a charismatic singer who could actually sing (as strangely as Can does), pull off a pleather coat/hat combo, and command the audience’s attention. Throw in a troupe of backing dancers who can transform themselves into ships at the drop of a sequin, and you’ve got everything you need.

This award is mainly for Pasha’s support group, who wore some amazing dresses that I would love to have in my wardrobe. Still, I didn’t mind his…whatever that thing was he decided to wear. The whole look was a damn sight better than the tartan nightmare of the Moldovan final.

You cannot wear a ShamWow on your body and half of your front garden on your head and expect to get away with it. I can think of a million things Gaitana could have worn instead that wouldn’t have drawn any comparisons with household cleaning products.

Roman went so casual, I have to wonder if his entourage told him the real thing was just another rehearsal. Some sort of deviation from the street busker look wouldn’t have gone astray on a night when 120 million people were watching.

Eurovision is an all-ages gig, so this category should probably be renamed “Most Flesh on Display”. I am told however, that in the arena it was obvious MJM was suffering from a lack of belt on his pants, which resulted in some indecent exposure. I did want him to perform shirtless (I basically got my wish) but that was more than I bargained for.

The Artist Who Should’ve Packed Their NF Costume Instead

Floaty white trumps baggy black every time, unless you’re attending a funeral. Or a wedding for that matter – upstaging the bride is a rather large no-no. Anyway, Nina’s decision to wear a rubbish bag was a bad one.

Hairdo of the Year

It’s safe to say there was no hairstyle quite like Rona’s elsewhere in Baku. Her orb of dreadlocks also wins her the EBJ awards for Heaviest Hairdo and Best Inclusion of Hair Into a Costume. 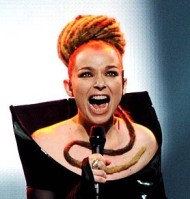 I Can’t Believe You Didn’t Qualify!

There weren’t a lot of shocks in terms of qualifiers this year, but Slovenia’s failure to make the final did catch me off guard. Not only did Eva miss out, but she missed out by a mile, ending her semi in 17th place.

I Can’t Believe You DID Qualify!

For the second year in a row, Lithuania shocked me by advancing, only this time I was happy about it. It will be interesting to see whether the juries, the viewers or a combination of both allowed Donny a Saturday ticket.

Most Destined to Qualify

Had Loreen not qualified, it would have been THE jaw-dropper moment of 2012. It would have made it slightly harder for her to win, too…

Something as dated and clichéd as Aphrodisiac (if extremely catchy) well and truly deserved 17th place. I think Greece are now aware that they are not guaranteed a top 10 placing because they are Greece, which will hopefully lead to a more original song representing them in Sweden – if they have enough money to send one by then.

This is the second time in five years that my favourite song has come last in the final, the other being 2009. Back then, I could see why – Lose Control just didn’t work live. But I think Tooji’s Stay, and Tooji himself, really did. I can only assume that the juries and the voters didn’t vote for him because they liked other entries more, not Norway’s less.

That’s it, ladies and gents. The EBJAFEEs are over for another year, or at least until December when I’m thinking about holding some EBJAFJEEs (does the extra J for Junior push it over the edge?). I hope you liked them. They won’t be the last you’ll see of Baku on this blog. With the split results still to be released and my willingness to move on from this year’s contest still to be located, it’s just not time to look ahead to Amsterdam and Stockholm (read ‘Stockholm’ as ‘miscellaneous Swedish city’). I apologise.

Do you agree with my picks of the best and worst of Baku? Let me know below!