Here we are yet again at one of the most active evenings on the pre-Eurovision calendar. It’s Saturday night, and I’m doing what every self-respecting contest obsessive does – not leaving the house in favour of listening, watching, nodding and/or gasping in horror at all the national final action.

Tonight that action is as follows: Croatia presents its song for Nina Badrić; Italy’s San Remo Song Festival ends with a winner and a representative for Baku; Latvia and Ukraine make their final decisions; and Sweden heads into week three of competition with the 3rd semi final of Melodifestivalen. All that plus a few little somethings extra is what I’ll be covering on this warm/cool evening (I’m trying to cover all bases and reader locations here, people). Here we go.

PS – I would also like to mention that this is my 200th post *cue balloons and streamers falling from the ceiling*. Feel free to send me congratulatory gifts. You don’t expect any to you from me, right? I mean, I’m not Oprah.

All my life I’ve been standing still

I’m going to start with a brief mention of the most recent songs to be added to the Baku pile. On Valentine’s Day while I was cruising on a yacht in the Mediterranean with my oil heir boyfriend Pierre (that may be a lie) Belarus chose Alyona Lanskaya and All My Life to represent them. Having previously heard three of the Belarusian finalists, one of which was Alyona, I was hoping for a win from Litesound, but they could only manage second place. I think Belarus has taken a forward step by picking All My Life – they’re obviously taking things more seriously this year (although let’s wait and see if this one gets disqualified for breaching some sort of code of practice, e.g. the one brought in for 2012 that states no artist should wear a mullet dress because they are so last year).

Having said that, I’m not jumping for joy over the song. It’s a ballad of the dramatic-but-depressing variety, much like Lithuania’s 2011 entry, and though I like it more than I liked C’est Ma Vie, it’s already a dud in comparison to the songs from Norway and Cyprus, for example. I’m not going to discount it from qualifying just yet, because I was certain Evelina would be stuck in the semi and that turned out not to be the case.

Moving on to Germany now, and last year’s hosts finished up Unser Star für Baku on Thursday by making Roman Lob and Standing Still the last one standing (don’t pardon the pun – it was totally intended). It’s a song with credentials, having been co-written by the UK’s jazzy Jamie Cullum who features prominently in my mother’s CD collection, but it does come across a bit too ‘I’ve just won American Idol and this is my winning song that will be shoved down your throats for the next month’. Maybe I’m just confused having experienced two straight years of Lena and I don’t know how to react to anyone else or their music. I think Roman needs to wear a wig and an LBD on stage to wean us all off Miss Meyer-Landrut. 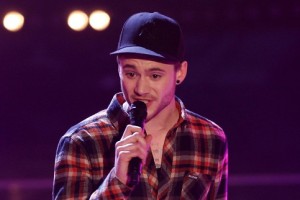 Roman tries to explain that no, he is not Lena in disguise

In lieu of the above songs bringing the heard total to 11, I thought now would be a good time for my first 2012 ranking. Here’s my scoreboard so far…

Amazingly, I have nothing to say about the above five finals due to a combination of not listening to the contenders, not knowing who the contenders are (in Italy’s case) and not having enough information to even form a sentence (in Croatia’s case). I will say that I did not accidentally omit Georgia from my intro – their final is taking place tomorrow night, so it’s still part of the weekend, just not of this Super Saturday.

Now it’s time to discuss my favourite part of the evening, courtesy of the Land of IKEA and ABBA. Sweden’s marvelous Melodifestivalen continues with eight more acts competing for four coveted spots (two more coveted than the others). This week’s acts include the lone winner of the Webjoker section, Maria BenHajji (I was fortunate enough to hear her song back in November before SVT ripped it off Youtube faster than a wax strip off a cyclist’s shin) as well as 1/3 of my favourite Swedish boy band EMD, Love Generation, and Eric Saade’s lady love Molly Sandén.

My picks: Förlåt Mig, Just A Little Bit, Why Am I Crying and Mirakel.

It will be interesting to see what happens if both Mattias and Danny Saucedo (who’s in next week’s 4th semi) make the final as former members of EMD. I don’t think Mattias could outshine Danny when it comes to the crunch, however he has got, for me, the best song of this semi. It’s a Swedish-language R & B track that he wrote and composed himself, which is always appreciated.

Love Generation are back minus one member, and RedOne has written them a song that’s a little more pop-rock than dance, and probably more accessible. It’s not an absolute standout but it’s catchy enough to make the top four, which is where everyone wants to be (unless somebody’s life goal was to lose a Eurovision preselection).

After hearing Molly’s latest single at JESC I was expecting great things from her Melodifestivalen entry. Why Am I Crying didn’t quite live up to my expectations, but it’s a nice ballad with nice lyrics that will no doubt show her voice off. I’m a bigger fan of this than of the song Molly performed the last time she entered MF, which got her straight to the final.

As for Mirakel, there’s only one teensy problem – the dude. Get rid of the dude! For those who don’t speak 1990s, I’m referring to Bjorn, who does some kind of middle-aged rap throughout the song that ruins Sara’s awesome choruses. If it was ‘Sara Li feat. One or Two Very Quiet Words From Bjorn Ranelid’ this would do well.

My predictions: I think this is the weakest semi so far, which makes it just as hard to predict as a good one. My guess is that Love Generation will get all the way to the final this time round, as well as Andreas Johnson. As for who’ll make Andra Chansen, I’m going to say Youngblood and Mattias. I’m actually hoping to be wrong…

Voila! Another weekend overview done and dusted. Don’t forget to attach yourself to whatever device you use for your social networking tomorrow, because we’re going to need to talk. In a completely non-serious way.

Do you think tonight will produce a winner? What’s your favourite song for Baku so far?