I know, I know…national final season ended weeks ago and the world has moved on. Eurovision In Concert is tonight, for Serhat’s sake! But you guys are used to me being behind the times, hopefully in an endearing, ‘Oh, that Jaz and her constant lateness to the party’ kind of way. And you can’t expect me to leave those crazy months of NFs behind yet. Not before I’ve acknowledged the musical gems that may not have won through in the end, but showed so much promise that in some cases, it’s worth a dramatic soap-opera wail because they didn’t.

Last time I listed every single second-placed song from the 2019 selection season, which you can revisit (so sweet that you’d want to read it again, you super awesome human) or check out for the first time (what are you waiting for? JEEZ) here. This time I’ve restrained myself and chosen six of the best songs that finished 3rd or lower in their respective NFs – so they weren’t really in contention when it came down to it. That makes their quality even more impressive.

PS – Don’t worry, this isn’t just a six-strong list of Melodifestivalen songs. I mean, I could have chosen six from Sweden alone, but not wanting to be too predictable I forced myself to pick only one song from each country in question. My willpower > your willpower.

PPS – Or not. I don’t know if this counts as cheating, but you can find a full playlist of all of my favourite NF songs from 2019 at the end of this post. I’d been putting it together as the season progressed and then “accidentally” embedded it below. Whoops.

Now, let’s get down to business. 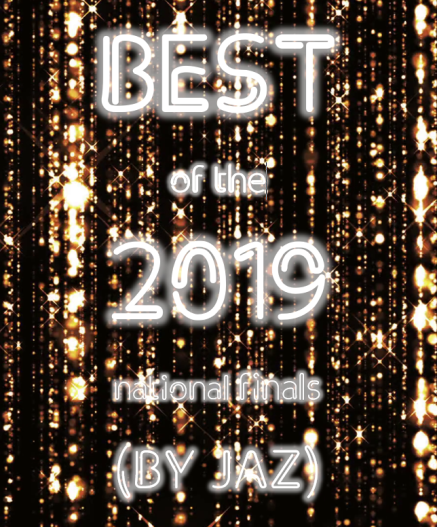 I remember being underwhelmed when this song came out. Sheppard was one of the biggest and most internationally-known acts competing in Australia Decides – and On My Way was kind of…average. But first impressions never last, as they say. The more I listened to it, the more I liked it and the more likely I was to scream with excitement every time it started playing on the radio (which is embarrassing at work). At this point, I have it pegged as an anthemic, infectious singalong song: just the sort of thing Sheppard does best. I actually wouldn’t have minded sending these guys to Tel Aviv instead of KMH (but not instead of Electric Fields).

I know I’m in the minority, preferring this song over literally everything else Germany had to offer, but I don’t care. The performance would have needed to level up if Linus HAD won ULfI (and Guy Sebastian might have had something to say about those LED streetlights) but even so, I honestly think Our City was Germany’s best option for Eurovision. It’s radio-friendly but still competitive, urban and catchy, and has a chorus that would have had thousands of arms up in the air in Tel Aviv (still attached to bodies, fortunately). The best thing I can say about Sister, on the other hand, is that it’s packed with girl power.

For those of us who get (potentially too) invested in certain songs during NF season, losing them along the way can be heartbreaking. I never expected Olivér, on his first A Dal attempt as a soloist, to win the whole thing – but I also didn’t expect him to crash out and not even reach the semi-finals. How is that possible with a ballad this beautiful? Világítótorony is pure class, quality and emotion, and gave me all the physical feels: goosebumps, spine tingles, watery eyes that I would blame on allergies, etc. It’s been months and I’m still both devastated and outraged that it didn’t make the (semi-final) cut.

I’m not convinced about the title of this song or the group name (one’s too novelty, the other is straight out of 1995…which makes sense since they’ve been around since 1993). But those are just personal pet peeves. Song-wise, bubblegum disco pop for millennials has never d’sounded so good! Mr. Unicorn is pure fun from start to finish, but it’s still slick and contemporary – like a Scandipop/Scandilove/Daft Punk love child. I’m a fan of Spirit in the Sky, don’t get me wrong. But I would have been over the moon if D’Sound had kept their winning streak from the jury vote going through to the Gold Final and then the battle between the last two acts standing.

I Do Me, Malou Prytz (Melodifestivalen, Sweden)

As I mentioned before, this whole list could have been based on my favourite Melfest 2019 songs – but so you guys didn’t have to roll your eyes at my Swedish obsession yet again, I made the sacrifice. After hours of deliberation (no joke) I went for I Do Me because a) it was such a surprise package and a great debut for Malou; b) it’s so cute and catchy I cannot be in a bad mood after I’ve listened to it; and c) I love Clueless, so the inspiration for the staging and Malou’s outfit (which I want a dupe of SO BAD) was right up my street. The cherry on top of all this goodness was the artist/songwriter reaction to going direkt. Their ‘Us? Really?!?’ face were adorable.

First things first: the live performances of this song at Vidbir were vocally questionable at best. But in studio, like everything else KAZKA produces, it’s sublime. I have no doubt that if Apart had won the NF and no drama had followed, the performance would have been whipped into shape in usual Ukrainian style and been a contender for a great Eurovision result. In this reality though, I’ll just keep streaming the shiz out of the studio version and particularly enjoying the mysterious chanting towards the end. Is it a troupe of Ukrainian grannies á la Buranovskiye Babushki? Who knows, but I think they’re saying ‘KAZKA must get to Eurovision ASAP…oh, and Tayanna, of course’.

Listen to all of today’s tracks (plus many more) right here:

Which songs didn’t even reach 2nd place this NF season but ended up on your best-of playlist? Let me know below!