Hello there. Remember me? After the longest ad break in history (and after breaking my vow to finish these awards by the time the Eurovision 2018 DVD was released, OOPS), I’m finally back with the second EBJEE presentation segment.

This time, the trophies re: all things performance-wise will be presented, including three more People’s Choice Awards. That means everything from drama levels to dance moves, money notes and costume choices is about to be honoured by yours truly (and by you truly…I had no part in deciding the People’s Choice winners, obviously). So without any more ado than I’ve already adone, let’s get this party started! 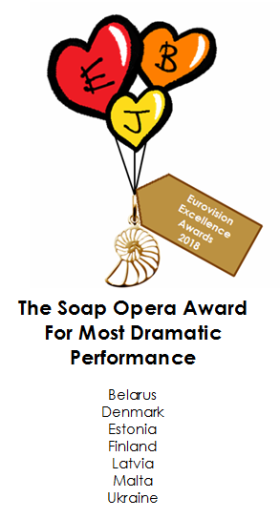 Okay, so you’re not going to find Rasmussen and his bearded stagefellows on Coronation Street or the Bold and the Beautiful (for starters, their acting skills are too superior). But they went beyond the small screen and straight onto the silver screen with the cinematic level of drama they served up in Lisbon. Intense smouldering stares, manly stomping and a fake snowstorm that whipped all that hair back and forth majestically…what more could you want? If a Scandinavian hipster version of Pirates of the Caribbean was ever produced, this is what it would look like.

I asked you guys to vote for the most totes emosh (DID I JUST TYPE THAT?!?) three minutes of Eurovision 2018, and you delivered by crowning Michael Schulte’s tribute to his late father the winner of this tearjerking People’s Choice trophy. I’m not about to argue, even though I didn’t “feel it” with You Let Me Walk Alone until the ESC performance rolled around, feat. backdrop photos and lyrics that made the message extra clear. But hey, all the feels were present and accounted for when it mattered most.

This gong goes to a performance that had the hairs standing up on the back of my neck, goosebumps popping up on my arms and of course, tingles shooting up and down my spine. I don’t know about the rest of you, but Elina Nechayeva’s haunting delivery of La Forza came straight to my doorstep in Chillsville and affected me from top to toe. At one point I actually thought I was having an aneurysm and considered calling an ambulance, but then I realised it was just the glass-shattering notes messing with my middle ear.

Who knew a piano could be so multifunctional until Mélovin gave us that stellar live demonstration? It’s handy for anyone musical who can only afford to live in a tiny studio apartment to know that there’s an instrument that can double as a bed. What a space-saver! Mélovin, of course, was using it more as a coffin (or according to the artist himself, as a uterus from which he was birthed in a matter of seconds…seriously). But each to their own.

Here’s another People’s Choice Award I’d struggle to argue with. Moldova (or ‘Russia 2.0’, as they were known this year) clearly have no qualms about sourcing stage props at Ikea: first it was the mirrors from the Moldovan NF, then the super-sized cabinet they lugged to Lisbon. But there’s nothing wrong with that. It often happens that the simplest things are the most effective, and DoReDoS proved that spectacularly.

When one door closes, another one opens…frantically, in Moldova’s case.

Speaking of Moldova…it wasn’t just the furniture they used that made My Lucky Day so successful. The DoReDoS doppelgangers played a big part in that too. What would this performance have been without them? An extra enthusiastic high five goes to the guy who had to swap his shoes for heels at one point (I’m not ashamed to admit I have still have leg envy). 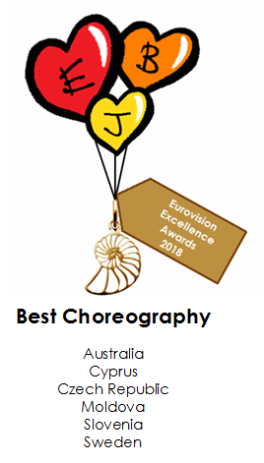 I gave this award to Sweden last year, and I’m doing it again for a similar reason. Both Robin Bengtsson (and his backing dancers) and Benjamin Ingrosso didn’t just bust a move on or around a stage prop, but with a stage prop – and both performances were flawless. In Benjamin’s case, he was working in harmony with lighting, and transported us to an ultra-cool nightclub where sneakers are in the dress code and slick dance moves are mandatory.

The cartoon instruments, question marks and soccer balls etc scribbled on screen by Norway added an element of cute to Alexander Rybak’s performance that made it seem all the more appropriate for Junior Eurovision – but I wouldn’t have ditched them from his adult Eurovision stage show. Without that little extra something, That’s How You Write A Song live wouldn’t have been quite so memorable (marginally…it still would have had Eurovision’s biggest runaway winner ever fronting it, after all).

It’s often said that less is more, but at the ESC more is more just as frequently. We bounced from a bare-bones winner in 2017 to the opposite in 2018 with Netta – not the performer who threw the absolute most at their stage show, but the most successful one to make things flamboyant. Lights, lucky cats, crazy costumes, clucking backup dancers, explosions…just the basics for Israel’s three minutes.

When it comes to the most perfect package deals of this year’s contest – where vocals and visuals were so on point you could practically cut yourself – nobody was as flawless as Cyprus. Armed with a Swarovski crystal-studded catsuit, a quartet of dancers almost as fierce as herself and a slick Sacha Jean-Baptiste staging concept, Eleni did no wrong. She proved to everyone skeptical of her abilities to perform live (I used to be) that she’s worth the hype. 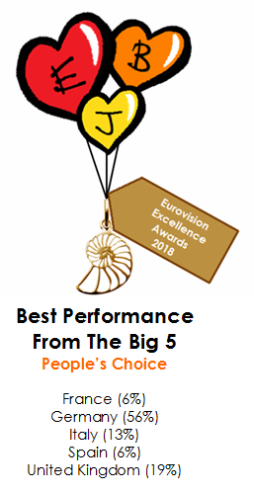 Germany’s was the highest-scoring performance of the Big 5, and you guys clearly agreed that their 4th place was earned with this People’s Choice pick. To be honest, I think all of the automatic qualifiers put their best possible foot forward this year, which didn’t pay off all round. But Germany won’t be worrying about that when they can just sit back and languish in their success. 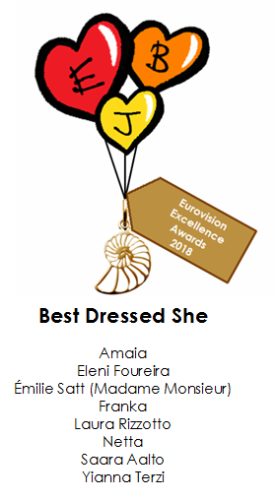 I’ve already mentioned Eleni’s catsuit in passing, but as ladies’ costumes in Lisbon go it’s worth an award all of its own. Leaving just enough to the imagination, combining crystals with leather and being just as hot as Fuego called for, this outfit couldn’t have been better (cat) suited for Cyprus in 2018. It should be displayed in the Louvre in close proximity to the Mona Lisa. Or at least in the Eurovision section at Stockholm’s ABBA Museum. 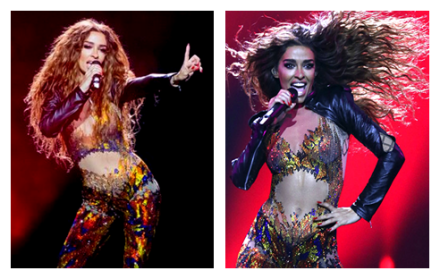 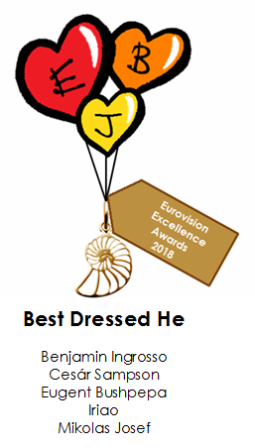 I have a bias towards anything and everything Scandinavian, including the fashion – so don’t be surprised by this pick. As unsure as I still am re: Benjamin’s shoe choice, he did pull the look off. Plus, the positives of his toned-down-from-Melfest jacket selection and the decision to actually wear said jacket like a normal person this time outweighed any negatives. 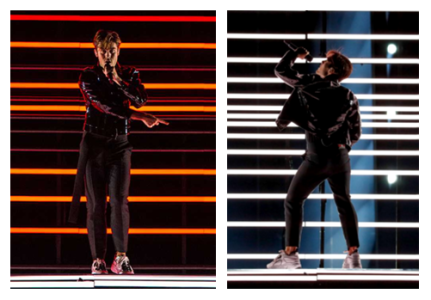 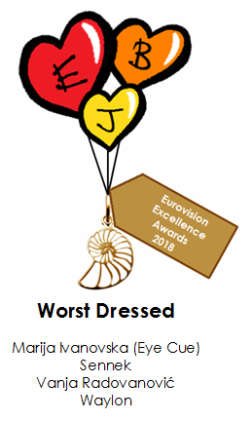 There was no competition here, really. I’m struggling to think of another fashion disaster from the entirety of ESC history as momentous as this one from Macedonia. Neither of Marija’s outfits even sound good on paper – a shiny pink tuxedo jacket feat. armpit cutouts worn backwards, followed by a wildly unflattering knitted playsuit? NOPE. As gorgeous as she is, nobody could make those work. A Barbara Dex Award well deserved. 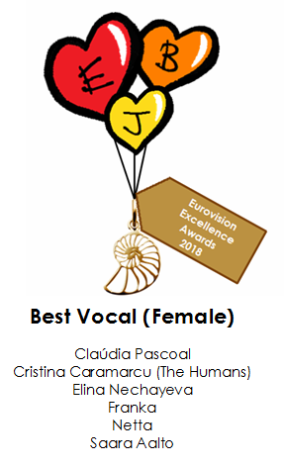 There hasn’t been an ESC female vocal as consistently faultless and hauntingly beautiful as Elina’s since Jamala’s, so I had to hand this trophy her way. ‘DAMN, GIRL!’ are the words that come to my mind every time she opens her mouth. What she can do with her vocal cords is beyond belief, and I’m 50% amazed, 50% jealous (she’s two months younger than me, FFS).

I don’t know how you solve a problem like Maria (musical theatre reference alert) but I do know how you fill an arena like Eugent: by singing your ASS off. This guy can project his powerful voice for miles without seeming to break a sweat, and I could listen to him do it all day long. Even among the numerous other strong male voices of the year, he stood out.

I’m sensing this could be a controversial choice (as controversial as I get, anyway). Alfred, I’ll admit, is the weak link in this pair, but I actually like how his raw-edged vocal blends with Amaia’s delicate, high-clarity diamond of a voice. They were never fighting each other for the spotlight (which happened a bit with Equinox), instead balancing each other out. 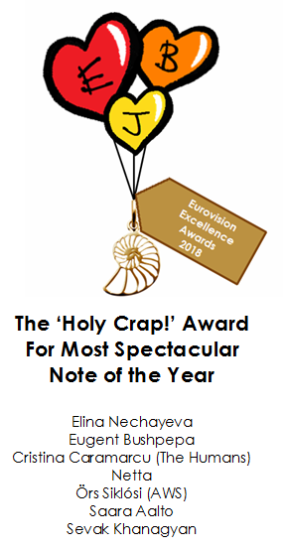 Estonia’s opera diva strikes again! You know someone’s impressive when there’s not one, not two, but a whole bunch of mind-blowing notes peppering their performance. I don’t think I need to justify this one any further.

Every national final winner has at least two months between their crowning moment and Eurovision to pimp their performance and polish any questionable vocals. Some don’t change a thing when they really should, some don’t because they don’t need to…and then there’s countries like Moldova, who (with that Russian input) took a perfectly adequate NF stage show and transformed it into something none of us will forget in a hurry. DoReDoS said that body talk is magic, but so was their performance.

That’s all for today, peeps…but what do you think of the winners? Which Portuguese performances deserved these EBJEE trophies in your eyes? Let me know below – then prepare yourselves for the final (very late) lot of my Eurovision awards for the year, feat. The Show and The Results!

2 Responses to “THE 2018 EBJ EUROVISION EXCELLENCE AWARDS | The Performances”