Hej och välkommen to another Super Saturday! The Eurovision calendar of events is fuller than Linda Wagenmakers’ skirt this weekend, and I refuse to even think about how it compares to my social calendar (not that I need one when there’s so much NF action keeping me occupied). We may only be getting the gift of one more entry for Lisbon tonight, but there are loads of semi finals going on and paving the way for a full house of songs. The fact that 2018 entries are trickling in at the moment just means we have time to make up extra beds and pull together a sufficient snacking platter.

If that list doesn’t offer something for every Eurofan, then I’ll denounce my unconditional love for Lane Moje. It’s so long that little old lonesome me can’t possibly talk about it all. So, in keeping with shows I’ve already covered this season and shows I’m waiting until later to discuss, I’ll only be talking about a) what’s happened in the world of Eurovision 2018 over the past seven days, and b) Melodifestivalen (duh, says the Swedophile) in this post. I know what you’re thinking…

…but the day I both become Superwoman and stop considering Melfest the pinnacle of national finals, I’ll let you know. 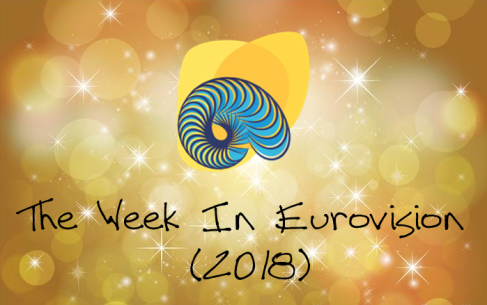 We may not have welcomed too many tracks into the family this week (as I said, they’re trickling through like treacle this NF season) but a heap of stuff has happened regardless. Don’t believe me? Well, the proof is in the pudding, a.k.a. in the following rundown of bits and pieces.

The newest of brand-new songs heading to Lisbon (at this stage) is from Belarus, with Alekseev oh-so-predictably winning Eurofest with Forever on Friday night. Despite visually stunning staging, the “revamp” of the song has really just served to make him sound like he’s performing the original version wrong, and I’m not 110% convinced we will see/hear him sing it in May. But Belarus would be smart to keep him as their artist – and even smarter to show him off to his full advantage with the Russian version of Forever (if possible) or a totally different, non-English song altogether.

Denmark gave us a fabulous beard and a Viking anthem last weekend, as redheaded Rasmussen stormed to Dansk Melodi Grand Prix victory. Even though Higher Ground doesn’t sound remotely 2018, it’s very Eurovision and a definite statement piece – unlike some of the bland, wallpapery songs Denmark could have chosen this year and HAVE chosen in the past. Still, that second semi of death beckons, and it’s a question mark whether or nor the Danes will survive it.

Artist announcements – some with songs, some without – were fired out of the cannon at a rapid rate this week. Croatia is sending Franka Batelić with Crazy (which I’m sensing we’ll hear sometime between now and mid-March); Greece, after a mess of an NF lead-up that has resulted in no NF at all, has opted for Gianna Terzi and Oneira Mou (which is Greek-chic and 10x better than This Is Love IMO); Israel crowned Netta Barzilai the champ of Rising Star (which in addition to stars, rose questions re: vocal manipulation and how much of it Netta will be permitted to do in Portugal); and Macedonia revealed that Eye Cue will represent them with Lost and Found (let’s hope the song’s better than the band name). Planet Eurovision is a busy place to be in February, that’s for sure, even when it doesn’t feel like it.

Finland’s second song for Saara Aalto, Domino, premiered on Friday in the wake of the well-received Monsters. Pros: it’s a pretty modern power ballad that Saara handles with ease. Cons: the lyrics are made up of one cliché after another (the wrecking ball simile has got to go). Monsters is the best option so far, but if Domino is the worst YLE has to offer, Finland deserves a high five *smack*.

After approximately 65 years, Italy’s Sanremo festival concluded with Ermal Meta & Fabrizio Moro taking home top honours and accepting the invitation to go to Eurovision. Non Mi Avete Fatto Niente is not set in stone as the competition song though – back in 2012 Nina Zilli swapped out Per Sempre for L’Amore É Femmina (I was not a happy camper), and a swap may well happen again. So the moral of this story is, maybe don’t include Italy in your rankings just yet.

Semi number two of Sweden’s Melodifestivalen saw an expected result: Samir & Viktor + LIAMOO direkt, Margaret + Mimi Werner to Andra Chansen. Boy, do we need some girls in that final ASAP! I am happy that for the first time ever, I predicted a Melfest heat completely correctly, but that’s probably testament to how see-through the semi was. My favourite was LIAMOO, so DTF = woohoo, but I must say that Mimi’s staging was beyond brilliant. I love you John Lundvik, and I’m a let you finish, but Mimi Werner had the BEST FIRE CURTAIN OF ALL TIME.

Sweden’s traveling stage has been set up in ESC 2013 headquarters this week – Malmö Arena. Sadly Petra Mede won’t be popping up from underneath it in a John Paul Gaultier creation, but what WILL happen is…*unnecessary drum roll* seven more songs will be sung in a fight for a top 4 finish. And here they are:

To all those saying that this is the worst edition of Melodifestivalen ever…well, I can see where you’re coming from. It certainly doesn’t measure up to any of the years I’ve been following it like the crazed fan I now am (2011 onwards) with just one semi left to lift the overall standard (unlikely). But I have no doubt that the March 10 final at Friends Arena is going to go off – there are four very good songs there already, after all; four to come; and four others to emerge from AC, which will be the best of the rest. And it only takes one song to kick butt at Eurovision, so let’s have some faith in Björkman (even if you can’t stand him, you can’t deny his ability to engineer excellent Swedish results) until it’s proven we shouldn’t, K?

Cry Firstly, I just want to say how much I loved Dotter in Practical Magic (and that Academy Award? You go, girlfriend). Okay, so maybe she and Nicole Kidman ARE different people (have they ever been seen in the same room at the same time?). But they’re both very talented, and Dotter has the most intriguing snippet of the seven this week. The originality factor isn’t very high, however, since the comparisons to this are obvious.

I can’t be the only one actually seeing double…

Party Voice Mello wouldn’t be Mello without a touch of schlager, and Jessica Andersson is the perfect woman to serve it up – with a side of EDM, no less. It’s a big change from her last shot at getting back to Eurovision (long shiny dress + ballad) but for the better (or for the equally good). I have my ears at the ready to hear her party voice.

Everyday Apparently this is The One of the semi – the one Björkman wants us all to fawn over. I’m a little surprised – is it that special? – but I do like the sound of it, predictable lyrics (you and me/meant to be…no thanks) aside. It taps into the Latin pop trend nicely, and the chorus is catchy and fun.

Stark I’m on my own with this one, but it really stands out to me as a dance track with a melancholy feel. Of the three Swedish-language songs competing in Malmö, it’s my top pick.

So, who’s going direkt til final? Mendez + Dotter. This prediction goes against betting odds and the weekly audience poll, but I’m afraid I don’t get the DTF appeal of Martin. And I desperately want some womanly representation in that final! Mendez will sail through, but I really think Cry is the song that deserves to get a golden ticket.

And who’s off to Andra Chansen? Martin + Jessica. No, I wouldn’t be surprised if Dotter is bumped down to AC by Martin regardless of what I just said, but A Bitter Lullaby screams second chance. I’ll be mad if Jessica’s journey ends pre-AC, unless it’s because of Barbi…but that’s not happening.

What do you think? Will we get some much-needed girl power delivered to the Melfest final tonight, or will it be dudes direkt yet again?

And that’s my cue to leave, ‘cause it’s traditional pre-3am power nap time. Whether you’re gearing up for the NF of your choice by sleeping or not (which depends where you’re living in relation to CET), do whatever you’ve got to do and enjoy what you’re going to watch. The selection season’s going so fast, we have to appreciate it while we can!