The reason for my lateness is the same as always: life, its craziness, and the annoying need to prioritise ‘other stuff’ over Eurovision stuff. It sucks, doesn’t it? But I figure that if you love the ESC as much as I do (unconditionally, and with a burning desire not unlike the one Kasia Mós mentions in Flashlight) then you won’t care which contest I’m discussing and when. A.k.a. you won’t mind that I’m still talking about the 2017 show like it happened two weeks ago.

On that note, here’s the last lot of EBJEE trophies for the year feat. the awards for The Show and The Results! You’ll find all of the remaining People’s Choice Awards below too, so if you can remember who/what you voted for (the polls were open back when dinosaurs roamed the Earth, after all), then you’ll now be able to see if your picks came out on top.

Enjoy, and let me know who your show/results statuettes would go to in the comments… 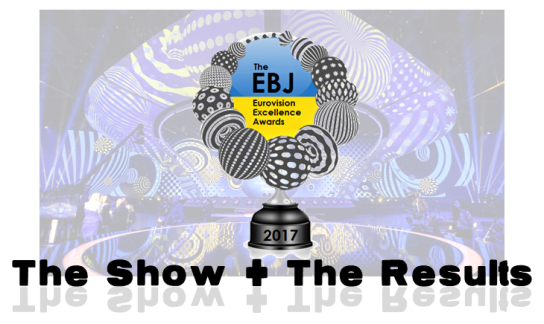 I have to agree with you guys on this one. In a strange turn of events, I personally thought that Timur – who’s co-hosted Junior Eurovision twice – was the weakest host (or at least the most wooden. If you’d touched him on any of the three show nights you’d have gotten a splinter). Oleks was an improvement, but Vova’s role as the class clown (and, I can’t deny, his Disney prince-level good looks) gave him extra appeal.

I’m a little surprised that ONUKA was the overwhelming winner of this award, but that’s probably my Jamala superfan status skewing my perspective (I would willingly watch her gargle the alphabet). It was no Love Love Peace Peace, but the megamix was another example of Ukraine putting all their best musical feet forward when they had the chance.

Unlike in 2010, when Jimmy Jump crashed Spain’s performance and fooled us all into thinking it was supposed to happen for a good ten seconds, we all knew something was up when one of Ukraine’s own (draped in an Australian flag, which had all of us Aussies dying of embarrassment for a while) put the ass into the class of Jamala’s satellite stage serenade. It was the most iconic OMG moment of the 2017 contest by far. 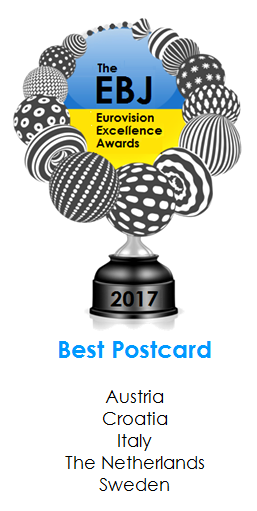 Am I the only person disappointed in the postcards this year? They were both boring and a little bit all-over-the-place. Still, like shopping in a secondhand store, if you take the time to sift through all the crap you will find a few gems. The revelation that Amy Vol is a shoplifter (well, she would be if she didn’t have two sisters stopping her) nearly secured the Netherlands this trophy, but Italy’s group of Gabbanis was unbeatable. If that restaurant was real I’d be booking a table ASAP!

Now I know how Iceland’s DNQ made Greta fans feel last year. Back then, I was all ‘Whatever!’ as someone who thought Hear Them Calling was pretty mediocre. But then Blackbird came along and broke my heart with its failure to make the final. I still don’t get it, and I can imagine myself in the same situation fifty years from now (as I wave my walking stick around wildly and croak stuff like ‘Norma John were robbed!’ at randoms on the street). 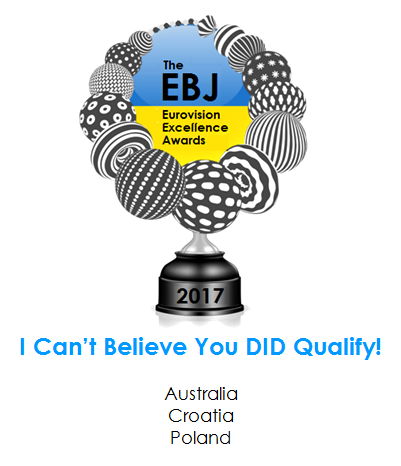 No country’s qualification this year really, truly shocked me. But (and it physically pains me to say this) after Isaiah’s semi performance, I had serious doubts about Australia going through. I still think I was right to worry, and it gives me heart palpitations knowing that if it wasn’t for the juries, it would have been third time unlucky for us.

It’s safe to say that when we’re making our semi predictions each year, the little list of countries in the ‘Definite’ category always includes Sweden. Even in 2010, the only year they didn’t qualify (which I’m still not over, BTW), they were confidently predicted to make it. In my mind there was no way in the world – this one, or any parallel universes that happen to exist – that Robin Bengtsson was going to miss out on the final. Another Anna Bergendahl he was not. 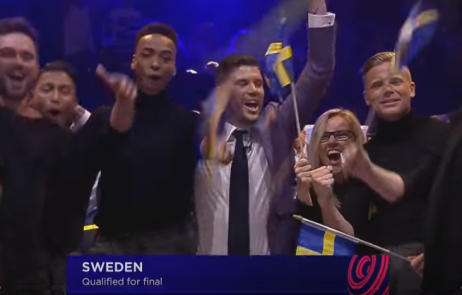 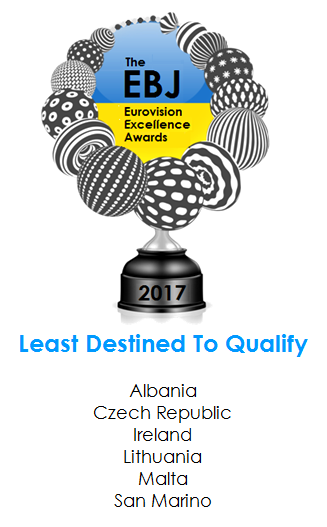 On the other end of the spectrum lies Lithuania, whose mammoth NF marathon did not produce a surefire success this year. Rain of Revolution was the complete opposite – a for-sure failure that only outdid expectations by NOT finishing last in its semi. Fusedmarc’s night wasn’t the kind that Donny Montell was waiting for.

When it comes to Eurovision, the population of Struggletown often includes Moldova. They’ve taken the serious approach before (2007, 2013), and brought the fun (2005, 2008, 2012), but neither had ever taken them higher than 6th place – and that was back in their debut year of ’05. Enter Sunstroke Project (take two). Their performances of party anthem Hey Mamma ticked every box without being try-hard, and whenever I think about the fact that they got such a great result, I want to weep with happiness. I guess Kyiv’s a good luck charm for Moldova!

What more can I say about this without shaking salt into a blackbird-shaped wound? Finland’s 12th was undeserved because Norma John should have been higher, not lower. Hashtag heartbroken; hashtag sadface; hashtag stop using hashtags outside of social media, Jaz. 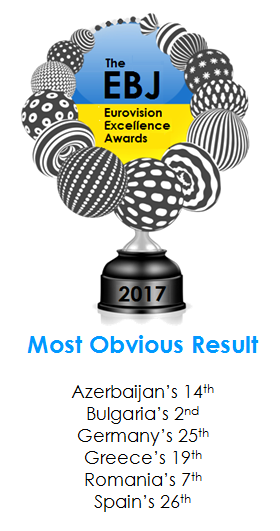 If the ‘it’ in ‘do it for your lover’ = gallantly volunteer to finish dead last in the final so nobody else has to, then Manel lived up to his song title like a champion. I personally would never launch a hate campaign against DIFYL (in certain contexts, it’s an enjoyable listen) but I knew it was headed for position 26 on the scoreboard. Aurally it’s not a competitive song, and visually it came off tacky and amateurish (not Manel’s fault). The shock value of Spain’s result was zero.

You guys voted, and I can’t deny that you picked a major-league shocker. All those YouTube views! All those OGAE poll points! All those months as bookies’ fave to win! All that pre-show hype! It seemed like Italy had the win signed, sealed and delivered to Francesco’s door before rehearsals even began in Kyiv. Once they did, it was either a win or a solid top 3 result on the cards…wasn’t it? Well, no, as it turned out. Italy was even squeezed out of the top 5, by the same country (Sweden) that nudged 2016 OGAE winner France into 6th last year.

That’s it! I have to say, it’s a relief that I finally get to roll up the EBJEE red carpet for another year and move on to some of the awesome Eurovision entertainment I have planned for you this off season. But first, I want to know what you thought of this third and final awards announcement – and as I said in the intro (scroll up for about a half hour and you’ll find it) which people and places you’d pick as your personal winners. Let’s see if we have anything in common…even if the fact that we’re all Euronerds means we’ve needed to agree to disagree from the very beginning of our fan lives.