If speculating which artist will – or should – succeed Guy Sebastian as Australia’s Eurovision representative was a fiesta for the online Euroverse, then I am seriously late to the party. But that’s not unusual. And, technically, it’s never going to be too late to muse about that until the actual artist’s name is announced sometime in the new year.

So, on that note, I HAVE MUSED! As it’s Friday, I’m about to present my shortlist of Aussie acts who’d be sensational in Stockholm to you – accompanied by gushing justifications, of course – as another Fast Friday Five.* Some of them made it onto my previous, pre-Australian participation list; others I didn’t even know existed back then. Altogether, they’re an eclectic mix (by my standards) and I reckon SBS should keep their names handy as they muse themselves. But I’m über biased in saying that.

Have your own suggestions for ‘Straya at the ready, because my comments section just told me it’s dying to hear them – and I’m pretty curious too!

*I may have slipped a sixth pick in, hoping you wouldn’t notice. And I’ve just realised that explicitly drawing your attention to that now has eliminated all chance of you not noticing. Eh, whatever. My blog, my rules. 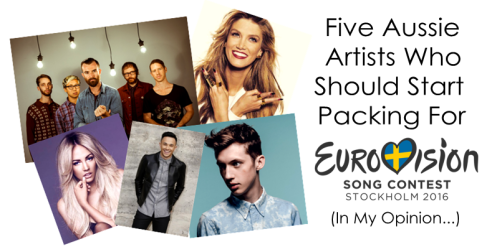 Who? BoT are a five-piece alt-rock band from Perth, Western Australia (as am I…boy, this city is just PACKED with talented people!) and they’re probably the most stereotypically anti-ESC artists on this list. You won’t catch them whipping off their trousers to reveal sequined hotpants halfway through a gig, or busting any Loreen-esque contemporary moves on stage – but I would be very interested to hear what they’d come up with for the contest. I think what we could expect from them is a simple-but-effective stage show (á la Softengine’s last year) and a very authentic, quality rendition of something that could be labelled ‘rock-pop fusion with an edge’.

Think…Nadav Guedj and John Karayiannis, if they miraculously procreated

Who? Last month, 19-year-old Cyrus Villanueva was crowned winner of the X Factor Australia’s seventh season – thanks, I’m pretty sure, to my feverish, fangirl-induced voting in his favour. This dude can sing absolutely anything flawlessly, and that would certainly be beneficial to ranking highly in the jury voting at Eurovision. He’s multi-talented, playing the guitar and the piano (sadly, not at the same time); bounces between soulful ballads and silky-smooth r & b without batting an eyelid; and has all the charisma required to create a connection with a big crowd. If X Factor judge Guy Sebastian puts in a good word for him, who knows – we could be seeing him hit the stage in Stockholm. Fun fact: Cyrus’ debut single Stone was co-written by Bobby Andonov, who represented Macedonia in Junior Eurovision 2008. IT’S A SIGN!

Must-hear tracks Stone, and his X Factor performances of Wicked Game and Knockin’ On Heaven’s Door

Who? I’ve always referred to her as Australia’s Sanna, and that’s precisely why I’m dying to see Delta ooze her overwhelming goddess-ness in the Globen. She’s been a superstar since the early 2000s, playing Nina Tucker on Neighbours before carving out a piano-pop career for herself and winning more ARIAs (which are basically the Aussie Grammys, in case you didn’t know) than anyone could fit in a standard display cabinet. She’s currently a coach on The Voice Australia, and also sat in one of the red spinny chairs on The Voice Kids – on which Bella Paige finished second. We know My Girls, partly penned by Delta, went to Sofia with Bella, so the logical next step is for Delts to step up and demand to go to Sweden, right? If she did there what she does best – perch behind a piano looking stunning and belting out a heartfelt/powerful ballad – Down Under could be dangerous.

Who? In case you didn’t know, I’m a reality TV tragic – so, surprise surprise, here’s another X Factor winner who I think would be the business on the Eurovision stage. Samantha was mentored all the way into winning position on the show in 2012 by none other than Guy Sebastian (again, and who could also give her some valuable tips on winning over Europe) and she has reigned supreme as our premier pop princess (Kylie Minogue, in the World of Jaz, is the queen, not the princess…albeit a rather overrated queen *gasp*) ever since. I’m pretty convinced she attended the Ani Lorak Academy of Singing and Dancing Simultaneously and Excelling At Both Without Breaking A Single Bead of Sweat at some point, and she can put on a serious SHOW. Sam’s got power and playfulness, and that’s a great combo for an ESC audience to get from an artist.

Who? 20-year-old Troye is another muso who’s practically my next-door neighbour (meaning I could drive to his house without running out of petrol if I knew his exact address and was a complete creep) and he is SHRN to the max, having just dropped his first full-length album Blue Neighbourhood (which I think even Tanja would agree is amaziiiing). He sang and acted as a kid, but he’s best known for his Youtube videos, which have amassed him a tiny THREE MILLION subscribers to date. His sound is dreamy, electro, slick and unique, and I’d love to see someone so relevant and on fleek (I’m talking about a Youtuber…I had to use that terminology) yet so interesting represent Australia, in the wake of the pro-alternative Belgian and Latvian successes of 2015.

Who? I have to mention J.Maubz because it JUST MAKES SO MUCH SENSE. After her appearance in an alfoil dress on the Copenhagen stage, it might actually have made too much sense to send her to Vienna. But now that more time has passed, and another Eurovision has taken place since we last saw her attend one in any capacity, sending Jess would be a very sensible decision. Maybe this time she could wear a dress made out of baking paper (Croatia already did the bin bag thing four years ago, and plastic wrap probably isn’t suitable for family television)? Whatever it’s yay or nay to that idea, she’d be a top-notch ambassador for Australia on a global stage – and with a song that suits her vocal range better than Sea of Flags, she’d blow us all away.

Must-hear tracks This Ain’t Love, Can I Get A Moment?, Never Be The Same

And, with that cheeky mention of the Maubster, I’m done…for now. I’m constantly finding ideal reps for Australia – and plenty of other countries – popping into my head when I’m supposed to be concentrating on non-ESC stuff, so there might be a part deux coming to you in the near future. I can say for sure that I’m currently putting together a top 10 featuring ten (SAY WHAT?!?) random Aussie songs from the past and present that I’d love to have seen and heard on the Eurovision stage, if a) Australia had been allowed to participate pre-2015, and b) SBS made me their first port of call when looking for entry inspiration. So, if you enjoyed this post, you might like that one too *she hopes*.

I’ll be back next week with a Time-Warp Tuesday, but before that, I’d love you to donate a click to the poll below. Which of my five six picks for Australia to send to Stockholm do YOU think is the best fit for the job?

Now you’ve done that, it’d be plain wrong if you didn’t fill me in on your personal picks for Australia – or anywhere else, if that’s easier – to send to the contest in May. What are you waiting for, Christmas?

Fair enough…it is only a week away!