Australia’s Sanna Nielsen, and Eurovision. Delta Goodrem and the ESC. Deltz + Eurovij (I could go on, but thankfully, I won’t). According to a large portion of people who enjoy discussing Eurovision online – which I assume includes you, given your current reading material – that’s a match manufactured in the same factory where Il Volo were assembled (and very far away from the place where Chanee and N’evergreen were paired up *insert audio recording of fighting cats here*. And it seems that Australia’s second attempt at taking home the Eurovision-stamped Kosta Boda trophy could see the two meet, and make (hopefully) sweet music together.

That’s right, folks – do a little detective work, and you’ll find that Miss Goodrem is all freed up for May 2016. And that sudden space in Delta’s diary isn’t the only clue pointing towards the singer possibly succeeding Guy Sebastian as Australia’s ESC representative.

What’s that? You want proof? Fine then! Obviously my word alone isn’t enough for you, but I’m not offended or anything. Whatever.

Exhibit A: Delta’s disappearing role in Cats: The Musical

Sir Andrew Lloyd “Just Try And Top My Fifth Place For The UK!” Webber’s Cats began its Australian run in November, and as of a week ago, Delta Goodrem has been donning the hairy onesie required to play the role of Grizabella, glamour cat (?) turned not-so-glamour cat (???). Cats will travel across Australia into 2016 (presumably with several truckloads of kitty litter in tow), finishing up in my stomping ground of Perth in May – but according to the show’s ticketing website, it’s not necessarily taking Delta with it all the way.

Click through to buy tickets for the Adelaide (March-April) or Perth (April-May) performances, and you’ll see the following message: ‘It has not been confirmed who will be playing the role of Grizabella…and an announcement will be made in the near future.’ Interesting, isn’t it? Interpreting that statement in the obvious manner, it seems as though Delta’s commitment to Cats could end as soon as Valentine’s Day (when the Brisbane shows conclude), leaving the songstress with some serious free time through to the end of May. I wonder what would be a productive, international career-increasing use of that time?

Delta’s sinking her claws into the character of Grizabella right meow…but come February, that may not be the case (Photos: Cats Australia Cast page; Edwina Pickles)

Exhibit B: Coaching commitments on The Voice pose no problem

Guy Sebastian returned to his role of judge on The X Factor Australia shortly after arriving home from Vienna, and Delta – as a three, soon to be four-time coach on The Voice Australia – shouldn’t have a problem doing the same, if she were to duck into the Globen to do Eurovision next year.

That’s thanks to a sizeable gap in The Voice production schedule between the filming of the Blind Auditions, and the beginning of the live shows. Delta could potentially put the auditions behind her in time to walk the red carpet at Stockholm’s opening party, rehearse her Eurovision entry, qualify from her semi final (I’ve got confidence in this lady), win the whole contest (I don’t have that much confidence…but just humour me) and then jet back to Australia where her big red chair would be waiting for her. It’d be a busy start to 2016, but I reckon Delta could handle it.

Sony Australia is the record label of choice/contractual obligation for Guy Sebastian, and it was Sony’s German counterpart that partnered with the label and Australia’s ESC broadcaster SBS to pay for Guy’s participation in Austria. Sony, SBS and Eurovision are very much interlinked at this point in time – and guess which label Delta Goodrem is currently releasing music through? Some might say the logical nature of the path from Guy to Goodrem is too convenient, but I say it’s just convenient enough.

Then there’s the cherry on top of this mounting pile of proof: Delta’s Junior Eurovision association from November, which saw her name mentioned more than once (a lot more than once, in fact) in European media. Though her co-write of Bella Paige’s My Girls wasn’t intended to be a co-write for a Eurovision event, that’s exactly what eventuated – and to summon Delta for adult contest duty off the back of that makes sense…doesn’t it? 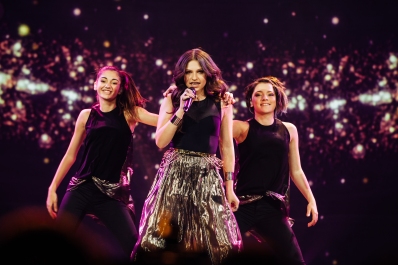 Now she’s co-written a JESC entry, is it Delta’s turn to take to the adult Eurovision stage with a song written by herself, for herself? (Photo: EBU, Elena Volotova/Vladimir Dudakliev)

With those points of evidence presented, I’ll assume you’re now as convinced as I am that Delta is the most likely Aussie act to be sent to Stockholm (and as I gushed in a recent post, I think she’d knock Europe’s lederhosen off given the chance). After all, she’s available, and already associated with the contest and with the label SBS turned to when selecting their so-far sole adult entrant.

But, if you’re still skeptical, consider the following: Delta’s latest single Wings was promoted in Europe, meaning she’s got a current presence on the continent, no matter how small, that can be built upon. She also has an album due for release in early 2016, which undoubtedly features some three-minute tracks that would do nicely as ESC entries. Then there’s SBS’ well-publicised intention of nabbing a ‘bigger name than Guy’ for participation no. 2. I’d say that Delta fits the bill (despite having the same amount of letters in her name as Guy Sebastian does, which technically makes their names equal in size. HA HA).

I guess the moral of this (news) story is this: Delta’s freedom to represent Australia at Eurovision 2016, and her likelihood of doing so, could be a) coincidental, or b) carefully orchestrated (bye-bye Grizabella, hallå Globe Arena) – so don’t discount her, whatever you do. At least not until SBS publishes an official media release stating that a family block of Vegemite chocolate will be flying the flag for us in Sweden.

Until that day comes, I want to know what you think. Is Delta deciding between the ‘Hair-Ruffling Breeze’ and ‘Destructive Tornado’ settings on the wind machine as I type this? If she is The One for the Land Down Under, would you vote for her (my fellow Aussies aside, of course)? Or is that a moot point, because you’re certain that the evidence above has nul points to do with Eurovision? Let me know below!

15 Responses to “NEWSFLASH: Free as a bird in May 2016, will Delta Goodrem spread her wings and fly north for Eurovision?”