When you see the choices some countries make with regards to their Eurovision representatives, it’s easy to think you could do a better job. When I say ‘you’, I really mean ‘I’ (I swear I could have gotten the UK a win sometime in the last few years) but I’m guessing you’ve done it at least once. If you live in a country that holds a national final and you get to vote on the winner, that’s something – but if you had absolute control, you could do better, right? Well, dream on. At this point, we can only pick our ideal artists or songs in our fantasies.

One of my main ESC-themed fantasies (apart from the one in which I am the next Anke Engelke) involves Australia being able to participate, but I’d never really thought in detail about who I would be proud to have represent us. That was until the team from eurovision.tv cornered the Aussie commentators in Baku and asked them who they thought would be the best act to come from Down Under to All The Way Up There if Australia was involved.

Ever since then, I’ve been making a list of the artists I think could do us proud, and FINALLY it’s reached a point of done-ness where I can publish it. It’s been a while coming, but with Australia Day on its way it seems fitting to introduce you guys to ten acts who, given the chance, could at least qualify to the final. I think…

FYI: The above video got a lot of people fired up because they thought Australia was actually going to be allowed to participate in Eurovision. So please keep in mind that this is totally hypothetical. We are not going to Malmö. Which is good for all the countries that are, since we’d totally beat you.

More info: Delta has been in the music biz for over a decade now, and is currently a coach on The Voice Australia. Her debut album went 15x platinum and remains one of the biggest sellers in Australian history. She co-writes all of her (usually) piano-based pop which has reached #1 numerous times, and she has won 10 ARIA Music Awards (our version of the Grammys). She has appeared on US television several times, including David Letterman’s Late Show.

The entry would be like: Shine by Sophia Nizharadze; Angel by Mika Newton

Listen to: Born To Try, Believe Again and Sitting On Top of the World. 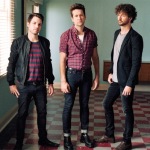 More info: I’m a bit biased when it comes to these guys, since they’re from my state. They are pretty good at what they do though. Joel, Kav and Stuart found mainstream success with their second album in 2004, and have since won 8 ARIAs, including one for Single of the Year in 2006 (Black Fingernails, Red Wine). Their 2009 hit Foreign Land incorporates traditional Turkish instruments and was written about the death of actor Heath Ledger.

The entry would be like: Deli by Mor ve Ötesi; Time by Izabo

Listen to: Foreign Land and Don’t Let Me Down

More info: It would be a very ethnic entry if Gurrumul represented Australia. The Indigenous singer and guitarist has been blind from birth, but despite that (and despite speaking little English) he has carved out a respected career for himself, writing and performing in the Aboriginal Yolngu language. He recently joined music royalty onstage at the Queen’s Diamond Jubilee concert.

The entry would be like: nothing Eurovision has ever seen before…

Listen to: Gurrumul History (I Was Born Blind) and Bapa

More info: Guy won the first series of Australian Idol in 2003, and has been by far the most successful winner in the show’s history, not counting his turn in the Eurovision-esque World Idol in 2004 (he finished 7th). He is the only male artist in the country to have had six #1 singles. Since 2010 he has been a judge on The X Factor, and has mentored the last two winners to victory. The lead single from his latest album marked his first appearance on the US charts, and also charted at #2 in Norway.

The entry would be like: Together We Are One by Eddie Butler; Angel In Disguise by Musiqq

More info: Belgian-born Gotye (real name Wouter de Backer) shot to worldwide fame in 2011 when his duet with Kimbra, Somebody That I Used To Know, took off and topped the charts in 26 countries. It was the biggest-selling single of 2012 in the US. Gotye had found fame in Australia before the STIUTK frenzy (he’s to us what Psy is to Korea) as a respected indie artist, notable for writing, producing and playing all of the original music on his records. He’s fluent in English and Dutch.

The entry would be like: I Hear Your Heart by Cosmos; Siren by Malcolm Lincoln

Listen to: Hearts A Mess and Somebody That I Used To Know

More info: Jessica was runner-up of the 2006 series of Australian Idol, and has since eclipsed the winner with her success (as those who come second often do). She has released singles with Flo Rida, Snoop Dogg and Ludacris, and supported Beyonce and Chris Brown on tour. Let Me Be Me, from her first studio album, was co-written by the UK’s 2009 ESC rep, Jade Ewen.

The entry would be like: Drip Drop by Safura; Čaroban by Nina

Listen to: Burn, Inescapable and Gotcha

More info: Samantha was the winner of The X Factor in 2012, having struggled after being discovered and then dropped from an American record label when she was a teenager. She was in the bottom two more often than any other contestant last year, but managed to push through and win the competition. Her performance of Kanye West’s Heartless topped the Australian iTunes charts. You’d be guaranteed a faultless live vocal from her.

The entry would be like: For Life by Isis Gee; Secret Combination by Kalomira

Listen to: Secret, What You’ve Done To Me and her version of Heartless

More info: Stan won the final series of Australian Idol at 18 years of age, with a voice beyond his years. His winning single Black Box charted at #2 in Australia and #1 in New Zealand. He started out as more of an R & B and soul artist than anything else, but has gravitated more towards the dance genre lately (like pretty much everyone else). You could expect a lot of pyrotechnics to be involved if he went to Eurovision.

The entry would be like: Euphoria by Loreen; Standing Still by Roman Lob

Listen to: Black Box and Loud

More info: Born Tim Omaji, this guy has been around the reality TV block, first appearing on So You Think You Can Dance and then placing 3rd in Australia’s Got Talent in 2010. Australia’s answer to Jason Derülo (as declared by me) he’s an all-singing, all-dancing showman, which also makes me think he’s Australia’s answer to Donny Montell (only with attitude). He’s just released his first full studio album and recently performed for a global television audience at the 2012 Miss Universe pageant.

The entry would be like: Allez Ola Olé by Jessy Matador; La La Love by Ivi Adamou

Listen to: Set It Off and Incredible

More info: Twins Jess and Lisa Origliasso have been writing and performing pop-rock, dance-pop, electro-pop and any other kind of pop fusion you can imagine since the late 1990s. Their debut single 4Ever charted in nine countries, but their most successful song was 2007’s Untouched, which hit #1 in Ireland and the top 5 in Canada and the Netherlands. Twins have had mixed fortunes in the ESC, but I think the audience would appreciate a pair who don’t jump around like their underpants are on fire ALL. THE. TIME.

The entry would be like: DJ Take Me Away by Deep Zone & Balthazar; Et Cetera by Sinead Mulvey & Black Daisy

Listen to: 4Ever, Untouched and Lolita

I hope this wasn’t boring for anyone. It’s just that, as much as I love talking about Europop etc all the time (which definitely bores my friends and family) sometimes I really want to ramble on about stuff closer to home, albeit in a Eurovisiony sort of way.

Which of these acts do you think would best represent Australia? And which artist would you choose to represent your country if you had the power?