It’s February, and that means national final season is about to shift into overdrive. THAT means those of us in unfortunate timezones will be having many late nights/early mornings in the weeks to come, while others tune into Dansk MGP or A Dal or *insert NF of choice here* over their cereal bowls. Then there’s those lucky people who get to experience NF season at a totally respectable prime-time, post-dinner slot on TV. I hate those people.

No matter the situation or dress code (2am in mismatched pajamas WOOHOO!) there are fun times ahead, and the funnest (yes, I am aware that’s not a word) time of all, in my inarguably correct opinion, is coming up this Saturday, live from Sweden. Well, more specifically, Göteborg, Sweden.

Yes, that’s right…Melodifestivalen is (almost) upon us again! Having graduated uni (for the second and final time) on the weekend, with the aftermath being a frighteningly unknowable future, Melfest is the bright spot on my horizon at the moment. I cannot wait to watch Her Royal Amazingness Sanna Nielsen and That Guy Who’s Her Co-Host commandeer the festivities. During the first semi final, said festivities will include the comeback of a Mr. Eric Saade, who’s confident he can Sting his competition into submission and represent Sweden in Eurovision once again.

The show is going to be epic, no doubt, and I thought I’d ring it in by revisiting last year’s also-fabulous edition. This post is a timely one, but it doubles as good filler as we wait until we can do a top 10 ranking of the Eurovision 2015 entries (the thought of doing a top 9 irritates me). It’s one of my famed (AHAHAHAHAHAHAHA) Retro Rankings, but rather than using a past Eurovision as the basis, I’m taking Melodifestivalen 2014 and turning it into a personal top 32. Whether you’ve forgotten what last year’s comp had to offer or you’re listening to the album right now and are 110% ready to fight me if I don’t have Ace Wilder on top (which I don’t, sorrynotsorry) I hope you enjoy the following. Give me your top 32, top 10 or just your favourites of Melfest ’14 in the comments. Please?

Before we begin, a brief, alphabetised recap of the comp:

#1 | Hela Natten by Josef Johansson – I fell in love with this on the first listen, and I pretty much haven’t stopped listening to it since. It didn’t even get to Andra Chansen, but the soaring, stadium-anthem quality and weighty lyrics make for a winner by Jaz standards. I’ve also become über-attached to Josef himself over the past twelve months, as he’s proved to be a very versatile artist. Check out his post-Melfest singles Blickar Kan Mörda and Tysta Leken (a cover version that I think outdoes the original) for proof. 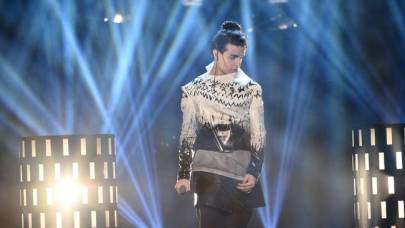 #2 | Undo by Sanna Nielsen – Obviously. There will never be a more golden moment for me than Sanna’s marginal win in last year’s comp, after six previous attempts. I’ve always been of the opinion that Undo is her best Melfest entry, and its success at Eurovision is something of a testament to that. Her voice is both pure and powerful, giving the ballad an air of vulnerability and defiance at the same time. I sing it in the car, the shower, the toile-er, I mean, the kitchen…everywhere, basically. Sanna gave me a sad that I actually don’t want to undo.

#3 | Bedroom by Alvaro Estrella – Man, Sweden let some gems slip through their texting-and-dialling fingers in 2014! In an NF of such high quality though, it’s virtually impossible to send every great song to the final. Some would argue that Bedroom is hardly one of those greats, but filthy lyrics and all, I absolutely LOVE it. So what if you wouldn’t want it as your wedding song for fear of offending your great aunt Mildred (and for many other reasons)? It’s an irresistible slice of dance-pop in the vein of Moves Like Jagger, and I reckon it could easily fill any floor with drunk, shoeless guests. You know, if that’s what you were after. 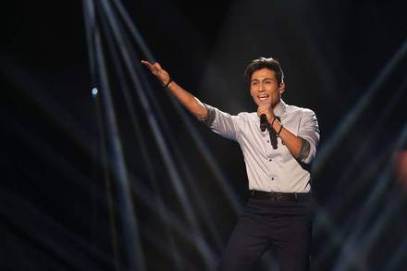 ‘I should warn you, my actual bedroom doesn’t have strobe lights…’

#4 | Echo by Outtrigger – For the second time, Melfest made me love screamy rock, which is something I detest as a rule. Dead By April’s Mystery was my musical crush of 2012, and Echo became its 2014 counterpart. I don’t know exactly why I like this so much, but a lot of the appeal lies in the chorus that was made for headbanging. This can be awkward when you’re hearing the song in the middle of a supermarket as opposed to a mosh pit, but rock music ain’t about avoiding strange looks in public.

#5 | Busy Doin’ Nothin’ by Ace Wilder – I’ll admit, this would have been the more cutting-edge, daring choice for Sweden to send to Copenhagen. Vocally, it would have been less impressive than Undo, but when a song’s this catchy, I for one am too busy fist-pumping and trying not to fall to my death as I dance atop the nearest piece of furniture to pay much attention to the performer’s vocal chops. 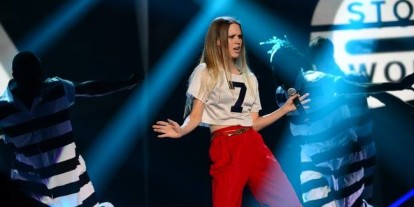 #6 | Around The World by Dr. Alban & Jessica Folcker
#7 | Survivor by Helena Paparizou
#8 | Red by EKO – If the idea of a lite, 80s synth version of Margaret Berger’s I Feed You My Love is up your alley, then you probably enjoyed this as much as I did. EKO won their way into Melfest via the pre-NF contest for new talent, and while they continued the tradition of those winners failing to qualify from their semi final, they found a fan in me with Red.

#9 | Efter Solsken by Panetoz
#10 | Yes We Can by Oscar Zia – Once upon a time I was obsessed with High School Musical, and as this song has ‘Disney Original Movie soundtrack’ written all over it, I can’t help giving it the thumbs up. Less Disney is the scandalous mention of dancing in underwear and letting the people stare, which sounds a bit like a strip club-type situation. But that’s not a bad thing, since it stops things from getting too sickly sweet.

#11 | Love Trigger by J.E.M
#12 | Natural by Anton Ewald
#13 | Bröder by Linus Svenning – Linus is back this year and singing in English, but I doubt his song will carry as much meaning and emotion as Bröder, which gets me right in the feels every time. As Yoda would most likely say if he were a Melfest fan, lovely song this is.

#14 | Hollow by Janet Leon
#15 | Aleo by Mahan Moin
#16 | Blame It On The Disco by Alcazar – Yes, it was Stay The Night with a different title, but that song did fairly well for them in Melfest, and this one did even better. I guess it’s true that if something isn’t broken, don’t bother to fix it. Here we have classic Alcazar, i.e. cheesy disco-pop with an obligatory key change (or five hundred) and it’s one heck of a guilty pleasure.

The Alcazar motto: peace, love, and a s%#tload of sequins.

#17 | När Änglarna Går Hem by Martin Stenmarck
#18 | Ta Mig by Linda Bengtzing
#19 | Set Yourself Free by Little Great Things
#20 | All We Are by State of Drama – This band brought the standard of the 2013 comp up a little with Falling, but in a stronger year with a weaker song, they couldn’t come back with a bang. All We Are is competent, but pretty bland.

#21 | Burning Alive by Shirley Clamp
#22 | I Am Somebody by Pink Pistols
#23 | Glow by Manda
#24 | Casanova by Elisa Lindström – I really disliked this the first time I heard it, and I’m not about to gush over it now. However, I will compliment how happy, cute and energetic it is. It’s like a quokka in song form.

Any excuse to use a picture of a quokka will do, so here’s one I prepared earlier.

#25 | To The End by YOHIO
#26 | Fight Me If You Dare by IDA
#27 | Songbird by Ellen Benediktson – This is not my preferred style of music at all, and apparently it wasn’t Ellen’s either since she’s returning with something different and more ‘her’. For me, this is a case of knowing the song is well-written and generally good, but not being able to connect with it.

#28 | En Enkel Sång by CajsaStina Åkerström
#29 | Raise Your Hands by Ammotrack
#30 | En Himmelsk Sång by Ellinore Holmer
#31 | Bygdens Son by Sylvester Schlegel
#32 | Hallelujah by The Refreshments – Can somebody please explain to me Sweden’s preoccupation with rockabilly? Perhaps it’s just SVT’s quest for variety, but every year a track like this sneaks into the lineup and leaves me scratching my head, and more often than not, hitting the Mute button.

Well, that’s that, and now I’ve shown you mine, you’re welcome to show me yours! If you’re up for it, also let me know who you’ll be cheering for in Melodifestivalen’s first semi on Saturday night. I’m Team Saade with a little Behrang Miri on the side, but who knows which artists will produce gems that I’ll be fawning over in a year.