Every year, during national final months, there’s one Saturday night that can only be described as crazy, for all the action it brings. Although come to think of it, the “official” description is Super Saturday, so…I guess you can say whatever you want about it. It’s an evening where there are so many semis and finals and whatnots going on that you have little hope of keeping up with it all even if you decide to stay in and not go out to a club and dance on a table into the wee small hours whilst slurring the lyrics to Ghetto Superstar and waving your underpants in the air (I don’t write from experience, I swear).

Well I’m here to tell that today is…

…not that Saturday. Sorry if I got your hopes up. Nonetheless, there are some big things happening tonight, including the selection of Baku’s next entry in Malta, and the first installment of my favourite national final in Sweden. Let’s get to the nitty gritty (INSERT APPLAUSE HERE for my use of the term ‘nitty gritty’) of this not-so-super-but-still-pretty-cool Saturday’s scheduled events.

The Maltese Falcon…er, I mean Final

Last night Malta had a semi final, but I won’t go into detail about that. The important thing is that we check out the final, because one of its 16 songs will be failing to qualify in Azerbaijan in a few months time.

Okay, that was mean of me. But I’m often so unimpressed by Malta’s finalists, and 2012 has been no exception. I feel like the island is stuck in a musical time warp when it comes to Eurovision. Let’s face it; Glen Vella was not the most current of acts. There are some good ones in this year’s group though, and I am pleased to say that my entire personal top 5 advanced from the semi.

My picks: Look At Me Now, I Will Fight For You (Papa’s Song), Answer With Your Eyes, No Way Back and 7 Days.

Look At Me Now is a Nickelback-esque rock track with two main things going for it (besides me) – firstly, it’s very Top 40, which as we now know could allow it to win Eurovision (if it came from somewhere other than Malta) and secondly, it works great live, thanks in no small part to Mr. Edwards. Rock on!

Fabrizio Faniello is back for the 178th time, probably wanting to make up for his dreadful and totally uncalled for result the last time he made it all the way to the big show in 2006. I Will Fight For You is tons better than his last NF entry, and I’d tentatively say it’s my favourite of what’s on offer. It sounds like a mash-up of See You Again by Miley Cyrus, Where Do You Go? by No Mercy and Temple of Love by B.W.O., but I’m partial to all of those songs (yes, even the Miley one) and if this is as close as we ever get to a megamix at Eurovision I’ll be happy.

Amber, Klinsmann and Danica also have decent if not amazing songs of varying genres. I’m hoping, but not expecting, one of them, Richard, or Fabrizio to win. Which brings me to…

My prediction: The reason I’m not expecting a win from my favourites is because my favourites have a knack of never winning. Still, I’m going to say Richard or Fabrizio could do it. Otherwise it’ll be Kurt Calleja, Wayne Micallef or Deborah C.*

* Anyone I predict to win also seems to coincidentally NEVER win, so keep that in mind.

Norway have a good final on their hands so far (which could be made excellent if they give Rikke Normann and Shapeshifter the wildcard place) and I hope the three qualifiers tonight keep the standard high. It’s not the best semi of NMGP this year, so that might not be as easy as it sounds.

Tooji has been snubbed for being a clone of Eric Saade, but I have a few things to say about that:

A) There’s no way he’s looking in the mirror every morning and thinking ‘My God, do I look like Eric Saade or what!’

B) The song does not have a (practically) single-word chorus.

C) Where can I get a clone of Eric Saade? Do they have those on eBay? 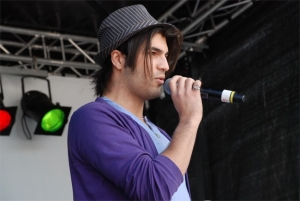 Marthe Valle’s Si is a nice ballad, but it’ll have a hard time outshining Nora Foss Al-Jabri’s song should it make the final. Sailors is quirky electro-pop that could be very interesting live so long as nobody gets seasick onstage. I’m also thinking Lise should borrow Soluna Samay’s costume.

My prediction: If I was a betting woman, I’d put money on Stay, The Greatest Day and Euphoria to make the final.*

* The reason I’m not a betting woman is because I am usually wrong, as indicated by the previous asterisk.

FINALLY! Europe’s most-loved NF is beginning, and I’m so excited I just made an assumption about an entire continent! Melodifestivalen is almost as big a deal as the ESC itself, with 4 heats, a second-chance round and a final to its name, not to mention the Webjoker process that comes before everything else. The standard is often as high as Dana International’s hemlines, and Sweden’s biggest acts aren’t afraid to take part. On the list for 2012 are Ulrik Munther, Timoteij, Danny Saucedo, Charlotte Perrelli and Molly Sandén, to name a few…none of whom are in this first heat. Here’s who and what is (listen to the full songs here: www.svt.se/melodifestivalen)

Sean Den Förste Banan is a song I feel like I shouldn’t like – I mean, his name is in the title, for Petr Elfimov’s sake (rarely the sign of a high-quality song). But it’s so unbelievably catchy I can’t help myself.

Mystery, on the other hand, is a song I didn’t expect to like. The bits that don’t involve ‘death growl’ are actually really nice, and I can even see myself accepting the death growl in the future. The chorus is a knockout. Dead By April, I think you’re a dead cert for the final.

Dead By April: they were never going to sing a song about ponies and rainbows.

Salt & Pepper is familiar retro pop, and Euphoria is familiar dance pop, but there’s nothing wrong with familiarity! I am a little disappointed with Loreen who was one of my favourites last year, but I knew I would be – nothing could live up to her 2011 entry. What she’s got now in 2012 is pretty darn good.

My prediction: This post has been rather long, so I’ll give you a guess in one sentence: Mystery and Euphoria to the final and I Want To Be Chris Isaak (This Is Just The Beginning) and Salt & Pepper to Andra Chansen.

I can’t wait to wake up tomorrow and see what happened in Malta, Norway and Sweden– follow me on Twitter (@EurovisionByJaz) for reactions.

And don’t forget to keep dropping by as the selection season continues!