Välkommen to another Saturday night on the ESC NF calendar! It’s February 1st, and that means we’re edging ever closer to needing at least six screens and six clones of ourselves to keep up with all the selection shows in action across Europe (and down here in Australia, in next Saturday’s case). Thankfully, the universo – Blas pun intended – is easing us into things with a weekend that has just enough going on to get excited about, without it being a stressfest. Let’s take a look at the where and what for the next few nights.

If you’re after the viewing links for anything/everything, check out the comprehensive events schedule on ESC Xtra. I know where my loyalties lie and will obviously be glued to Melfest, but let me know what you’ll be watching in the comments.

As usual now NF season is really getting into gear, I’ll be running through a select few selections each Saturday. I’m only human and can’t discuss it all without having a mental breakdown, and you don’t want that, do you? DO YOU?!? See, it’s starting already. That’s why I get choosy.

On that note, today I’m all about Sweden and the Czech Republic – but first, let’s take a walk through what we know about Eurovision 2020 so far in terms of the entries. It’s a very short walk…

Where are all the (Rotter)damn songs?

It is indeed February now, and we have a grand total of two set-in-stone songs for Eurovision this year: Albania’s Shaj (not totally set in stone if you count the inevitable revamp) and Spain’s Universo, released earlier this week. If you’re as desperate as I am for more, then you can also cling on to the song titles from Austria and Georgia: Alive and Take Me As I Am. As we all know though, February is famous for Super Saturdays that leave us drowning in song selections. The flood is coming, guys, so get your goggles on!

I’m not going to go too deep into how I feel about the two tracks we’ve got at the moment – I have to save something for my rambling reviews come April – but I will say that my favourite is Universo, and not (just) because Blas is a hot Spanish tamale and I’m very shallow. It’s a slick production all the way down to the visually confusing/beautiful music video, and it has a powerful atmosphere that makes me think epic staging possibilities are endless. That hasn’t been the common reaction among Eurofans (at least not on Twitter, the most judgmental place in all the land) but all I want to say is please wait and see what happens in May. Everyone deserves the benefit of the doubt, and Spain’s spectacular JESC comeback in 2019 proved they can pull off perfection. Who knows what Blas and his team are cooking up behind the scenes for us to feast our eyes on in Rotterdam. If I can make a suggestion, Mr. Cantó, maybe consider a stage costume that’s shirtless? Body glitter optional.

Let’s get this show on the road! Melfest takes Linköping

Like I said in my last post, I am capital E Excited for Melodifestivalen, while also in disbelief that it’s come around again already. Tonight’s first heat is happening in Linköping and the lineup includes one former winner, two debutants, three returnees, and John Lundvik’s kick-butt backing singers (who are down to a trio and technically making a comeback too). Here’s the full list for those of you requiring a refresher:

Having listened to the snippets a few times over, I have to admit, I’m a little underwhelmed. And I wanted to be 110% WHELMED, SVT! But if this means the way is being paved for certain other acts in later semis (*cough* Hanna Ferm *cough*) to really impress, I’m okay with it. Plus, I should take my own advice and see how the full songs come across on stage before I get too disappointed. Let me know in the comments if you’re wondering where the potential winners are too, or if you think I’m crazy and this is a fantastisk Melfest heat. 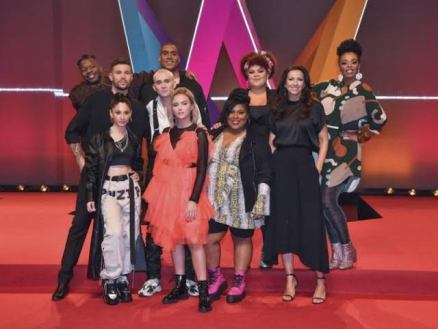 At least they all impressed in the fashion department (Photo: SVT)

My favourite four Moves, Ballerina, Sluta Aldrig Gå + Boys With Emotions. Suzi P is bringing the Mina Bränder of 2020 to the table and it works wonders for me – I always think Swedish sounds extra cool in an urban context, and there’s lots of attitude in this song (but I don’t expect it to get anywhere, á la Adrijana’s Amare). Malou has changed up her sound from the adorable I Do Me, and while I don’t get the same enjoyment out of Ballerina, I’m glad it’s something that shows growth. Sonja isn’t competing with a song you’d call contemporary, but it is so her style, and because I liked För Att Du Finns and I Din Himmel so much I was guaranteed to like this. Finally, there’s Felix, who isn’t sticking out to me as a likely winner based on the song alone, but Boys With Emotions needs to be completely packaged up for us to appreciate it, I think. I’m keen to see him perform tonight.

My prediction Boys With Emotions and Ballerina to go DTF; Move and Take A Chance to go to Andra Chansen. Sluta Aldrig Gå 5th, Moves in 6th and Inga Problem in last place.

What do you think will go down in this first Melfest semi? Make a prediction in the comments – I dare you.

OMG, ESCZ! My thoughts on the Czech songs before seven become one

After two years of generally being amazing at Eurovision (excluding Lake Malawi’s ridiculously low televote score) the Czech Republic has unsurprisingly decided to stick with their successful recipe of putting a bunch of songs to an online vote. In 2020, it’s a seven-strong group that includes a few familiar faces.

Eurofans have been going crazy over this lineup, but I wasn’t convinced until I actually had time to listen to all of the songs in full (which was yesterday). I still don’t think every song is incredible, but there is plenty to like here – and plenty of potential for another solid ESC result. That’s all you can ask for at this stage.

My favourites Kemama, Dark Water and All The Blood. Benny’s song is hardly something you’d expect to hear from the Czech Republic, but that’s part of its charm. It’s urban, catchy and danceable, which ticks a fair share of boxes on my list. Olga is bringing a pretty traditional power ballad to the party, but it’s much more modern and appealing than the likes of Moldova’s Stay. It has a touch of drama and an otherworldly feel that I like a lot. Then there’s We All Poop, who I really wish weren’t calling themselves that – because their song is not the novelty troll track a band name like that suggests. All The Blood deserves an act with a name that won’t distract from how good it is. Even WAP would work! I guess they are right though…we do all poop.

My prediction I think Dark Water, Get Up or All The Blood would be the best for Eurovision, but Kemama would be a cool addition as well. White and Black Holes is lovely, but too aimless. Wanna Be Like is irritating IMO. At Least We’ve Tried is overly inoffensive. When all is said and done, I reckon we might be hearing 40+ commentators say ‘Up next is We All Poop!’ in May. It’d be a blessing and a curse. But hey, at least the song’s good.

Well, that’s all I have to say about NFs for now. I better go set my alarm for 3am, which is rough but always worth it for Melfest! Before you go, don’t forget to tell me what you’re tuning into tonight, what you’re hoping will happen results-wise and what you think WILL happen. Sadly those are often quite different things, but as Eurofans we get used to it.