Yes, it’s that time again – when, in the wake of Eurovision and in the midst of PED, a heap of ESC-themed sites feel compelled to hand out some trophies of their own. They may not be fancy, microphone-shaped Kosta Boda glass, but they give every country, artist, backing singer and man with horse mask on the chance of taking one home.

In the immortal words of Martina Bárta, now it’s my turn. The EBJ Eurovision Excellence Awards, as they’ve been branded the past few years, are back! But before I give out any awards personally, I need you guys – yes, YOU (I love that shirt, by the way…it’s totally your colour) – to decide on some winners for me. That’s not because I’m too lazy to choose them myself, but because I love having input from anyone who takes the time to read this blog, and I definitely want to know what you thought were some of the highlights and lowlights of Kyiv 2017. So here we are.

This year, there’s not one…not two…not three…*ten minutes later* but TWELVE People’s Choice Awards up for grabs. I’ve tried to keep the nominees as numerous as possible, but if I haven’t listed someone/something that you REALLY want to vote for, leave me a comment and I will count it as a valid vote. The rules? Well, you can only vote once (on any one device, so feel free to hijack all of the phones/computers/tablets in your household) but you can make multiple choices on each poll – so if you’re struggling to decide, for instance, whether Oleks, Vova or Timur was the best host, just vote for all three.

Who says I’m not generous?

You’ve got one week to vote (and to spread the word so all of your Eurofan friends get to have their say too). Now go forth and pick your personal winners! 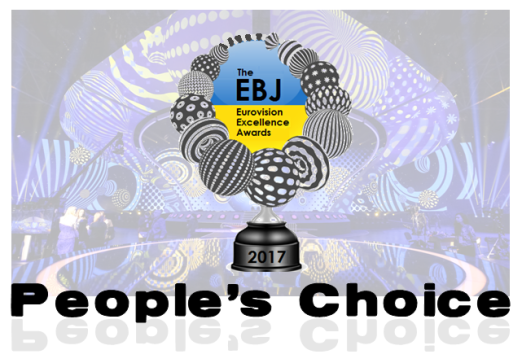 She’s friendly, she’s fun, and she’s the female singer of 2017 you’d choose to hang out with above all others. It’s about personality rather than looks for this award (although all of these ladies are beautiful on the outside AND the inside).

Now it’s time to pick the most personable male artist who charmed both fans and the media in Kyiv. You’d take a road trip with him without hesitation, because you’d be guaranteed a great time and a lot of laughs.

Teen Act of the Year

Years and years of experience can come in handy when handling Eurovision…but teenagers can do pretty well for themselves too. All of 2017’s teen acts finished in the top 10, but which one was your favourite?

Dancefloor Filler of the Year

Whether you were in the Euroclub, at a Eurovision party or home alone in your pajamas, there had to be at least one song this year that you could NOT resist dancing to – and you’ll be playing it again any time you need to add some life to a future party!

We don’t get preview videos from every single country competing in the contest (this is the one area where Sweden shows weakness) but the bunch we do get often bring their A-game. 2017 was no exception – let’s see which video you think is the best of the best.

Check out all of the nominees here.

The Eurovision stage sees more stand-out props and gimmicks than any other, and they (usually) add something special to a performance. Vote for the little – or large – extra something that impressed you the most this year.

Best Use of the Backdrop

The sky is the limit these days when it comes to pimping performances via high-def screenage. It’s a missed opportunity if the background isn’t used to a country’s advantage, but there weren’t many missed opportunities in Kyiv! Which backdrop wowed you when you laid eyes on it?

Best Performance From the Big 5

There are always musical hits and misses from France, Germany, Italy, Spain and the UK – but this award is for the country that stood out on stage when compared to their fellow automatic finalists (the hosts not included).

The Host With The Most

It’s a hard job, choosing between three attractive Ukrainian men – but somebody has to do it! Oleks, Vova and Timur took the reins between them this year, but only one can be crowned the Host With The Most. Take your pick.

Opening/Interval Act of the Year

We were spoiled this year when it came to pre and in-between song entertainment, with Ukraine trotting out a bunch of its biggest stars – including ESC 2016 winner Jamala three times (fine by me). Without comparing anything to Love Love Peace Peace, decide on your no. 1 performance.

Check out all of the nominees here.

OMG Moment of the Year

There were many jaw-on-the-floor occurrences this year, including the moment rehearsal viewers spotted a questionable (a.k.a. penis-like) image front and centre on one of Latvia’s screens (which had to be covered up). Which one had you shaking your head in disbelief?

The ‘How Did THAT Happen?’ Award for Most Shocking Result

Speaking of shocking…even the most talented predictor wouldn’t have seen some of the Eurovision 2017 scoreboard placements coming. Some countries defied expectations while others failed when we thought they’d flourish. Choose your personal WTF result below!

Congrats, your work here is done. Thanks for taking the time to vote…and if you didn’t but you’re still reading this, then GET BACK UP THERE AND DO YOUR DUTY!

Drop by EBJ next week for the full results of the People’s Choice Awards – and find out who won all of the other trophies in the categories of The Artists, The Songs, The Performances, The Show and The Results. Things may kick off a little sooner, so if you want to know exactly when, be sure to subscribe in the sidebar, or follow me on Twitter/Instagram.

Until then, stay fabulous!