Greetings, guys. As promised – and as you know, 94.6% of the time I keep my promises – it’s time for the preliminary stage of the 2016 EBJ Eurovision Excellence Awards, a.k.a. the People’s Choice polls!

In case that sentence meant nothing to you, allow me to explain: every year, like basically every Eurovision blogger in existence, I hold an online awards ceremony on par with the Oscars to commend the best (and best of the worst) of all things related to the contest just passed (if you’re bored or actually happen to have the will, as unlikely as that is, you can relive the glitz and glamour of last year’s EBJEEs here and here). And because I’m all about sharing the love and letting/forcing you to have your say, I always like to make some of my trophies awardable by people other than myself. So, if you have opinions about Eurovision 2016 and you like to vote on serious matters such as who had the coolest prop at this year’s comp, you’ll enjoy this post.

Based on the feedback from the 2015 People’s Choice vote, there are more nominees in more categories this time – plus, you can vote for multiple nominees instead of choosing just one. Don’t say I’m not Miss Generosity (not a People’s Choice Award, sadly). So limber up those fingers and prepare to make THE MOST IMPORTANT DECISIONS OF YOUR LIFE. No pressure. 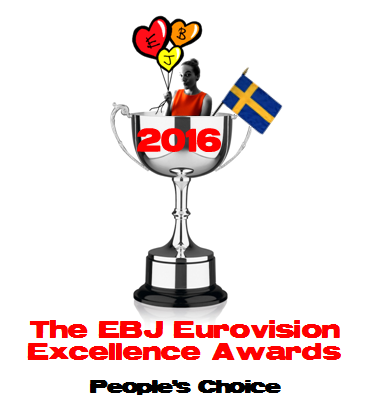 The ‘he’ you’d never pass up an opportunity to hang out with – thanks to the Euroclub shuttle bus-loads of charm, presence and personality he displayed in Stockholm.

The ‘she’ you’d choose to be your ESC BFF – i.e. the most personable, likeable lady act available.

Teen Act of the Year

This one’s pretty self-explanatory. Which under-20 artist kept your boat most afloat and proved to be the most talented teenager in this year’s line-up?

Not all of these songs were favourites with the bookies, but they were certainly favourites with the fans – in the lead-up to the contest, on social media and (trust me on this one) in the Euroclub. But which one was the most fanwanky of them all? You decide.

Dancefloor Filler of the Year

You’ll play this song at your wedding when time’s getting on, and your guests are losing the will to woki their popos. Press play and the problem’s solved!

Some were flashy, some were quirky and some were super-duper stylish…but which one is your number one? If you need a memory refresher, check out this playlist I prepared earlier.

They all sang their hearts out, but vote for the guy who gave you goosebumps with his vocal prowess – or just made you think ‘DAYUM, this dude can sing.’

Ditto – only this one’s about girl (vocal) power.

There were only a handful of twos, threes and mores participating in 2016, so it shouldn’t be hard for you to decide which of those acts hit their harmonies just right.

Most countries add a little extra spice to their performance via something their artists do, sit on, stand on, dance around, trip over etc. Give props (HA HA) to the prop or gimmick you saw as superior in Stockholm!

All-Rounder of the Year

Vocals, costumes, choreography; backdrops, song and stage presence – every element matters in a Eurovision entry. Who had the most perfectly-packaged performance that ticked all boxes this year?

The Host With The Most

This is a straight-up, head-to-head, battle-of-the-sexes duel. Petranators and Månsters, pledge your allegiance and help your favourite host take this trophy home.

Jaw-Dropping Moment of the Year

There were OMGs aplenty before and during this year’s comp. If your jaw hit the floor when any of these occurred, this poll wants to know about it.

PS – If you’re not sure about the Moldovan moment, be aware that Lidia’s astronaut *may* have forgotten to remove his delegation accreditation for televised semi final purposes. Oops.

Opening/Interval Act of the Year

For once, the pre and mid-show entertainment at Eurovision was more than multiple annoying interludes interrupting the contest’s exciting parts. From MZW’s reprise with a difference to a US superstar dropping by, there was something for everybody on show. So, which offering gets the biggest high five from you?

Most Improved (From NF to ESC)

Some delegations work tirelessly to reshape and ramp up their song and/or performance, between winning domestically and stepping onto the Eurovision stage. Vote for the act that made the most impressive transition during that time, in your opinion!

And (assuming you took the time to vote in all of those polls) your work here is done! Tack så mycket for your input, and stay tuned to find out if your favourites will be winners that take it all. The EBJEEs, feat. the People’s Choice Awards and plenty of others, are almost here, so hurry up and hire those tuxedoes/show-stopping ball gowns. You know, so you can sit at home in them staring at a screen when I do post the “ceremonies”. Fun!

4 Responses to “VOTE FOR THE WINNERS: The EBJ Awards for Eurovision Excellence (People’s Choice) polls are now open!”