Good evening, ladies and gentlemen. Even if it’s nine o’ clock in the morning where you are, just go with the flow, because this is a special occasion.

Yes, oui, and si – the 2015 EBJEES are here! It’s about time, seeing as Eurovision took place over a month ago and the DVD isn’t far from being released (the official indicator that I’ve taken way too long to get these awards going). Today’s ceremony is the first of two, so try not to crease your formalwear. And please pace yourselves with the champagne.

My final command? Take your seats, because the awards in the categories of The Artists and The Songs are about to be handed out. The results of four People’s Choice Awards will also be revealed, so sit back, relax, and see if your favourites came out on top. Oh, and please excuse the messy formatting at times (technology is not my friend today). 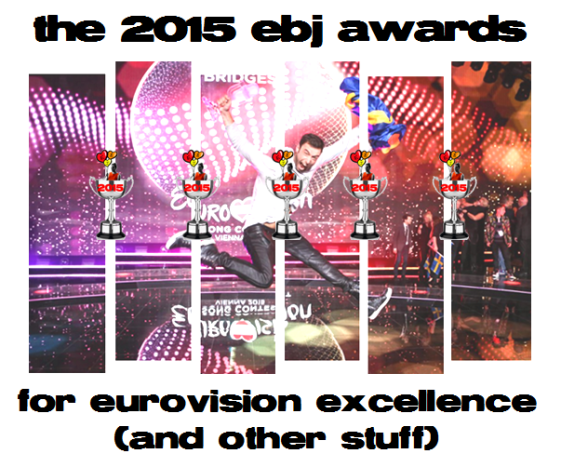 Okay…so I’m biased. But I find it hard to believe that anyone of any sexual persuasion could look at the shots below and not be affected by the muscular physique, penetrating gaze and strangely alluring meadow of chest hair belonging to our reigning Eurovision champion. Can you buy a flat-pack Måns at IKEA? If not, why not, Sweden? Get on it, and make sure you include the leather pants.

For the second year in a row, Spain takes the Hottest She trophy home. I don’t know if there’s something in the water over there or if it’s just a coincidence, but either way, Edurne is my número uno girl crush of this year’s contest. I guess it’s not just gentlemen who prefer blondes, on this occasion. 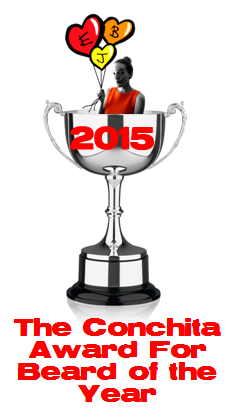 Each year, I award a gong in honour of the previous year’s winner (so expect one for 2016 in the form of The Butt-Hugger Award For Best-Fitting Trousers). In light of that, how could I bypass a beard-themed award this year? Gianluca’s carefully cultivated stubble wasn’t quite as perfect as Miss Wurst’s, but it upped his sex appeal by a factor of five hundred. Plus, it made him look older than his twenty years, meaning I didn’t feel like such a cougar thinking he was a tasty morsel. 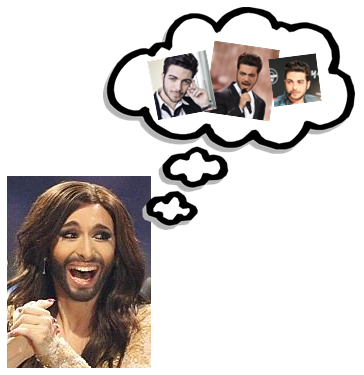 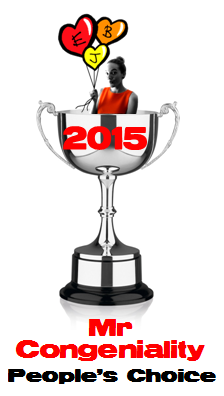 The people have spoken – and by ‘the people’, I mean you guys, and me, because of course I snuck in a cheeky vote of my own. The first of eight People’s Choice Awards goes to Guy Sebastian, which doesn’t shock me even though I *may* not have voted for him (#teammånsineveryrespectalways). Guy didn’t put a foot wrong with the press from the moment he set foot on Viennese soil, in turn endearing himself to all of us watching interviews and press conferences from home. Even pre-ESC, he was flashing that megawatt smile and working his easy charm at Eurovision In Concert and the like. Way to maintain the Aussie rep of friendliness and approachability, Guy!

When it comes to the lady of 2015 you guys would want to hang out with, the reasonably clear choice was Marta – and it’s obvious why! Václav’s partner in crime isn’t suffering from a shortage of personality, whether she’s onstage whipping her heels off or offstage joking and laughing with anyone who crosses her path. If she ever posts a personal ad looking for a new best friend, I’ll respond to it for sure. Me and a million others. 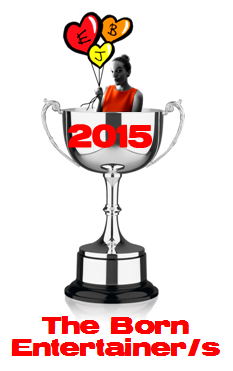 You might have been expecting me to hand this one to a more seasoned professional. But, at sixteen years old and without the stage experience of most of the other nominees, Nadav can command a stage and pump up a crowd with ease. I’ve got to concede that he’s a natural; that he was born to be on the stage. It’s just a matter of whether that birth took place in 1998 as alleged, or 1988, which seems like the more realistic option. 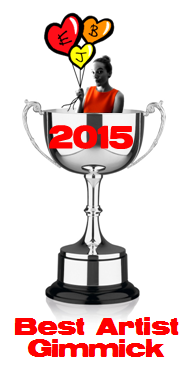 Australia, competing legitimately in Eurovision? Puh-lease. At least that’s what was thought when the EBU announced it was happening and we all assumed it was a prank. But it wasn’t, and it did happen, with Guy Sebastian at the helm. What better talking point to have associated with an act? Side note: Aussies were threefold on the Stadthalle stage (not counting Guy’s backing group members): think Mary-Jean O’Doherty lending her operatics to Armenia with Genealogy, Katrina Noorbergen songwriting and backup-singing for Russia, and Guy. Obviously. 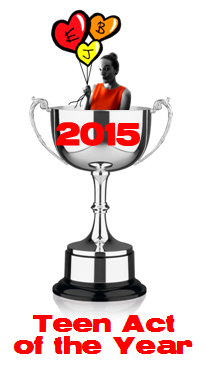 Not only was he the highest-scoring teenager of them all this year, but Loïc proved himself to be perhaps the most talented one too – co-writing Rhythm Inside and choreographing the accompanying stage show in his capacity as dancer as well as singer. The guy (man? Boy? Kid?) is too cool for school, and one to watch as he continues to build his career. 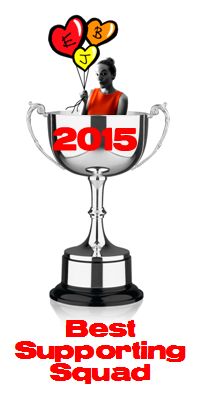 It’s easy to give the main artist all the credit for pulling off a great performance. But the vocal support and energy backup singers and/or dancers provide rounds out a performance, and is often invaluable. I’m sure Loïc was grateful for his five double-threats who, dressed all in white, both contrasted with and complemented him as the main artist. They even took over when things got overwhelming and he had to have a mid-song nap on the floor. That’s a top-notch support system right there. 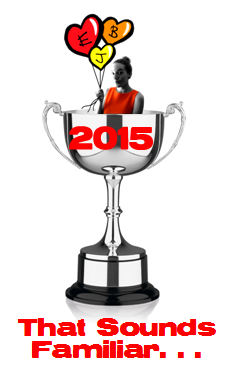 Winner Heroes Honourable Mention/s One Thing I Should Have Done

First things first: I think the claims of plagiarism against Heroes are ridiculous. But every year, there’s one entry that cops flak for being a “carbon copy” of something else (as in it’s slightly similar in the way that certain genres just ARE) and in 2015, that entry was our winning one. I’m giving it this award based on the attention those plagiarism claims received in the press – not because I think Heroes is a rehashed version of Lovers On The Sun (a song which annoys the crap out of me, if truth be told). 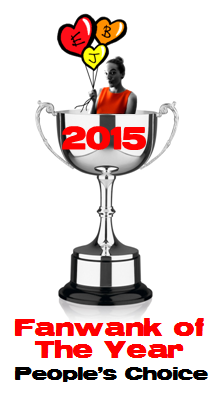 Fanwank entries may be drooled over by hardcore ESC fans in the contest lead-up, but they have been known to crash and burn (Kate Ryan’s Je T’adore being the obvious reference point here). Your choice for Fanwank of the Year, however, met pre-show expectations that it was a potential winner by…well, winning. Runner-up Amanecer, on the other hand, was a bit more Je T’adore.

The alternative (but boring) title of this award = Best Lyrics. How much merit a song’s lyrics have is super subjective, so keep that in mind as I say that Norway’s lyrics were my favourite, in a year where there were many interesting and insightful words put to music. The words of AMLM are quite sparse and simple, but their moodiness and ambiguity (for heaven’s sake, Mørland, put us out of our misery and tell us what you did in your early youth!) sends shivers down my spine. Debrah’s verse is the highlight. 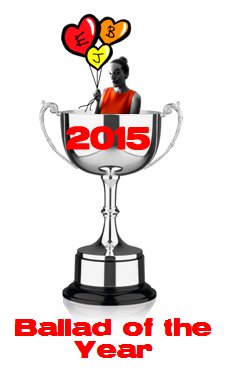 Winner Grande Amore Honourable Mention/s A Million Voices, A Monster Like Me

In such a ballad-heavy contest, at least we had some darn good ones to compensate for the depressing, dated ones. This was a tough category, but I have to single out Grande Amore as having the most ballady goodness. Drama, oomph, popera and gorgeous Italian (not to mention gorgeous Italian men) came together to create a crowd-pleaser and a half that ended up raking in televotes like nobody’s business. No other ballad featured more spine-tingling AND explosive moments. 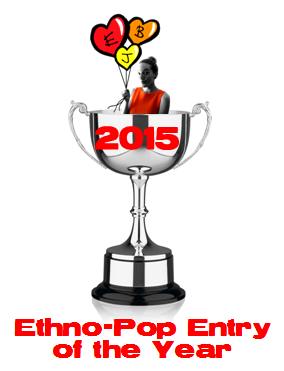 It’s not as if there was a truckload of ethno-pop to choose from *sniff*….but fortunately, Israel delivered everything I desire in the genre straight to my front door. Golden Boy is a fun-packed floor-filler (though not THE floor-filler of the year IMO, as you’ll see in a second) that takes full advantage of irresistible Middle-Eastern sounds in order to get us all rump-shaking. 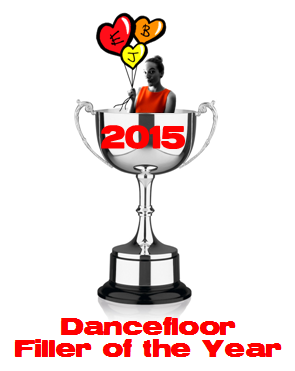 Call me overly-patriotic if you like…but I can assure you, this winner is at least 67% based on my objective opinion of which song would take a Euroclub from boredom central to buzzing in no time. If you were in the arena, feel free to smugly inform me that Israel or Serbia had way more people on their feet and flailing their limbs about. Meanwhile, I’ll be figuring out which dance move is best suited to the lyric ‘tonight’s so good’.

Based on the ratio of how much I hated it when I first heard it (and every time I listened to it up until I witnessed Genealogy’s live performance) to how much I actually almost kind of enjoy it now, Armenia wins this one. If you read my previous post (which of COURSE you did!) then you would have seen Face The Shadow on my list of the best-performed songs of 2015 – and it was the performance that was solely responsible for changing my opinion of the song. 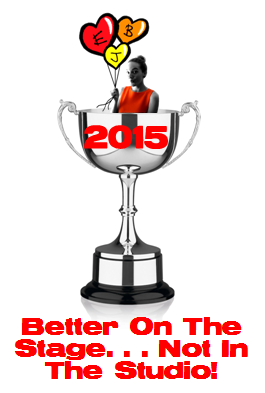 Don’t get me wrong – I reckon the debut Aussie entry is a great song in studio, and a perfect radio track. But it does ascend to superb status when it’s live. Guy is an artist who always appears to be having a ball on stage, and that’s the kind of attitude Tonight Again needs to make it a party-anthem…and to distract us from the fact that it is quite repetitive. 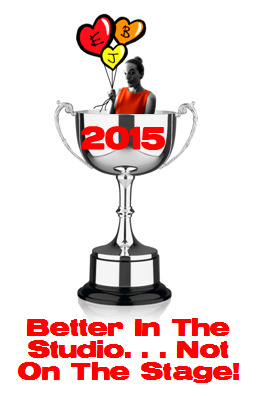 Winner Here For You Honourable Mention/s Hour of the Wolf, Walk Along

Speaking of perfect radio tracks, here’s one Slovenia prepared earlier! Here For You is an audio dream, but for me personally, Maraaya were unable to keep it from being overly static – and therefore devoid of enough energy – on the stage. This wasn’t a major issue in the Slovenian NF, but was a definite problem on the less intimate ESC stage. 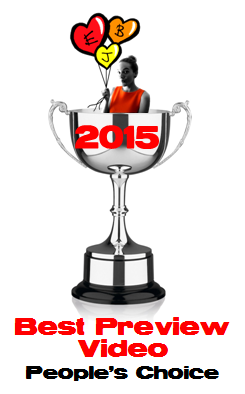 Norway’s unconventional dinner party triumphs over Spain’s CGI everything in this People’s Choice Award – and as I gave my vote to Mørland and Debrah, that’s fine by me. The only bad thing about their glamourous-yet-messy video, in which the duo is cool, calm and collected in the midst of chaos, is that it makes me mourn the loss of a similar atmosphere in Norway’s stage performance. I’m not saying they should have emptied KFC buckets over each other’s heads or anything; but a gloomier, retro-glam look would have upped Monster’s cred as a live song.

To be honest, I wasn’t overly impressed with any of the postcards this year (though the concept of them was cute). But how can I not acknowledge how badass Vaidas and Monika were in taking a literal leap of faith together for the sake of a This Time intro? While other acts were frolicking in fields with wild horses and dancing down Austrian avenues, those two were putting their trust in a cable that could have snapped at any moment (in my mind). One word, two syllables: bravo.

And that’s Part 1 *insert round of applause here*! I’m going to wrap things up before you lose 100% of the feeling in your popo, but I will be back later in the week to reveal the winners of The Performances, The Costumes and The Results EBJEEs.

Let me know what you think of the winners above, and tell me which awards you’d like to be able to vote for next year. I can promise more polls with more nominees in 2016!