First things first: I have an apology to issue. That apology is to this blog, for missing its sixth birthday last week. Oops.

I’m a terrible mother blogger, I know. But in the wake of my recent 400th post celebrations (and with life’s general chaos all around me) I thought all my milestones had been and gone for the year. My bad. Regardless, EBJ is now six years old (!!!) and my belated birthday gift is this hastily-constructed graphic. 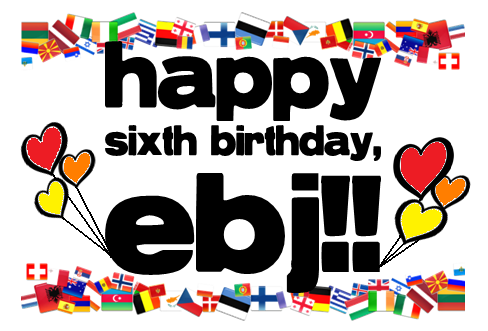 I’d like to say merci to anyone reading this right now, and to anyone who’s ever taken the time to read something I’ve posted throughout the past six years. I’m very appreciative of you. I mean, I was kind of hoping I’d have my own talk show and clothing line by now, but I guess I can live with just having (one or two) regular readers.

Still, if I get to the ten-year mark, and Drew Barrymore hasn’t been cast as me in a movie detailing  my life and times, there’ll be hell to pay.

Moving on now (mercifully) to le subject of today’s post: the ones that got away. It’s tradition for us all to moan about the national final entries that didn’t make it to Eurovision before the show, and even more afterwards as we wonder what could have been. I’ve already listed all my favourites from the 2014/15 season here, so now it’s after-party time!

I think we can agree that some countries, like Sweden, inarguably put their best foot (and most tight-fitting trousers) forward this year. Others, like Switzerland, just weren’t meant to make the final of ESC no. 60., and nothing in their NFs could have changed that.

Then there are the countries that may or may not have made the best decisions on who should represent them, if they wanted to achieve their best possible Eurovision result. Keeping those countries in mind, I’m about to count down my top ten could-haves (i.e. the songs that would have provided similar results but made nice alternative choices) and should-haves (i.e. the songs that would have climbed higher on the scoreboard for sure) in relation to the outcomes of the 2015 contest. Remember, this is a subjective topic, and all opinions are purely my own. I encourage you to disagree with them in the comments (in a respectful manner, of course).

COULD have been sent by Belarus

If I had to single out one song from the Belarusian final that might have squeezed through to the Eurovision equivalent – or at least equaled Time’s not-too-terrible 12th place – it’d be Supernova. Written by Swedes Ylva and Linda Persson (if purchasing songs from Sweden is good enough for Azerbaijan, Georgia and Russia, it’s good enough for Belarus) this track is an interesting hybrid of ballad and electronica, with decent build and a strong chorus that sticks. If it were paired with a backdrop similar to Polina Gagarina’s, Janet in a floaty dress, intensive use of the wind machine, and perhaps some kind of cool last-minute reveal á la Moldova 2013 (although that wouldn’t be required to top Uzari & Maimuna’s nothingness), Supernova would have been…well, super, on the ESC stage. Unfortunately, it finished second-last in Belarus. Trés cray.

PS – The video above features the studio version, since the only video of the NF performance on YouTube is of rubbish quality. But do check it out if you think you can withstand the static sound and pixilated picture. Janet’s vocals aren’t the strongest, but the staging is pretty epic.

SHOULD have been sent by Greece

As we all know, Greece did send a glamorous woman in a gown with a belter of a ballad to Vienna. Too bad for them that such entries were a dime a dozen there – and done better by the likes of Russia and Latvia. I know Greece would have qualified even if Maria Elena had actually farted tears and fears into the microphone for three minutes, but I can’t help thinking they should have sent their NF runner-up Jazz & Sirtaki instead of One Last Breath. It’s the kind of thing we expect from Greece: it’s ethnic, catchy, fun, and instantly identifiable as being Greek, and I don’t see those as negatives. Not only would it have upped the energy and the amount of ethno-pop in the 2015 lineup, it would also have had a good chance of getting Greece back onto the left side of the scoreboard, if only just.

COULD have been sent by Estonia

Okay, Team GTY…you can put that pitchfork down. I’m not here to claim that Stig and Elina, who won Eesti Laul 2015 by a massive margin and finished a respectable 7th in Vienna, shouldn’t have represented Estonia. I’m just saying that the more joyful Burning Lights is an alternative that I wouldn’t have minded seeing/hearing at Eurovision. It’s a tasty slice of contemporary, anthemic pop-rock, with great lyrics in which nobody smiles to the dog (definitely a bonus). And, like Softengine’s Something Better did in Copenhagen, it would have stood out from the crowd as a rockier song in a field full of – yep, you guessed it – ballads.

SHOULD have been sent by Malta

After hearing this song for the first time, I started to believe that fate had forced Christabelle to trip up in her previous MESC attempt purely so she could make a victorious comeback with a much better song. Ultimately, she made a comeback that resulted in second place, which is something – but in my opinion, Malta made a mistake opting to leave Rush behind. Amber’s Warrior didn’t know what it was as a song, and the revamp only emphasised that. There was a sense of cohesiveness missing from the overall package put forward. Rush, on the other hand, was straight-up fresh-and-fun pop that would have been difficult to stage badly. We’ll never know for certain, but I swear to Chiara…if Warrior only just missed out on qualifying, then Rush would have made the cut for sure.

COULD have been sent by Germany

Eurovision 2015 was all about (well, somewhat about) the wonderfully weird. Entries like Rhythm Inside and Love Injected – which aren’t commonplace in the contest just yet – proved incredibly popular, and I for one fell head-over-heels for them. I’d be saying the same about this number from Laing, had they represented Germany instead of Ann Sophie (via Andreas Kümmert). I’m a Black Smoke fan, but I think Germany could have sent Wechselt instead and not regretted it – mainly because something so intriguing wouldn’t have finished last with the dreaded nul points (in my mind, anyway). This song is so cool, and its staging at Unser Song Für Österreich was even cooler. Trust Germany to make a costume reveal edgy, not cheesy.

COULD have been sent by Norway

In case you didn’t know already, Mørland and Debrah Scarlett were the pinnacle of MGP ’15 pour moi, and there’s no way I would have wanted anything but A Monster Like Me to go to Eurovision. But in a parallel universe in which they didn’t enter the NF, it’s the amazing Karin Park I’d have been crossing my fingers for. The woman behind I Feed You My Love decided to enter as an artist this year, with the equally cutting-edge and atmospheric Human Beings. She gave a performance that sent shivers down my spine (that bit over the wind grate with the billowing kimono was a defining moment in my life). Hypnotic is the key word here, aurally and visually-speaking, and that’s always a helpful adjective to be labeled with when you’re trying to secure people’s votes. Not that it worked too well in Norway…Karin didn’t even make the top four. I’m still mystified.

SHOULD have been sent by Hungary

It’s never fun when your least favourite song in an NF ends up winning it, and that’s what happened to me with A Dal this year (and UMK, and DMGP). In time, Wars For Nothing did grow on me. However, it’s still too sleepy for my liking, and I can’t connect with it emotionally. That’s not a problem I have with Ne Engedj El, performed by the fabulous Kati Wolf sans 2011’s massive hair and shiny satin disco dress. Yes, it’s a lady ballad, but it has more life to it than Boggie’s (then again, so does Knez’s face, which is really saying something) and I personally feel the feels when I listen to it (which is about ten times a day). It’s a beautifully constructed song with a pretty melody, and Kati did it justice in the NF with a performance that was both fragile and powerful. I really, really wish Hungary had given her the second shot she was after with this.

SHOULD have been sent by Denmark

Denmark and I rarely see eye to eye, meaning they hardly ever pick my favourite DMGP entry to represent them (2014 excluded, as I scubidubidapdapdididid love that). A few months ago, I was desperate for Anne Gadegaard’s Suitcase to go to Vienna on behalf of last year’s hosts, but in hindsight, I’ve changed my tune (so to speak), at least with regards to which DMGP song would have served Denmark best. For me, it’s Babou’s infectious Manjana. This song is a three-minute tropical party – kind of like a more urban version of Allez Ola Olé. Sure, it’s a tad generic, but so is The Way You Are, and generic dance > generic retro rock. Plus, a) it would have been great to hear Danish at Eurovision for the first time since 1997; and b) we desperately needed more floorfillers in the 2015 field, and Manjana would have been different enough to those we did have (from Israel and Serbia, for instance) to hold its own.

SHOULD have been sent by Finland

FYI, I don’t want to take anything way from PKN; nor do I feel that they didn’t deserve their UMK victory. This list is about the national finalists I would have preferred to see/hear at Eurovision, and/or those that would likely have given their countries a better result. In the case of Crossroads, it’s both: a song I really wanted to represent Finland, and one that I believe would have gotten them into the final. Satin Circus may have qualified based on their less divisive, more mainstream musical style, which isn’t necessarily a positive thing (Finland made an awesome decision to send punk to a contest unaccustomed to the genre, even though it backfired) but I feel like there was a Crossroads-shaped hole in the Viennese lineup of down-tempo, melancholy pop and preachy ballads. It’s such a fun sing-along song, and, like Tonight Again, it’s perfectly suited to being performed at Europe’s biggest party (‘Tonight we can be young’ = so apt). Basically, I missed it in a big way, and I’m hoping that the boys bring their brand of youthful pop-rock back to UMK, ASAP!

And now, my most painful missed opportunity of the year…

SHOULD have been sent by Iceland

It’s not just the Danish who disappoint me: Iceland does the same on a regular basis by leaving something quirky and brilliant behind at Söngvakeppnin in favour of something boring vanilla. Exhibit A? The 180-second-long chorus that is Unbroken triumphing over the bizarre yet beautiful creation that is Fjaðrir (or Feathers, but I’m specifically talking about the Icelandic version here) by SUNDAY. I know, I know…SUNDAY didn’t even come second to María, so it’s not technically a case of ‘if only!’. But Fjaðrir is so amazing, with its Margaret Berger-esque visuals and mesmerising industrial-pop sound, that I’m going to say ‘if only!’ anyway. There are no shrill choruses to be found here – in fact, the choruses are more low-key than the verses, which is part of what makes the song so interesting. And, as usual, the use of Icelandic adds an extra something special. I’m in love.