SURPRISE!!! Just when you thought I’d become so bogged down in the depths of Post-Eurovision Depression that I’d lost the will to blog and legged it to go live in an underground cave in Siberia where I’d never hear the words ‘Good evening, Europe!’ uttered again *draws breath*, here I am.

It’s been so long since my previous post, I don’t think we had a host city for Eurovision 2016 when it went up. But, as everyone on the planet is now aware, we are Stockholm-bound, baby! Sweden’s capital has gotten the gig, and the Globe Arena (which also housed the contest in 2000) will be the centre of the action next May whilst looking as much like a giant golf ball as ever.

Speaking of things that look like other things…welcome to today’s post, which is a) an extravaganza of lookalikes, and b) my last post to be purely focused on ESC no. 60 for a while (at least a week, I promise). I’ve done a LOT of doppelganger posts in the past, and as they’ve been pretty popular – and as I spotted quite a few familiarities in the forty faces of 2015 – I saw no reason not to add another one to the EBJ archives.

In the words of Mr. Eurovision himself – that’s three-time winner Johnny Logan, for the uninitiated – what’s another year? Let’s take another wander down Lookalike Lane. Prepare to be not as impressed by the following as I’m implying you should be! 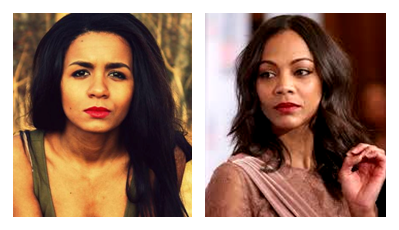 The only notable difference here is that Aminata’s eyebrow game is a heck of a lot stronger. I guess Hollywood’s beauty salons aren’t all that.

The same megawatt smiles AND the same preference for parting their hair on the left? Case closed – these two are totally sisters from different misters.

Boggie looks like Kate Middleton (a.k.a. Catherine, Duchess of Cambridge)

I swear this isn’t just a convenient pairing of photographs…but if you’re not buying it, you’d have to at least agree that Boggie looks more like Kate’s sister than her actual sister does. PS – note the shared penchant for pearl jewelry.

This being the case, Edurne should expect Leonardo DiCaprio to make a move on her any day now.

Si, it’s true – Edurne somehow manages to resemble two people who in turn look nothing alike. In this case it’s a fellow blonde, blue-eyed bombshell who routinely pulls out the ‘I’m checking my hair for lice’ pose when participating in a photo shoot.

I’m telling you, it’s something about the head shape. And/or the gradually receding hairline that will see both Daniel and Draco Malfoy become bald within the next five years.

If you like your men with flowing blonde locks (but Thor’s too buff for your taste) then here’s two I prepared earlier. No word yet on whether or not Conrad likes to be tailed by scantily-clad cops at all times, á la Eduard. 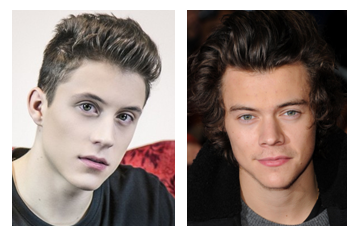 Okay, so this isn’t the most astounding lookalike I’ve ever come up with. But squint at the photo above whilst chopping an onion, and you might see the similarities that I do. And while you’re doing that, I’ll be internally debating whether Loïc or Harry has better hair.

Fast-forward fifteen years, and Måns will be a dead ringer for Hugh (who was trained up as an actor on my university campus, by the way…don’t say I never provide you with fun facts). This, of course, will make him Hugh JackMåns.

Here’s another 1D comparison that, if I’m honest, isn’t the last you’ll encounter in this post. Stig may have chopped and changed his coiffure for Eurovision purposes (there is a 99% chance that isn’t the actual reason, but just roll with it) but such spontaneity is what makes him beautiful (SEE WHAT I DID THERE?). 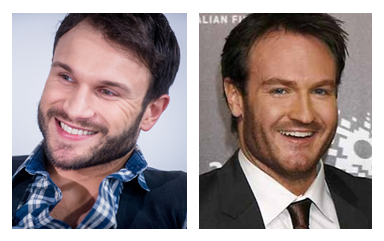 I’m not going to lie. I’m proud of this one. From the strong jaw to the stubble, and (most) of the stuff in between, feasting your eyes on these two faces at once is to truly be seeing double. Except for the fact that it isn’t. But it’s close enough.

Hey, I’m allowed one love-child lookalike (and one final 1D reference). Gianluca might be a better singer than Zayn and Nick combined (which is not so much a dig at them as it is a massive compliment to GG) but he’s just as attractive as their faces would be combined. 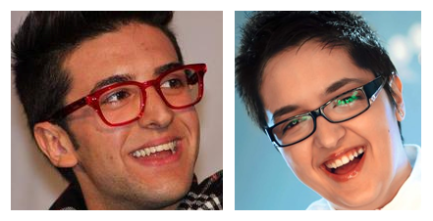 And Piero’s my pick for hottest third of Il Volo? I guess that means I’ll settle for Marija in the event that he and I aren’t meant to be. 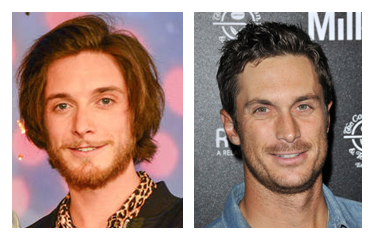 Question this one, and I will refer you to an optometrist immediately.

In case you didn’t notice, there were two famous faces attached to the less famous faces of Austria’s 2015 entrants. If anyone can come up with a dead ringer for lead singer Dominic, then the trilogy will be complete!

Both of these guys groom their facial hair in the same way (though Calin’s is more refined) and neither have any hair on their scalp that requires grooming. The evidence of their blood relativity is right there in front of you, people.

Well, that’s my list of lookalikes exhausted. This post was requested (a very, very long time ago) by Wolfgang from Germany. If there’s a type of post you’d like to see more often on EBJ, a theme you want to suggest for a Top 10, an edition of the ESC you want me to Retro Rank…anything at all I can put together for you, then let me know in the comments, via the Contact Jaz page, or on social media. I promise I’ll make it happen ASAP, not because I’m short on ideas (believe me, my backlog of Eurovisual ramblings-in-waiting is bigger than Rona Nishliu’s dreadlock beehive) but because I want to make sure my content is the kind you guys will come back for.

Without me having to bribe you, that is.

If you’re up for commenting down below without a payoff, then answer me this: did I actually identify all of Vienna’s doppelgangers, or are there others yet to be exposed? Which 2015 artists had you wondering if a famous face had been recruited by a country for competition purposes?

6 Responses to “SEEING DOUBLE? All the doppelgangers of Eurovision 2015 (finally) exposed!”