If there’s a prize for being late to the party (the party being reviewing Eurovision 2014) then back off, because it’s mine! The thing is – and you’ll be bored of me rehashing this – since I was too excited to study during the ESC week, and too depressed to be productive in the few days afterwards, I’m now in a period of chaos where I have multiple MAHUSIVE assignments due within the next week (my last week of the semester, thank the Lordi) that I’ve barely begun. Therefore, I’m having to work my butt off with little time to blog, which sucks. That’s my excuse for why the second part of my final review is coming out over a fortnight after the contest, and over a week after the first part.

This is basically just a run through of the scoreboards from the final and the semis, with comments by moi, plus a recap of the Australian online vote and a mini post-show ranking to show you how my preferences were changed by epic lighting and/or magnificent costuming. I’m not going to get into the intricacies of the split results much, as similar analysis has been done (The Eurovision Times published a a few particularly good ones you can find here and here if you haven’t checked them out yet) so this is more of an overview accompanied by catty judgments.

Two things about the voting sequence before we get to the results:

a) Crossing to all of the spokespersons at once on the big screen? More of that please. Although if I’d spotted Alyona Lanskaya I would have remembered to mute her impromptu and totally unnecessary version of Solayoh. You had your moment last year, Alyona. NO ONE CARES.

b) Umm, that early winner announcement! I’ve had more than one night’s anger over that. After the backlash caused by the same thing in Malmö, I assumed it wouldn’t happen again. But oh no, charming Nikolaj and adorable Pilou lost a bit of their charm and adorableness when they announced Austria as unbeatable with about two or three countries left to vote (I know they were just doing what they’d been instructed to, but I have to lash out at somebody). We all knew Conchita was the winner – to announce it early took away from the significance of the remaining countries votes, turning them into an afterthought. I am hoping this doesn’t become a tradition.

Now, those results…we’ve all seen them, but who wouldn’t want to see them again and then hear me complain about Greece not beating Romania for several paragraphs?

1. Austria 290 – No real surprises here. After Conchita’s performance I was thankful I’d predicted Austria as a probable winner. Still, with the spread of scores and the relatively low gap between 1st and 2nd place, this was no landslide. 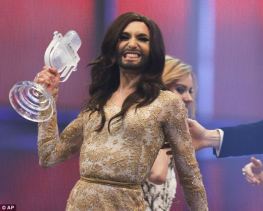 If you don’t have proper weights, why not use your Eurovision trophy to tone those arms?

2. The Netherlands 238 – I’m thrilled for the Dutch, still. If Anouk had been last year’s runner-up, I’d have struggled to understand it, but The Common Linnets captured the mood and created a magic that I totally got (in the end).

3. Sweden 218 – I’m happy with this, and I hope Sanna is too. I knew my favourite song of the year wasn’t quite going to go all the way after a certain point, but because I was worried Sweden could head in the direction of Hungary in 2011, the bronze position is brilliant. 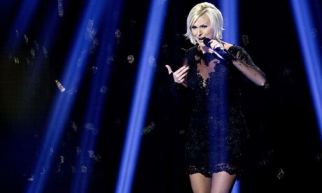 4. Armenia 174 – Again, this ain’t exactly shocking. I never saw Armenia winning with Not Alone, as much as I love it. Finishing in 4th, they’ve got to be at least a teensy bit pleased that they blew Azerbaijan out of the water.

5. Hungary 143 – This is proof that Hungary is getting better and better at playing the Eurovision game every year. A very good, very current song that many thought would bomb because of its subject matter triumphed instead. Well done Andras!

7. Russia 89 – Now THIS was a surprise. As the televoters much preferred it over the jurors, I put it down to the staging, which I personally couldn’t tear my eyes away from. The hair trick and giant see-saw are surely what people remembered when they picked up their phones.

10. Spain 74 – I guess the lesson here for Spain is if they send an attractive brunette who can sing the leg off a chair to perform a typically Eurovision ballad, they’ll secure themselves 10th place. That’s a good showing for Spain.

‘If my hair touches any of this electrical equipment, we could be in trouble!’

12. Romania 72 – Romania and Moldova are experts in just missing out on the top 10. In this case, Romania should have completely missed out IMO.

14. Poland 62 – The jury sealed Donatan & Cleo’s fate via the drag effect of ranking them 23rd to the televoters’ 5th. Not that 14th is a terrible result – I’m just mourning what could have been for one of my favourite entries.

17. United Kingdom 40 – Ouch. After weeks of steadily declining odds and promising rehearsals, Molly failed to meet expectation and then some. But there was only 34 points between her and Ruth, which is something of a consolation.

19. Montenegro 37 – Not only did they make the final for the first time, but Montenegro beat big players Greece, Italy and Azerbaijan. That’s a win for them as far as I’m concerned. Figure skaters = success. Just ask Dima Bilan.

20. Greece 35 – How…just how did this happen? I am CRUSHED. Okay, so when I step back and look at all the factors I can kind of see how it happened. But even cookie-cutter, dated Aphrodisiac did better than this!

22. Azerbaijan 33 – So, they’re not invincible after all, eh? For the first time since their 2008 debut, Azerbaijan finished out of the top 10, and not narrowly. I have to admit, it pleases me to learn that they are capable of failure, since up until now I assumed they’d do amazingly even if they sent a bag of garbage (literally) to represent them, and that irritated me.

24. San Marino 14 – Props to SM for not coming last. I hope such an unprecedented result doesn’t encourage a fourth consecutive appearance from Valentina (and Ralph)…*shudder*. 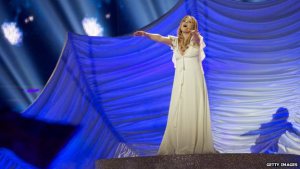 It was Valentina’s incredibly accurate zombie impression that got her to the final.

26. France 2 – Not for the first time in recent history, one of my most-loved entries lost the final. Waldo’s People in 2009, Tooji in 2012, and now this! Maybe Moustache wasn’t very effective in such a grand setting, but…TWO POINTS?!? I guess I should just be grateful that Twin Twin didn’t pull a Jemini.

Australia calling! The results from our unofficial final vote

Over on broadcaster SBS’s Eurovision site, us fans Down Under had the chance to thumbs up or thumbs down each entry as was our want. I couldn’t even do that, because of state-related time zone issues, so it was up to the rest of my fellow Aussies to decide our “points”. Here’s our top 10, in traditional ESC fashion:

4 points went to the UK

8 points went to the Netherlands

So it looks like Conchita has recruited herself a fan club over here as well. We actually agreed with Europe’s entire top 3 (albeit in a slightly different order) but put Finland, Iceland, Poland (woohoo!), the UK, Switzerland and Malta in place of Armenia, Hungary, Russia, Norway, Denmark and Spain. Oh, and in case you were wondering, San Marino came in 26th. So I guess it wasn’t so much a Maybe here as a Definitely Not.

Back To The Semis: The Winners, Losers and Almosts

As usual, seeing the songs performed live for the real deal changed my already changeable mind a LOT. Once again I used this handy sorter to gauge my own opinion, and below you can see my post-show top fifteen (because I didn’t think anyone would want to read through my entire top 37 for the third time) and how they’ve moved from my most recent ranking done just prior to the first semi. I’m sorry to disappoint those of you who might have been hoping for a renouncement of my Team Sanna membership.

So I’m clearly crushing on Finland after Softengine rocked the Hallerne…what about you? How have your rankings changed since the show?

That’s about all I have to say on the scores at the moment. I hope this overview was worth the delay in one way or another! If you’re still up for complaining and/or rejoicing in the outcomes of this year’s contest, I’m up for listening, so comment down below with any of your unaired thoughts.

NEXT TIME: Watch out…the 2014 EBJ Awards for Eurovision Excellence are coming! I’m about to open my People’s Choice polls, and I want you to vote to decide each winner (duh. That’s the whole point) so make sure you drop by in a few days’ time to have your say. This year you get to vote on more awards than ever before in the two-or-three-year history of the ceremony, so get excited! Please? Just a little bit?