You know, I know, we all know Russia isn’t in the global good books right now. But seeing as they were the very last country to reveal their Eurovision entry this year (having originally planned to be one of the first) and that this is a blog about music, song and a competition in which you never can predict where such participants as Spain will get their douze points from (not) I figured it wouldn’t hurt to take this time to make Russia the focus of my latest spotlight. Why not read about them/discuss them before it becomes totally taboo to do so?

So, that said, let the trip down memory lane begin. From 1994 to now (one pre-qualifying round from the 90s and the Tolmachevy Sisters not included) this is Eurovision, Russia-style. 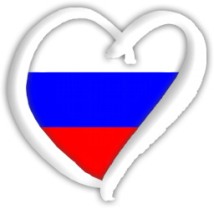 Never Let You Go by Dima Bilan (2006). Two years before he had a white shirt, a bare chest and an Olympic figure skater, Dima had a singlet, a mullet and a penchant for stuffing women into pianos. His less stylish (oh god, the mullet!) but just as effective presentation in Athens, plus the fact that NLYG was/is an epic R & B-cum-ballad that I still love to watch and listen to as much as ever, makes Dima’s first Eurovision attempt the real winner in my mind. Not that he deserved to beat Lordi (and I’m not just saying that so they won’t kill me); it’s just that Believe, to me, is an inferior song that happened to be in the right place at the right time. 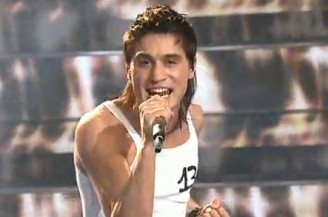 Dima sings the praises of his epic mullet.

Fun fact that you probably already knew #354216: Dima has tried to come back to the contest a third time, accompanied by t.A.T.u’s Yulia Volkova. That was back in 2012, when he was beaten out not by a bunch of Finnish monsters, but by a bunch of precious grannies from Udmurtia. They say if you can’t beat ‘em, join ‘em, so expect to see Mr. Bilan frocked up in a shawl and baking wood-fired treats with the Babushki any day now.

Nobody Hurt No One by Natalia Podolskaya (2005). This just did nothing for me. Well, nothing except make me pine for a more grammatically pleasing song title. Middle-of-the-road chick rock evidently did little for Europe too, because Natalia finished 15th, giving Russia one of its lowest placings on record.

Vechni Stranik by Youddiph (1994) – it’s not so much the song, but Youddiph’s, may I say, totes cray outfit, that made Russia’s debut one to remember. See below for more info…

Solo by Alsou (2000) – Russian pop is in a league of its own, and the sixteen-going-on-twenty-six-year-old Alsou gyrated her way through a great example. 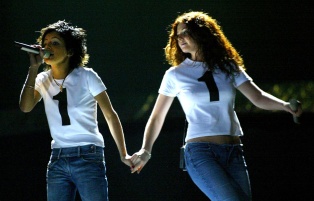 Yulia and Lena: pushing the boundaries of the ESC dress code.

Believe by Dima Bilan (2008) – yeah, he won, blah blah blah. What I’m really interested in is how you can create a surface that can be figure-skated on and stood on in bare feet. Also, how good of an idea it is to be barefoot in close proximity to someone who has figure skates on.

Party For Everybody by Buranovskiye Babushki (2012) – thoughts on the song aside, you can’t help feeling warm and fuzzy for these adorable grannies. The whole world fell in love with/was confused by them.

Believe/Get You by Alex Sparrow (2011). You could easily argue that the performance of Believe, and not Believe itself, won Eurovision, and I’d be inclined to agree with you. It wasn’t flashy, and there were no costume reveals (unless you count Dima showing the world he’d had his chest waxed that week) but it was organic, eye-catching and full of star power.

Not that I don’t enjoy flashiness…Alex Sparrow’s stage show was that and a half. The lighting, acrobatics and slick dance moves were great, but the coolest aspect was obviously the light-up leather jackets. Where do I get me one of those babies?

https://www.youtube.com/watch?v=C-3ohaRN3MM (Apologies, but my embedding function had a nervous breakdown halfway through posting this. #techfail.)

Youddiph. Never has a costume elevated an entry so much. Nor has a costume ever been so versatile – it was like the Blu-Tac of the fashion world. You can’t appreciate the magic via still photography, so watch as Youddiph’s seemingly simple red number becomes the star of her show.

Dina Garipova (2013). Say what you want re: the schmaltz, but you can’t deny Dina’s got a voice. She is, after all, The Voice of Russia. She belted out What If, which doesn’t seem an easy song to sing, with ease last year in Malmö. If you want proof, check out this (often hilarious) recap of the 2013 contest with the music stripped out. Dina’s turn starts around 1:40.

I hate to be Russian off like this, but that’s all I have to say about this country at the moment. It remains to be seen how the Tolmachevy twins will do in Copenhagen, but I think it’s safe to say the girls won’t be the first act to win JESC and ESC. What about you?

What will Russia’s result be in Denmark? Have they impressed you or disappointed you throughout their ESC history?

NEXT TIME: I’m going back in time again, on this occasion to re-rank the songs that graced the stage ten years ago in Istanbul – or as we now refer to it, Year Ruslana. But Ruslana’s not my #1 of 2004…stay tuned to find out who is!