If you’re like me, under the impression that Malmö’s Eurovision could not possibly have happened more than a few months ago, think again…and then collapse in shock when you realise we’re just over four weeks away from contest 59. Here’s hoping there will actually be a stage for this year’s contestants to perform on by then. Right now, all eyes are on Amsterdam’s Eurovision In Concert, which will give us more of an insight into who’s going to nail and who’s going to fail the show proper. But since I’m not currently en route to the Netherlands (and not bitter at all about that *grumbles very bitterly indeed*) I have the opportunity to continue on my quest to cram in as many posts as possible before the big event.

My reviews, predictions, and mini-series of Malmö flashbacks are soon to come, but today I thought I’d head back in time to contest 49, which took place ten whole years ago in Istanbul. I’ve done some Retro Rankings in the past (which you can check out here) and I thought it would be interesting to choose the 2004 contest this time around, not long after ranking 2014 for the first time. Back then, 36 countries competed, six of whom have since opted out of the ESC. The quality of songs was pretty low IMO, but among the hideous and sleep-inducing entries were some absolute gems. Without further ado, here is how I rate all 36 a decade later.

Just one thing…I haven’t commented on all of the songs, so if you want a reason for the position of one I’ve left ambiguous, just ask. Also, here’s a recap of the Class of Istanbul for those of you who need a pre-ranking refresher.

Now, my rankings. For real this time.

1. Serbia & Montenegro/ Lane Moje by Željko Joksimović – 2004 may have been a crappy year, song-wise, but it did introduce me to what would become my favourite Eurovision entry OF ALL TIME! Sorry to put that so aggressively. ŽJ’s first and best contest foray is hauntingly beautiful on the first listen and equally so on the 567, 869th listen (which is around about where I’m up to) and I’ve never come across anybody who doesn’t agree with that to some extent. If you happen to be that person and make it clear to me, I may get violent.

Serbia and Montenegro were more than all white.

2. Ukraine/ Wild Dances by Ruslana – Despite my love for the above, I would never dream of questioning whether Ukraine deserved their one and only win to date. In fact, this has to be one of the most deserving winners ever. Even if we cast the perfect performance, costumes and whip-cracking aside, the song itself is still a flawless example of ethno-pop/rock. Ruslana knew how the ESC should be done (and she’s also available to be hired for parties as a Xena impersonator, FYI).

3. Turkey/ For Real by Athena – The relaxed approach many host countries take with their entries (with the pressure to win off/desire to win again nonexistent) often results in effortless success, because they’re not trying too hard. When Turkey hosted, their entry was chill, quirky and fun, but energetic enough to get the crowd going like no other. I’m actually having to clamp my mouth shut as we speak to stop myself from bursting into that chorus. Up, I wanna bring you up…

4. The Netherlands/ Without You by Re-Union – In the first year of televised semis, the Netherlands made the final with this cruisy sing-along song (and nothing short of Anouk got them back there). It didn’t do much once Saturday night came, ending the evening in 20th place, but I’ve always had a soft spot for it. It may be humble (meaning many viewers would have used it as their toilet break) but it provided some sweet relief from the more extravagant efforts.

5. Austria/ Du Bist by Tie Break – In case you didn’t know, I love a boyband. Naturally, for me, Eurovision + boyband = JACKPOT. Prime Minister, Eden, Blue…I’ve squealed hysterically over them all. So it is that as lame as Du Bist was on a fancy stage in a mahusive arena – and as lazily as the three guys were dressed for such an event – I still give it the thumbs up.

It wasn’t Casual Friday, but Tie-Break clearly didn’t get the memo.

7. Albania/ The Image of You by Anjeza Shahini

9. Belgium/ 1 Life by Xandee – Eurodance magic, that’s what this is. Not once have I watched/listened to it without doing the dance steps Xandee and her backup duo/lady and gentleman lover (that hip rolling bit gives everything away) bust out at the beginning. Because YOLO – which is coincidentally what the 2014 version of this song would be called.

11. Germany/ Waiting For Tonight by Max

Before there was Greta and Jonsi, there was Just Jonsi. And his finely sculpted cheekbones.

14. Norway/ High by Knut Anders Sørum – Norway had the unfortunate honour of being last in the ’04 final, and not for the first or last time, I have to wonder why. High was far from Wild Dances amazeballs territory, but it was much less yawn-worthy than a bunch of other finalists, and had an anthemic quality that worked well in the arena.

16. Belarus/ My Galileo by Alexandra & Konstantin

17. Romania/ I Admit by Sanda Ladosi

18. Russia/ Believe Me by Julia Savicheva

19. Bosnia & Herzegovina/ In The Disco by Deen – Before B & H brought us such spellbinding masterpieces as Lejla and Bistra Voda, they had this to offer. There’s quite a contrast there, you might say. I don’t hate this – it’s a bit of a guilty pleasure, and I think of it as the rich man’s version of Hungary 2009 – but I much, much prefer the Bosnia & Herzegovina that gave us class…not ass. 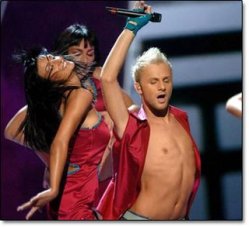 20. Sweden/ It Hurts by Lena Philipsson

21. Greece/Shake It by Sakis Rouvas

24. United Kingdom/ Hold On To Our Love by James Fox – Just looking at this written down makes me yawn. Like so many entries the same year, the UK’s was perfectly nice, but extremely boring. Adding to my pain is the fact that their NF that year had at least three better options, including one of my favourite NF songs EVER from a boyband (!) called Hyrise. Hashtag if only.

27. Croatia/ You Are The Only One by Ivan Mikulic

28. Denmark/ Shame On You by Thomas Thordarson

29. Israel/ Le’ha’amin by David d’Or – I’m sorry to say that when David opened his mouth to sing his first note, it marked the first time I laughed out loud at anything Eurovision-related (which says a lot since Year Lordi was the first contest I saw). There are decent elements in this song, but that voice! I just can’t take it seriously. It’s a case of what I now refer to as ‘The Curse of Cezar’ – only it didn’t work out so well for non-qualifier David.

32. Ireland/ If My World Stopped Turning by Chris Doran – And the ‘Why Bother?’ Award for Most Pointless Attempt to Win Eurovision goes to…Chris Doran! Let’s have a round of applause, if you’re not unconscious. Brian McFadden of Westlife fame (here I go again with the boybands) co-wrote this snoozefest, and because I know he’s capable of writing way better stuff, I blame him entirely for this faux pas.

35. Lithuania/ What Happened To Our Love by Linas & Simona

36. Switzerland/ Celebrate by Piero & the Music Stars – Piero and his music “stars”* remain the only act to have received zero points in a semi final, and there’s no confusion as to how that happened. Celebrate was like a low-grade JESC entry, only performed by adults dressed like children, which made it so much worse. The lyricist clearly had the reading comprehension skills of a four-year-old.

* While they were onstage, their star status was easily challenged. But they did give a decent a cappella performance in the green room which was worth at least one point.

I’ve had my say, so now it’s your turn. Do you think I’m crazy putting the Swiss on the bottom and that Piero should be Celebrate-ed instead? Did Ruslana whip-crack her way into your heart, or do you think Wild Dances was overrated? Whatever your opinion on the entries of Istanbul, let me know below!

NEXT TIME: Malmö gets the full recap treatment as I look back on the stats, results and best bits of Eurovision 2013.