Bonjour, and welcome to Super Saturday the Second! This one’s not going to be quite as super as last week’s, if you classify “super” by the amount of final decisions for Copenhagen being made. Seven days ago we had picks from Finland and Switzerland, whereas this evening, reigning JESC champ Malta is the sole selector of a 2014 entry.

Don’t curl up into a ball and sob helplessly, however – there’s plenty of action elsewhere to make this weekend one of the happening kind. From Sweden’s Sanna Nielsen making her 7th attempt to represent her country, to last year’s Hungarian runner-up looking to push one place ahead, this may not be THE night (as far as Kurt Calleja is concerned) but it’s certainly a decent night.

Before I get on to further NF discussion, I have to mention another competition taking place in Europe at the moment. It’s just a little insignificant thing called the Winter Olympics…I don’t know if you would’ve heard of it. Ha. Ha. ANYWAY, the Games have begun, and that was cemented with last night’s/this morning’s spectacular opening ceremony (depending on where you are, it could have taken place at any given time) in Sochi. Now, I say spectacular, but I must admit to falling asleep towards the end of the athlete parade. During the ceremony for London 2012, I only made it to Lithuania before passing out, so I consider making it past Ukraine this time a major achievement. What I can remember up until that point was pretty epic, though – not only was a Russian flag constructed out of people on the stadium floor, but they made it wave. Bravo.

Eurovision takes priority over the Olympics tonight, but I’m still keen to catch as much figure skating, ski jumping and luging as possible without creating a Jaz-shaped indentation in my couch. If you’re not feeling MESC or Melfest, maybe you’ll end up tuning in too. For those winter sports un-enthusiasts, I’ll quit the Sochi talk now and move on to the aforementioned Super Saturday action from around the continent.

Last night, six artists were sent packing in Malta’s largely pointless semi final (either kick out a decent amount or don’t bother, guys!) including two-time Eurovision rep and million-time MESC attempter Fabrizio Faniello. To be honest, that wasn’t a great loss. Nor were the five others that now have zero chance of winning tonight.

What we’ve been left with is one of the best line-ups Malta’s had in ages, featuring some very un-Malta-like stuff. I don’t say that to be offensive – it’s just that Malta has this way of cramming their NFs with middling pop songs and ballads with awfully cliché lyrics, and in 2014, there’s much less of that. Awesome.

In order of performance, this is the final fourteen:

I feel like it’s either going to be one of the fan favourites that wins, or some random song that nobody rated. I’ll do the best I can to predict it right; but first, my preferences for Denmark are…

One Last Ride – yes, I have been overly excited since I found out Daniel, of JESC fame, was aiming for adult Eurovision. But believe me when I say my adoration only clouds my judgment of his song a tiny bit. OLR is the business, people! Great verses, a great chorus, catchy, well performed, and exactly what I was referring to when I said ‘un-Malta-like’.

Will the hands that belong to this face carry the Maltese flag this year? I sure hope so!

Hypnotica – is it a copy of Euphoria? No. Is it highly original? Well, no. But this dance track has sucked me in, probably using the hypnotic forces Jessika is singing about.

Coming Home – it’s Mumford and Sons meets Americana country, and the results are pretty darn good. Apart from the risk of Sjonni’s Friends suing Firelight for stealing their song title, I don’t see any problems with this going to Copenhagen.

Take Me – Pamela is one of the fan favourites, and it’s not hard to see, or hear, why. Her song is a very pretty ballad, and it got me despite the fact I was initially desperate not to like anything that wasn’t Daniel Testa-endorsed.

Lovetricity – some would call this the poor man’s Hypnotica, but I call it an equally catchy dance song that hasn’t got a chance of beating Hypnotica.

Now, who is actually going to score their way to Scandinavia? Based on (mostly) non-biased calculations, I predict one of Hypnotica, One Last Ride, Take Me, Let The Sunshine In, Brand New Day and Coming Home. I didn’t mention Sophie Debattista’s or Davinia’s songs earlier, but they sound to me like they have a shot. Also JESC alumni, Sophie’s participated in MESC before, but she’s got a better song this time. Davinia, on the other hand, came 3rd last year with an amazing song, and hasn’t come up to her own standard with this one in my opinion. But she’s another favourite, so I can’t discount her.

I believe Malta will end up sending something decent, wherever the votes go. What do you think? Who’s going to succeed the singing doctor that was Gianluca?

Everyone’s (I may be generalising on that one) favourite NF continues this week, having traveled from Malmö to Linköping. There are big guns and intriguing unknowns (to me, at least) in this second semi, including Sanna Nielsen, who should get some kind of Melfest lifetime achievement award, and Swedish X Factor finalists J.E.M, who are made up of a girl, a guy, and another girl who looks like Moran Mazor. Here’s the rolecall: 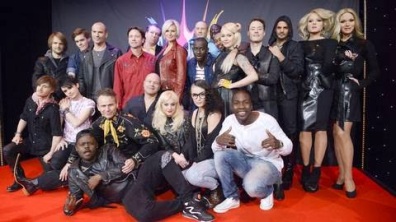 It’s largely a group affair this week, with only three acts flying solo.

You can listen to all eight here.

I had a feeling this semi was going to be better than the last, so I couldn’t wait to hear the songs. Now that I have, I will say it’s definitely more consistent than the last – there’s nothing worse than average in there. Here are the songs I rate most.

Efter Solsken – Panetoz didn’t disappoint me, coming up with pretty much bang on what I expected of them. That, by the way, was effortless, fun rap-pop with a tropical tinge that makes me feel like I’m partying it up in Barbados or the like.

I Am Somebody – I don’t know how to describe this exactly; nor am I sure whether the two women in this group are actually women (not that it matters). It’s electro rock-ish, moody, atmospheric, and catchy, which automatically makes it a good song in my mind.

Undo – Could this be the one that gets Sanna to the ESC? I’m not sure, but it’s my favourite song of the semi. It’s predictable in the way it develops, but so pretty I don’t care. I love the lyrics. An A-grade vocal will be needed to elevate, but I think she can deliver.

När Änglarna Går Hem – Martin’s hairstyle isn’t the only thing that’s changed since he represented Sweden in ’05. This song is nothing like Las Vegas, which is a good or bad thing depending on how you felt about that. I liked Las Vegas, but I rather like this too, and I’m enjoying hearing him sing in Swedish.

As for who’ll actually advance, I’m thinking it’s Sanna and The Refreshments to the final tonight, with Little Great Things and Martin going through to Andra Chansen. Sanna is a force to be reckoned with in present company, and if she didn’t go straight through it would be a shock. The Refreshments aren’t my cup of tea, but they’re a Swedish institution, and every time a song with a hint of rockabilly competes in Melodifestivalen, it tends to go somewhere. Little Great Things and Martin just give off an AC vibe – though I may be hoping to be wrong about them if it means Panetoz takes one of their spots.

I was 50% right about semi 1 (who saw Ellen Benediktson coming?) so don’t be surprised if this prediction pans out completely wrong. Make yours down below, or, if you’re reading this after the fact, let me know what you think of the results!

There always is. Azerbaijan and Belgium will have their own bits and bobs going on Sunday night, but because they are in super-early stages, let’s put them aside and focus on tonight.

In addition to MESC and Melfest, you can also tune in to:

You’re spoilt for choice, really. Once again, I’ll be sleeping through the action, saving my energy for the Melodifestivalen final, so whatever you watch, enjoy it a little extra on my behalf.

I’ll see you on the other side of Saturday, where I’m sure there’ll be plenty to talk about.

2 Responses to “Super Saturday 2.0: MESC, Melfest, and a little Sochi on the side”