I may be slightly obsessed with Ukraine’s last entry, but I honestly love Mika’s costume and want it for my own wardrobe (although I’m not sure where I’d wear it. At the supermarket, perhaps?) – unlike that of her sand-drawing companion Kseniya, who was apparently going for the ‘Bride of Dracula’ look. I love nude shades, feathers and mullet dresses, so when all three combined in this outfit I was never going to turn my nose up. Especially when the feathers were used for shoulder pads. Sartorial genius. 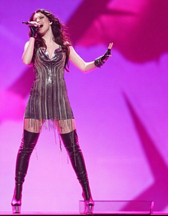 I never thought I’d praise someone for wearing Perspex-platformed, thigh-high stripper boots, but here we are. Having said that it was the mini-dress manufactured (presumably) from Maja’s mother’s old fry pan that earned her the #2 position. How she managed to sit down in the green room without causing herself serious injury, I’ll never understand.

Before I say anything else, let me just mention that no, the backing vocalist to Nina’s left is not pregnant. The ability for the ladies’ 60s shifts to make them appear withchild is the only downside to them I can think of, because the other 99% of the time they are just too cute: retro printed perfection, with Nina standing out just the right amount. 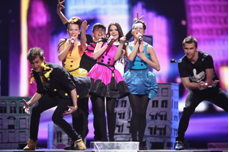 A year ago I despised Estonia’s choice of costume, mainly because I was in love with Getter’s national final dress and was heartbroken when it evidently didn’t make it into her suitcase for Düsseldorf. But a lot can change in 12 months (including trends – Peter Pan collars are totally in right now). Fun, cutesey, colourful and voluminous enough to conceal magic wands, handkerchiefs and probably a rabbit in a hat as well.

[This image refused to show up. If you need a refresher, you’ll have to Google. Apologies!]

These were voted the worst costumes of 2011 in the annual Barbara Dex Awards, but I completely disagree. I mean, sure, I haven’t seen that much quilled ribbon since the International Card-Making Convention, but you have to admit that anyone who’d staple the stuff to a black bin liner and wear it in front of millions deserves a virtual pat on the back. Striking and appropriate.

The mullet dress strikes again, only this time it’s not alone. The Slovakian twins could have worn snuggies on stage and still looked stunning, but they went for something more in keeping with the ESC dress code, and though it didn’t get them to the final, it got them a place on this list (not quite what they’d hoped for, but it’s something).

Not many people can carry off a jumpsuit, but Lena is the queen of simple black, and besides the fact that this outfit made her look freakishly long and thin in the body (if you’re reading this Lena, I only said that out of body envy) she worked it. Bonus points for the amazing shoes.

‘Russia: Making Azerbaijan’s use of lights in Safura’s costume back in Oslo look second-rate since 2011’. It’s a wordy and very specific tourist slogan, but it could work. It’s also a good thing Russia made the final last year, because if they hadn’t, we never would have gotten to see the magic A-L-E-X, which for some reason was ditched for the semi in favour of plain ol’ lights. Leather jackets have never been so awesome (or likely to burst into flames).

It’s not just hair that this Irish twosome take to new heights; shoulder pads too became victims in their quest for ultimate volume in Germany. Jedward may have looked like they skinned Dorothy’s ruby slippers in order to achieve such shiny redness, but it was worth it. Top this in Baku, boys!

There are two main reasons why I loved Dana’s dress. Firstly, it was chosen by the public – anyone who cared had the chance to go online and vote for their favourite Gaultier creation, and this flappy green arrangement proved the most popular (BTW, I was one of those who did care). Secondly, it took me back to my pre-school days of paper weaving, which is always a fun thing to reminisce about (although not as much as making jellyfish out of polystyrene cups and cellophane).

EBJ extras…Don’t think I’ve forgotten about the worst outfits of 2011:

Armenia – taking the boxing theme a little too far for my liking.

The UK – blue suits for Blue = not so good an idea.

Croatia – not one, not two, but three hideous outfits.

Moldova – what was the deal with those “hats”?

What do you think? Who got it right and who got it oh-so-wrong when it came to the fashion of 2011?

6 Responses to “Düsseldorf in Rewind: My top 10 costumes of the contest”