My favourite national finalist: This one

The best bits: I think I would marry this song if I could. In my adoring eyes, it has everything: one of the catchiest choruses of 2011; ethnic and modern influences; the right balance of fun and seriousness; the ability to work well live and on disc; AND it incorporates the use of a megaphone – something I often look for in a Eurovision song but rarely find.

The other bits: I can’t help feeling that one of Vlatko’s pre-performance rituals is to down a gravel milkshake, if his slighty rough vocals are anything to go by. We’re talking stone-shredding material here! It does suit the song style, however.

I give the vocals: 7

My favourite national finalist: If I Could Do It All Again by Raquela

Reminds me of: Glamorous by Fergie

The best bits: Glen’s definitely got the ‘aww’ factor going on – he is so ADORABLE! Or is that just me? Anyway, he’s one of my favourite personalities of Düsseldorf because of his enthusiasm and sense of fun, qualities which really showed through in the performance. Malta may not always send the most contemporary songs to the contest, but they always come prepared to give 110%.

The other bits: The song is stuck pretty much back in the Age of Padded Shoulders (the 1980s) and that just doesn’t cut it in modern Eurovision, as proven by Dana’s similar failure to qualify – though Glen was actually only oooonnnnne point away from making it.

I give the vocals: 8

My favourite lyric: “You pull me in your private side show”

The best bits: The boys who joined forces with the drum-beating nanna six years ago brought a similarly quirky-fun entry to Eurovision on their second go. It took me a while to warm to this, but once I did, I thought it equally as good as their 2005 song. I particularly like its clever lyrics and variety.

The other bits: I’m still nonplussed as to the relevance of the monocle. I mean, if this was called So Lucky To Own A Monocle, I’d understand. But it’s not…still, it did serve to  increase the forget-me-not level for Moldova.

My favourite national finalist: This one

My favourite lyric: “And we’ll find the freedom you left behind”

The best bits: The best entry from the Netherlands since about 2004 didn’t manage to qualify, but it certainly advanced its way into my heart (sorry). Sure, it’s not the most exciting song in the world, but sometime you fancy vanilla ice-cream even more than peanut butter crunch. It builds really nicely into a chorus you can both sing along, and wave your arms in the air to.

The other bits: This song suffered in the transition from Dutch to English. The rewrite fits nicely, but I can’t get past the crowd of clichés and weather analogies.

I give the performance: 6

Points for the Netherlands: 8

My favourite national finalist: Not That Easy by Åste & Rikke

Gimmick: Swahili in the ESC

The best bits: Norway can officially join Macedonia in the exclusive Catchy Chorus Club, although I think they may be the president rather than the secretary. What I love most about this entry is how happy it is. I’d like to see someone listen to it without breaking into song and/or dance, Glee style! Personally, I can’t resist doing the little arm-arm-hair flick-elbow along with the effervescent Stella.

The other bits: Repeat after me: this is repetitive!

I give the vocals: 7 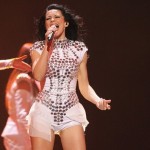 Reminds me of: It’s All About You by Juliana Pasha

The best bits: On a scale of 1 to 10, I’d rate Poland’s song of 2010 at about 2. This, on the other hand, is off the scale in comparison! It’s a cracking song, whether you take into account its failure to qualify or not. I feel sorry for the country – they made a real effort here with the song and performance, but they just can’t get the votes! Or perhaps the right draw…still, Jestem was a lovely opener for the first semi.

The other bits: I still think modeling the stage show after the video clip (costumes included) would have served Poland better, giving them more of a sultry Slovenia vibe rather than a demure Swiss one, which didn’t seem to fit the song.

I give the vocals: 6

I give the performance: 7

The best bits: Guilty pleasure alert! I don’t know how I can enjoy listening to a relatively tuneless, extremely repetitive protest song, but gosh darn it, I do. Like Cyprus and a few other countries, Portugal saved the 56th contest from being completely lacking in national musical identity. And like Macedonia, saved it from being a megaphone-free contest!

The other bits: Perhaps they could have taken that one step further and dressed in some sort of national costume, rather than their parents’ 70s throwbacks.

I give the vocals: 6

I give the performance: 5

My favourite national finalist: Bang Bang by Mihai Alexandru/One By One by Adi Cristescu

Reminds me of: Love Song by Sara Bareilles

The best bits: It’s a nice, smiley, life-affirming song with an interlude for us all to clap in, and some very fetching pinstriped pants. The man wearing said pants isn’t too bad to look at, either.

The other bits: I think this is one of Romania’s blandest entries. They don’t seem to be capable of producing a bad one, but at least a bad one gives us fans something to talk about. Despite the key change, Change doesn’t change that much from start to end.

I give the performance: 8

Gimmick: From the man who brought us Gaga, RedOne

The best bits:Russia threw pretty much everything at this – backflips, light-up leather jackets, podiums, choreography…I reckon I also saw a kitchen sink in there somewhere. And why shouldn’t they? I thoroughly enjoyed their performance, although my favourite part is found in the song itself, when the tacked-on dramatic Russian opening gives way to thumping, characteristically RedOne beats.

The other bits: In the semi final, the Australian commentators pointed out that Alexey, or Alex, or Clothilde (whatever name he’s going by these days) totes failed at his backflip. What I want to know is, did he really? Because if nothing had been said, I’d never have noticed. I mean, I thought when you did a backflip you were supposed to dislocate your collarbone.

I give the performance: 10