The fun-filled days of adding artists to our ‘Destination: Vienna’ wishlists may be over – but that just means it’s time to start speculating which European music sensations might grace Stockholm with their presence. Or, more accurately, making it very clear which of our personal favourite acts from the continent simply MUST represent their country in Sweden, OR ELSE.

For me, profiling a potential Eurovision rep is basically an excuse to ramble on about an artist I adore for an exceedingly lengthy amount of screen space…and in case you hadn’t guessed, that’s what I’ll be doing today. Don’t say I didn’t warn you.

Way back in the lead-up to Eurovision 2015, I was hoping for Finland’s participant to be Robin Packalen, and for the UK to select The Saturdays. Sadly, neither of those wishes came true. But I’ve picked myself up, dusted myself off and decided to angle for another of my favourite artists to aim for Eurovision 2016, via an article full of flattery. And I couldn’t start this season’s so-called suggestion box with any other nation but our host, Sweden!

Given their recent run of results, I don’t think Sweden really need my help in order to choose a great entry, but they’re getting it anyway. My ideal pick for the Land of Loreen is an artist I’ve been fangirling over for years, and someone who has actually attempted to represent Sweden in the past. I think he’d do a damn good job of it if a second attempt became a successful one – so, if he’s willing, can I/we please have… 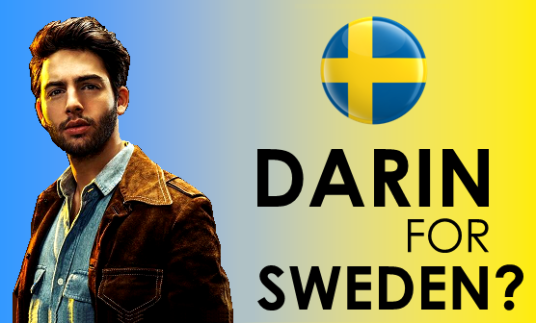 Darin Zanyar was born in Stockholm, destination of Eurovision 2016 (that’s got be some kind of sign), twenty-eight years ago – and for eleven of those years, he’s been one of Sweden’s biggest, brightest and best-selling artists. He’s also spent a heap of that time doing double duty as a singer and a songwriter, penning tracks for himself and for a myriad of other musos.

You might not have predicted such a future for him if you’d tuned into Sweden’s first series of Idol in 2004, and witnessed the gangly, softly-spoken 17-year-old audition for the judges with an N*SYNC song (which totally gets my tick of approval).

But, after destroying his competition week after week (competition that included future ESC champ Loreen) Darin became the true winner of Idol ’04…by finishing second. Losing to man who nobody remembers (Daniel Lindström, for the record) turned out to be the launching pad for one heck of a career. It began with a signature on a BMG recording contract shortly after Idol ended, then continued with the release of Darin’s first single in early 2005: ‘Money For Nothing’. The song was co-written by Swedish superstar Robyn, as well as Danish Remee (host of Junior Eurovision 2003 and co-writer of multiple ESC entries, including Anti Social Media’s ‘The Way You Are’) and it earned Darin his first-ever #1 single and platinum certification.

His debut album The Anthem followed, also topping the charts in his homeland – and the trend continued with his second, self-titled album, also released in 2005 (he wasn’t a stereotypical lazy teenager, that’s for sure). Darin spawned three top ten hits, including the #1 ‘Step Up’.

Album number three, 2006’s Break The News, followed suit, but fourth album Flashback was Darin’s poorest-performing release, failing to climb higher then tenth on the Swedish charts. It did, however, feature another #1 single in ‘Breathing Your Love’, a duet with American singer Kat DeLuna.

After appearing as a Melodifestivalen interval act in 2009, Darin made the decision that many well-known Swedish acts had made before him, and opted to enter the comp himself in 2010. Performing one of my all-time favourite songs, ‘You’re Out Of My Life’, he progressed direkt til Globen, eventually finishing fourth in a strong final. 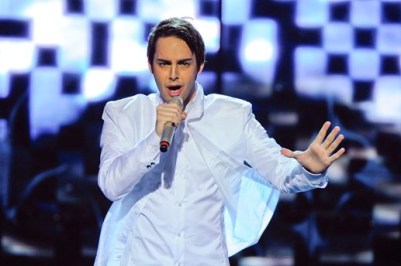 After Darin’s Melfest participation, he became known as ‘The Lord of the Wind Machine’.

Despite not making it all the way to Eurovision, he bounced back with another #1 album later that year: Lovekiller, which featured his Melfest entry, a (love)killer title track, and his hugely successful cover of Coldplay’s ‘Viva La Vida’. Darin co-wrote eight of the ten songs on this album, including ‘Can’t Stop Love’, written especially for the wedding of Sweden’s Princess Victoria. In 2011, he also co-wrote the winning single of Idol’s Amanda Fondell (who would go on to participate in Melodifestivalen herself).

In 2012, Darin appeared on reality show Så Mycket Bättre (So Much Better), tasked with covering the hits of a bunch of fellow Swedish musicians – and to cut a long story short, he nailed his assignment every week. The following year, he unveiled his sixth studio album and fifth #1 album in total, Exit; and appeared on the Eurovision stage during Malmö’s second semi final, alongside the amazing Agnes. There, he performed ‘Nobody Knows’ – shockingly, another #1 single – and ‘So Yours’. As I cried with happiness.

Fast forward to 2015, and there’s another Darin album on the horizon – but it’s not in the usual English-language, R&B/dance-pop mould. Having made the switch to Swedish and adopted a folksy flavour that fits him pretty well, he’ll release Fjärilar I Magen (Butterflies in the Stomach) in September. At this point, it’s already produced two massive hits in ‘Ta Mig Tillbaka’ and ‘Juliet’. It seems there’s no slowing Darin down, and no pigeonholing him when it comes to the type of artist he is, either. I accept that his music may not be everyone’s plate of IKEA meatballs, but I for one am counting down the days to the drop of album no. 7.

That depends on the time period you’re talking about. Early-days Darin was a record company’s dream – young, inexperienced, and therefore profitable putty in their hands. Seeing as he’d taken on N*SYNC for his Idol audition, he was shaped into a one-man boy band, sound-wise. Poppy melodies with an R&B edge and emotive ballads were once the bulk of his repertoire. As time went on, record company moves were made and experience in the music industry grew, and Darin settled on an arena pop/dance pop feel for his albums. Lovekiller was all about big choruses and layers of instrumentation, whereas Exit‘s focus was slickly-produced club tracks.

These days, as I mentioned before, Darin’s taken a completely new direction with his sound. Now writing songs that are heavily influenced by folk music, he’s stumbled upon an authenticity that works very well for him. As much as I love everything he’s produced in the past, I have to admit that his latest few singles have more substance, and tell more of a tale, than any that came before them. 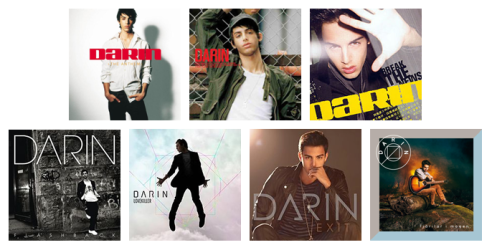 ‘Money For Nothing’ It’s not a musical masterpiece, but you’d hardly expect that from a seventeen-year-old’s first single. What is it, then? So 2005, and so much fun.

‘You’re Out Of My Life’ It couldn’t win in a top-notch edition of Melodifestivalen, but this beautifully-crafted ballad did win my heart FOR LYF.

‘Lovekiller’ Neither power nor passion is lacking in this not-so-cheery number. The chorus hits hard.

‘Astrologen’ A Så Mycket Bättre cover of a Magnus Uggla track, this atmospheric reworking is gorgeous. I genuinely prefer it to the original (sorry, Magnus).

‘Nobody Knows’ Well, that’s not true…we all know if we were watching Eurovision 2013’s second semi. Anyway, this is a top-notch dance anthem with a super-energetic tempo.

‘Ta Mig Tillbaka’ Simple and sentimental, this has been a big hit for Darin in 2015, suggesting that many of us can identify with wanting to go back in time every now and then *sniff*.

If they stopped partying for a second in the wake of their Eurovision 2015 win, Sweden may have offered their condolences to host country Austria on their worst-possible result – all the while expecting a different outcome for themselves when they take over hosting duties next year. There’s no way SVT’s main man Christer Björkman will want to see Sweden on the bottom of the scoreboard, either on home ground or anywhere else. If Darin were to enter and win Melfest 2016, I have no doubt he’d put a smile on Christer’s dial by finishing in a galaxy far, far away from Nul Pointsville. Here’s why.

PS…Darin’s new album drops on September 25th. That’s conveniently after September 1st, after which any song publicly aired or published can theoretically enter the following year’s ESC. So do the right thing, Darin – take the best track from Fjärilar I Magen that hasn’t been released as a single pre-September, and enter Melfest with it!

Update…What I meant to say (having forgotten about the ‘no publishing/airing before Melfest itself’ rule SVT are fond of, until I was reminded in the comments) is do the right thing, Darin – bask in the success of your new album, and then write a brand new non-album single to enter Melfest with. Is that really too much too ask?

If you’re keen for further info on Mr. Zanyar (which is unlikely, since I’ve forced so much of it on you today that you probably never want to see or hear his name again for as long as you live); or if you just want to see photos of him gazing thoughtfully into the distance with the Swedish sun shining on his stubble, then there’s no shortage of places you can visit to get your fix.

Well, I’ve had my say. Return the favour?

Who do you want to see competing in Melodifestivalen next year? In the hope, of course, that they’ll go on to become Sweden’s 2016 host entrant?

15 Responses to “MY STOCKHOLM SUGGESTION BOX | Darin for Sweden”