Allow me to explain: it’s been over a fortnight since the first semi final of Eurovision 2015; over a week since the final; and three days since May came to an end (WHAT THE?!?!). That means it’s beyond time I did what everyone else has already done: look back on this year’s results. I’m going to pretend the lateness is intentional because I want to stand out from the crowd, when really it’s due to me being a slowpoke and taking this long to mould everything I want to say into something readable. You guys know by now that there’s waiting involved (for other people) in everything I do. It’s part of my charm…I hope.

At long last, though, I have performed a results analysis on all three nights of Viennese competition (feel free to applaud before reading any further). You won’t find a dissection of every single split and combined figure from all forty countries below – if you want the specifics, you can seek them out yourself here) – but you will find:

So, in the words of Eurovision groove master Guy Sebastian: let’s (oh) get on it, (ooh) get on it!

The ESC 2015 final: A Twitter-friendly, Jaz-eye view on everything BUT the performances

‘Twitter-friendly’ = brief. I am capable of being short and sweet, you know.

Having said that, it would take at least two or three Tweets to make all of this info public.

Monika and Vaidas, hoping they’ll be out of their body casts in time to perform at Eurovision. Spoiler alert: they were.

‘Straya’s say: A little look-see at the points from the land Down Under

Speaking of Eurovision strutting back to Scandinavia next year…with Australia-in-the-ESC-for-keeps advocate Christer Björkman in a position of power where the 61st contest is concerned, it’s becoming more and more likely that we Aussies will be invited back to the party. I’ll make my thoughts on this matter public when the time’s right. For now, let’s just have a nosy at Australia’s debut grand final votes.

The Aussie points were presented by our beloved newsreader Lee Lin Chin (can’t help wishing it’d been me though). Lee Lin may not look like a badass (in fact, if Twitter is to be believed, she looks more like a certain extra-terrestrial, which I think is a very cruel and not at all amusing comparison) but I can assure you that her appearance is deceiving. She swept her sass to one side for her result-reading time, ever the professional when she needs to be. Here are the points she revealed to Europe and beyond:

As it turned out, Australia’s combined result was in keeping with quite a few other countries’ results. Our top three – Sweden, Russia and Italy – matched the Belgian and Latvian top threes exactly. Romania, Spain, Israel and Portugal also deemed Måns, Polina and Il Volo worthy of top points, in one order or another.

In addition, we predicted the eventual top six, not including ourselves (obviously) and with Belgium and Latvia in the wrong places. I don’t think that’s an indication of our collective psychic prowess so much as an indication that a handful of countries were almost universally popular this year.

So that was the combined result. Now, let’s banana split it a bit.

Russia and Sweden were particularly popular with our jury, making it into all five members’ top threes. Italy, a little surprisingly, only featured once (who knew Richard Wilkins had such good taste? Amiright, Aussies?) as did Cyprus and Norway. Belgium was ranked second twice.

Clearly, we were feeling some Serbia ljubav that the jurors – who ranked Bojana 9th in the final – were not. This could have something to do with our sizeable Serbian population, or it could be down to the bulk of early-morning voters being Eurovision fans easily sucked in by the oh-so-ESC anthem of self-love that is Beauty Never Lies. Or it could be neither. I didn’t vote for Serbia, so you’ll have to direct any whys to someone who did!

Reading the above as places 24, 25 and 26, you can see that Slovenia was ranked last three times. I’m somewhat taken aback by this. Could it be because Marjetka’s voice left a bad taste in multiple mouths (a.k.a. bad sound in their ears)? Or was there a widespread aversion to those damn headphones? My confused face is well and truly on. Interesting here is Belgium’s appearance, when Loïc was ranked in the top five of three other jurors. These bottom threes are a lot more varied than the top threes, with nine different countries appearing (as opposed to six appearing in the top threes).

Now you can see just how different the tastes of televoters and juries can be. Without any specific criteria to assess the songs/performances against, we ranked three countries that barely factored into the jury’s bottom three at all 24th, 25th and 26th. For further comparison, our jury ranked France 21st, Albania 23rd and Azerbaijan…6th. It doesn’t take a genius to determine which party Elnur was more appealing to (and that wasn’t the case in Australia alone).

So, all of the above was Australia’s first – but, as we’ll be forced to say until who knows when, perhaps not last – contribution to the final results. ‘What results?’ I hear you ask. ‘It’s been that long since the final actually happened that I can’t remember a thing about them!’. Well, fear not, because I’m about to refresh your memory.

Final-ly…an overview of the expected and ‘OMG!’ outcomes of Eurovision 2015’s last hurrah

This year’s voting sequence really was an epic one. The algorithm employed by the EBU to make the results as exciting as possible can only do so much when it has to be based on the jury votes. Often the addition of the televotes screws it up completely (i.e. it’s quite obvious who’s going to win when we’re only a quarter of the way through the announcements).

But this year, we were treated to a spectacle in which Russia took an early lead and held it with both hands for the entire first half of the sequence. Then, Sweden slowly but surely closed the gap, overtook Russia, then built up their own lead. By the time there were five or so countries left to announce their points, we knew Måns had Polina beat – but that’s far, far later than usual. The tension up to that point nearly killed me.

Knowing how the sequence ended will make future viewings much less taxing, and I intend to enjoy many of those in the coming months. How come? For the result that was in my favour for the first time. For Guy Sebastian personally thanking the artists from the countries that gave Australia high points (*melts*). For Måns’ priceless facial expression when it dawned on him that he’d won! I could go on, but instead I’ll jump into the promised scoreboard overview. 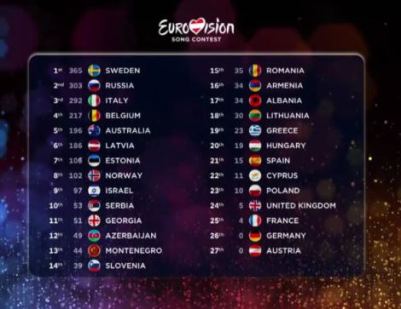 The top five (a.k.a. the five countries I predicted as potential winners, by some miracle):

The rest of the top ten:

And that, ladies and gents, was the final. Before I wrap up this momentous post, let’s whiz through the semi results as well.

A snapshot of the semi-final scoreboards, split and combined

Here are the combined results of semi final 1:

I predicted nine of the ten qualifiers (thinking Denmark would qualify in place of Serbia…d’oh!) but only predicted the correct finishing positions of Russia, Greece and Albania. How did you do?

Here are the combined results of semi final 2:

I also predicted nine out of ten qualifiers in this case (a personal best), under the impression that Iceland would qualify instead of Poland. Oops. Again, I managed to guess three finishing positions – Sweden’s, Malta’s and Ireland’s. Better luck next year to me, and to you if you couldn’t see the future so well either!

That’s all for today (as if it wasn’t enough for a lifetime) but rest assured that I have serious posting plans for the nest few months.

Up next will be my argument in favour of retaining the jury vote in the wake of Sweden’s “controversial” triumph. Then, you’ll have your chance to vote in the People’s Choice categories of the EBJ Eurovision Excellence Awards 2015 (woohoo?); the EBJEEs themselves will take place; I’ll reveal my top 10 performance highlights from Vienna and my picks for the national final runners-up who probably should have gone to Eurovision; and I’ll be publishing my exposé on all the lookalikes from the Class of ’15.

I hope you’ll drop by for some or all of these (hopefully) exciting events! In the meantime, let me know what you thought of this year’s voting sequence, results and winner. Please note that members of the Anti-Måns Brigade may be given the cold shoulder for a few days.

2 Responses to “From ‘Heroes’ to zeroes: Reviewing the Eurovision 2015 semi and final scoreboards, all the way from first to worst”