Welcome to Eurovision final Saturday, random person or regular reader (I think I have at least one of those…)!!! This day has the ability to be both the best and worst of the year, depending on just how much you love Eurovision. If you’re head over heels like me – and I’m going to assume you are – then you have to be prepared to be extremely excited one minute, and extremely depressed the next. The 60th contest is nearing its conclusion, and that brings with it Loreen-levels of euphoria as well as the kind of unshakeable sadness that Anita and Michele must have felt when they found out they were going to be lumped with a Ralph Siegel song. We feel you, guys.

This is where we are as I type this: 13 countries have fallen at the semi stage, and 27 remain in contention to succeed Conchita and give one of their broadcasters a very expensive coup. By the end of the evening, 26 of these participants will have lost (an unfortunate way to put it, perhaps, but technically true) and one will have won the opportunity to take the snazzy glass microphone home and display it on their mantelpiece (after Instagramming an “artistic” shot of it, of course). It’s time to take a punt at just which country and act that will be – and to take a guess at where all 26 losers will end up.

Before I get to that, it’s time for a quick (don’t take that too seriously coming from me) rundown of the second semi final, held two days ago and already reviewed by everyone else. What can I say? Being fashionably late is my trademark.

Semi final two was not vastly different to the first, except in song quality – I thought it was clearly the stronger one. Our three hosts were slightly less wooden, Conchita put them all to shame yet again with her easy charm and radiant glow (I think I love her a little bit), and the postcards continued to be precious. The 17 performances were what made the difference, so let’s focus on those.

These were the ten qualifiers, in performance order:

Who knew that all Latvia needed to succeed was a decent cactus impression?

Now, my thoughts on the seven non-qualfiers (also in performance order, because it just works, okay? Get off my back!):

In terms of predictions, I managed to call 9/10 again – Iceland being my downfall this time (the Nordics have not been kind to me). It turns out that there’s only enough room in the final for golden shoes, not golden feet (and extreme, off-key repetition). I failed to predict Poland as a qualifier, but I’m happy enough to see them go through.

How did you go with your predictions? Prepare to spill all as you venture on into my guesses for the outcome of the grand final – coming to you live from Vienna in a matter of hours!

It seems the theory that a producer-orchestrated running order will always result in the most entertaining and varied string of songs isn’t a reliable one – at least when the producers leave some of the draw to chance. With a heap of ballads pulling the second half out of the hat, ORF have had no choice but to compile a very down-tempo latter part of the proceedings. We’d better all choreograph some interpretive dance moves suitable for Hour of the Wolf, because after Golden Boy, Still In Love With You and Tonight Again, there’s more or less NOTHING to woki our popos to.

Slovenia should set a good tone for the show, however, and Israel will elevate the energy levels as we head into a long home stretch. If reports on the UK’s rehearsals are to be believed, it will be a positive to get their performance out of the way early on. Sweden can win from a reasonably early 10th slot if they’re meant to – Austria did it in 2014 from 11th. I hope discussion on Australia finally making its ESC debut in the 12th slot won’t overshadow the next country on stage, Belgium, who could be in store for their best result in a very long time.

Funky Germany’s scored a decent position between two ballads, but I suspect Ann Sophie will struggle anyway. Latvia, on the other hand, might benefit from being in a similar situation. Love Injected is nothing if not a standout song, and preceding Poland will probably suffer as a result. The final six songs will be hard to stay awake for, if I’m honest. Albania, I hope, will pep us all up enough so that we can be blown away by Italy, who will close the 2015 contest (I’m not 100% happy about them being last, but I can understand ORF’s reasoning).

Like I said and like we all know, the song that’s meant to win will win from any position, which means there’s still hope for Italy. But it doesn’t look like we’re going to have a repeat of 2003 here, when Turkey won after performing 4th (sorry, Estonia!). We might well have a repeat of 2003 in terms of voting though – back then, Turkey beat Belgium by 2 points, who in turn beat Russia by a single point. My fingers will be crossed for a nail-biter finish in that vein.

Highlights of the night: my expectations

Justifying myself in brief, Twitter-esque form, these are the countries I’ll be hanging out to see in action:

Let me know which acts you’re most looking forward to down below.

So, who’s going to take the trophy home?

I still believe this is an open year, despite one country in particular rising up the ranks and overtaking one of the long-standing bookies’ favourites. I don’t think we have a clear-cut champ just yet…but I reserve the right to change my mind once the votes start coming in and everyone rushes to book a hotel room in Sochi for May 2016.

No matter how biased it may seem, I cannot discount Australia as a potential winner – even based on novelty value alone. We have a good position in the first half, and Guy Sebastian is fronting a catchy, energetic pop song that will be remembered even if it’s just by association – like, ‘Hey! Let’s vote for the Australian song!’. The juries will give him a boost thanks to his impressive vocals. I don’t necessarily think Tonight Again deserves to win, but would I complain if it did? Um, no. I’d be screaming my head off, actually.

Italy outclassed all others in the OGAE vote, and while that doesn’t always signal impending success, it’s not devoid of clout. I wish Il Volo were performing prior to the point where viewer fatigue will set in, but I’m convinced they will make a big impression even as the last act on stage. Even if they f%#k up completely, I’m going to vote for them.

Russia has come out of nowhere to be a danger to the holy trinity of Sweden, Italy and Australia, who sat on top of the odds list for months. Polina is currently second-favourite to win, and though I will be disappointed if she does – not because it’s Russia, but because the song and performance don’t do much for me – I won’t be shocked. Russia won Eurovision seven years ago with a white-clad singer, and there’s a real chance they could do the same again. Polina definitely looks better in that dress than Dima Bilan would. 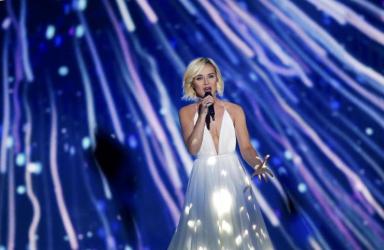 I can’t deny that Russia is on the white track to win.

My last pick for a probable winner has to be the favourite, Sweden. Måns is almost guaranteed to give Sweden another podium finish, but with Polina snapping at his heels (in a very ladylike manner) the landslide win a lot of us expected is no longer likely. I still believe he has a fighting chance, and I hope the nineteen or so votes I’ll be texting his way will contribute to that. LYCKA TILL SVERIGE!

What’s that? You also want a dark horse? Well, since I aim to please, here’s one: Belgium *insert dramatic soap opera music here*. Loïc, like Polina, has upset the apple cart of pre-contest favourites, having overtaken Australia. He’s sitting in fourth position behind Sweden, Russia and Italy, and this excites me greatly. A Belgian win is a lot to ask, but there is something masterful about the package of Rhythm Inside – the precision, the quirk, how cutting-edge it is – that speaks to me. This is memorable for all the right reasons, and I would LOVE Eurovision to have a winner that’s so out-of-the-stereotypical-box. But if it’s not to be, and Loïc ends up snugly in the top 10 or even the top 5, that will also be worth celebrating.

Top half VS bottom half of the table: Who’ll finish where?

If you’re up for predicting the entire final scoreboard from #1-#27, points included, I’m not going to stop you. I am going to stop myself, however. That could only end in disaster. Instead, I’ll have a stab at predicting which countries will finish on the left side of the scoreboard (i.e. at or close to the top of the table) and which countries won’t be so lucky, as Zdob şi Zdub would say.

No doubt they’ll be one or two countries that succeed against the odds, but I’ve given up on trying to figure out who they are. Given up or run out of time, one of the two.

On that note, like Nadav Guedj, I’ve gotta go, bye-bye. I’m off to a cinematic live screening of the final tonight/tomorrow morning, and I’m taking a gigantic flag cape with me (it’s an all-occasion kind of garment, but I thought it would do alright for this). I’m sorry to have rushed this post, but life is hectic at the moment, and to be honest, the occurrence of the ESC isn’t helping! But I’m more than happy to give it some priority time.

I’ll be back, as always, to dissect tonight’s results and discuss any fallout with you guys. In the meantime, hit me up with your predictions. Where is Eurovision headed in 2016? Who’s going to score jaw-droppingly well, and who’s going to fall flat at the final hurdle? Will we get the tense-as-heck voting sequence we’ve been waiting for? Tell me what you think in the comments.

Until Eurovision no. 60 comes to an end…