Yes, ladies and gents…we are now in the year after 2014 and before 2016, and I am scared, confused and excited, in that order. I didn’t get the chance to say auf wiedersehen to 2014 here on EBJ because I’m a disorganised slowpoke; nor did I get to say a big HAPPY NEW YEAR to those of you who inexplicably still read my ramblings even though they’re usually as up-to-date with current ESC-vents as Daria Kinzer was up-to-date with her fashion choices in Düsseldorf. I.e. not very. So…yeah, HAPPY NEW YEAR!!! I hope you had a fabulous NYE which involved getting your non-fan friends drunk enough so that they actually confessed to enjoying the Qele Qele remix you were playing on repeat. Unless you’re under the legal drinking age in your state/territory in which case I’m sure it was fruit punch all the way, woohoo.

Clearly I’ve been indulging in some “fruit punch” this evening, but let’s push that to one side and crack on with today’s posting. I’m starting 2015 with a wild and untamed ramble, covering multiple Eurovision and Junior Eurovision bases and mostly filled with info that you already know – just to prove that I’m staying the same old Jaz this year (only with a long-promised new-look blog on the horizon). Here’s a summary so you can choose to abandon ship now, or continue on into the murky yet glittery depths…

Once upon a time, way back in November – Junior Eurovision weekend, to be specific – I had the pleasure of attending a Eurovision gathering of the club variety (a.k.a. a Euroclub…duh) right here in Perth, highlights of which included a) dancing on a stage with a mass of flag-draped revelers, belting out Fairytale word-for-word, and b) actually being encouraged to judge the fashion choices of others as a decision-maker in a Best Dressed comp.

I must admit though, my absolute highlight of the evening was meeting the boys from Terminal Three – Fraser, Matt and Jason – who have turned their respective ESC obsessions into a schlager-ific Youtube channel. Hashtag Aussie Eurofans are the best Eurofans (in our own minds). In amongst the countdowns, news flashes and other awesomeness of the T3 channel are interviews aplenty, and recently I was lucky enough to be the subject of one!

As much as it pains me to say this, as I am the Queen of Awkward when a camera’s on me (and at most other times) you can watch me chat one-on-one with Fraser below re: the origins of this li’l ole blog, Melodifestivalen, and my undying love for Ott Lepland. Please keep in mind that I’m much funnier, personable and attractive in real life.

I’d like to thank Terminal Three for wanting to interview me in the first place, then taking the time to do it. You can check out everything they have to offer on Youtube, and/or connect with them on Facebook and Twitter. Don’t deprive yourself of such Eurovisiony goodness!

Divide and (not quite) conquer: The JESC split results, revealed

It took some time, but the EBU did finally release the split scores of November’s Junior Eurovision this week. That’s a belated Xmas gift to all of us who now get to spend weeks dissecting the differences, and discussing how irritating it must be to Armenia to find that they were ranked second with both the juries and televoters, but ended up in third place (that’s just how the system works at this point in time, Betty. Besides, bronze ain’t a substance to be sneezed at). Here’s my dinky little version of the results, with a much more professional one feat. all the figures available here.

Firstly, congratulations to both Bulgaria and Italy for winning their respective halves of the vote. I’d consider that almost as good as a legit victory for Bulgaria, whose previous JESC participations have ended very differently. As for Italy, it’s just further proof that they’ll always have power over the juries because they are classy as f%#k. Unlike myself.

Vincenzo didn’t manage to wow the folks at home in the same way he wowed the industry pros. I blame the fact that I wasn’t on European soil and was therefore unable to vote for him until my fingers fell off. I can understand viewers being spellbound by Bulgaria instead, considering a) how magnificent Planet of the Children is and b) how ridiculously adorable Krisia is. Oh, and c) how talented Hasan and Ibrahim are at tickling the ivories.

The jury was more impressed by Federica’s age-defying operatic pipes, ranking her third versus the televoters’ seventh. They also appreciated Sophia Patsalides’ flawless performance (and Cons + chiffon combo) considerably more than the televoters, which is surprising. As is Sweden’s situation – 15th with the fans and 11th with the juries, in spite of the staging and costuming being stronger than Julia’s vocals. I can only assume there were some jury members just as partial to the glittery fringe-fest as myself.

Sympho-Nick may be scratching their heads right now as they attempt to comprehend their 3rd/12th results. Maybe all the jury members went on a group trip to see Frozen at the movies, hated it, and Ukraine’s performance brought back bad memories? Or were the fans won over by the girls’ vocal transformation since the Ukrainian final?

Still, only four countries were seen as equals by jury members and televoters alike: Armenia (2nd), Belarus (8th), Georgia (10th) and Croatia (16th). I guess poor Josie made a breathlessly off-key impression on everyone, whilst nobody could resist Betty’s sunny charms and bendy backup dancers. Fair call.

What do you think of the results? Are you flabbergasted that Krisia & Co topped the televote or would you have seen that coming even with Donny Montell’s crystal blindfold glued to your face? What is up with that disparity between how the televoters and juries saw Ukraine? And how much would you bet on my asking inane questions like these at the end of every section of every post I put up in 2015? Let me know below.

WTF am I talking about, I hear you ask? Sending a couple of ex-JESC contestants to carry the hopes of a nation on their teenaged shoulders, that’s what. While Russia went with a pair of twins who managed to win Junior Eurovision back in the day, San Marino have selected two much less successful teens from different wombs to represent them, neither of whom is Valentina Monetta (obviously she’s not a teen, but it’s so shocking to not have her flying the Sammarinese flag I thought I’d clarify).

Ages combined, they’ll still be younger than most of their competitors in Austria.

Michele Perniola and Anita Simoncini are the sixteen-year-olds in question, as you’ll no doubt know since they were internally selected around the time man discovered fire (as always, I’m on to breaking news with all the speed of a comatose sloth). Both he and she failed somewhat unfairly in JESC in my opinion – Michele finishing 10th out of twelve last year in Kyiv, and Anita and her fellow Peppermints coming second last in Malta. Some might say that doesn’t bode well for the duo, but I disagree. Here’s why:

I’m not sure why I’m leaping to *insert genius couple name for Anita and Michele here* defence when they haven’t even been subjected to a barrage of hate from the rather opinionated Eurofans…yet. But if you were skeptical when you heard the announcement, why not wait until their entry is debuted and then have a good ol’ bitchfest? Or not. You never know, you might like it. At the very least, it can’t be more immature than The Social Network Song.

I use the word ‘awesome’ purely because it rhymes with ‘foursome’, as we won’t know how yay or nay these women are when it comes to hosting duties until the contest comes around. Mirjam Wiechselbraun, Alice Tumler and Arabella Kiesbauer (say that three times fast) are ORF’s choice to head up the proceedings of the 60th contest, with reigning champ and generally exquisite creature Conchita Wurst taking on the role of Green Room host. 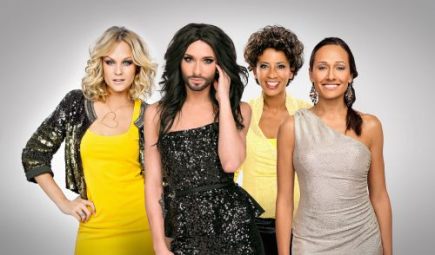 This is as close as we’ll ever get to the Spice Girls hosting Eurovision.

Now, I’m all about girl power, but as someone who believes no more than two people should host Eurovision at any given time, I’ve got to label this as excessive. How many people do you need to engage in cheesy scripted banter sporadically over seven hours, really? Sheesh. I am looking forward to seeing Conchita in action though, as I think she’ll make the often awkward interviews with contestants seem effortless – and no doubt she’ll be wearing something amazing when doing so.

We’ve reached out first milestone in terms of ranking the Class of Vienna, with five entries now decided (more or less). Until we meet again at ten, here’s how I’d stack them up.

Feel free to share your Viennese top 5 below. Just keep the swearing to a minimum, won’t you?

I’m going to wrap things up now, before you lose the will to live. The thought of the month ahead might pep you up, as there’s more national final action than there might seem at first glance. We’ve got prelims and semis from Lithuania, Cyprus, Hungary and Iceland throughout January, as well as the Georgian final on Valentine’s Day and the Swiss final on the 31st. That’s just the start of the wonderful craziness to come as we barrel down the road towards Eurovision no. 60. I’ll be reviewing and predicting as many NFs as I can, in amongst the top 10s, playlists, country profiles and other random stuff that will make 2015 basically the same as any other year as far as this blog’s concerned. I hope you’ll join me on the ride!