Hello there! Welcome to this third, final, and long-awaited (in my head, anyway) installment of Jaz’s JESC 2014 ranked reviews. Yes, it’s time. After some very dramatic bouts of indecision, I’ve finalised my pre-contest top five, and I’m ready to reveal why they made the cut and how they stack up against each other, in my opinion.

As you know, rehearsals are underway in Malta, where a bunch of people I know are currently having the time of their lives taking selfies with the contestants and whatnot. I’m not jealous at all. Who would actually want to BE there, experiencing Junior Eurovision first-hand? No thanks…said NO ONE EVER. Anyway, while those people are doing that, I’m stuck on the other side of the world avoiding the temptation of watching said rehearsals, which isn’t too hard for me as I love a good surprise. But just as a disclaimer: if somewhere in the following reviews, I’ve praised someone on their singing abilities who’s turned out to be rubbish, give me a break!

In turn, I’ll give you a break from my ramblings by letting you check out my top five. Stick around ‘til the end if you want to see my full rankings, #1-#16.

#5
ARMENIA
People of the Sun by Betty

Sounds like: the earworm of the year…people of the suuun, we’re always having fuuun…

What I think: Not many people would disagree that Armenia is a constant JESC contender. Their enthusiasm for the contest is reflected in the quality of their entries year after year, with the roll call of their results being über impressive. Obviously, I believe that trend of terrifc-ness is continuing into 2014 – only this time, the song’s great AND the artist can hold a tune (sorry Monika of Choco-Fabric fame, but my ears are still recovering from your off-key yelling session). I’d describe People of the Sun as simple but effective, and the kind of irresistible ethno-pop that won JESC for Armenia three years ago. Yep, I’m getting the vibes from this one (as did Kiddo the predicting rabbit, if you have any clue what I’m talking about) for a variety of reasons: e.g. because I’m a huge fan of it; and because it’s going to stand out as the only straightforward ethno-pop song in the lineup, particularly when sandwiched between Italy and Russia. It might be missing that last little spark that would make it a winner, but that depends on the visuals in the staging. No doubt it will revive anyone in the audience who’s not a ballad fan and falls asleep while Vincenzo’s doing his thing, ‘cause this is one heck of a happy anthem. I don’t even mind the questionable English lyrics in the chorus, since they make the song easier to sing along to for those of us still working on our Armenian (“still working” = “the only Armenian words I know are from Eurovision songs”) and stop the three minutes from being too repetitive. Pardon me for cussing with regards to Junior Eurovision, but this is bloody good.

The verdict: Armenia, you’ve done it again – and that gets you douze points!

JESC chances: I did say this about the Netherlands last year, and that didn’t pan out…but I’m having trouble seeing this outside of the top five. It’s definitely a potential winner IMO.

#4
BULGARIA
Planet of the Children by Krisia, Hasan & Ibrahim

What I think: In a competition full of ballads, there’s a good chance one will win on Saturday night (though I think we’re due an up-tempo winner at this point). Of the ballads most likely to top the scoreboard, Bulgaria’s is the one that would make me do a victory dance. There’s something special about this song, and not just because most songs titled along the lines of Planet of the Children are cutesy message songs that make you want to puke. While this is a message song in a sense, it delivers its message in such a classy and powerful way that I’m willing to receive it and accept it with thanks. Such a big song handled so effortlessly by a tiny, adorable human like Krisia (I’m not one to fawn over kids as a rule, but she is SO SWEET!) is captivating, as is the simple but beautiful melody, and the soaring choruses, and the sophisticated instrumental breakdown courtesy of Hasan and Ibrahim…the list goes on. I’m sorry if I’m gushing, but a song so magic deserves praise. From what I hear of Bulgaria’s first rehearsals, they’re going with the black/white piano gimmick from the preview video (insert a big tick of approval here), Krisia’s sounding excellent and the boys are supporting her perfectly. Could all of that add up to Bulgaria’s first ever victory in a Eurovision event? I’m terrible at maths, but I reckon it could.

The verdict: Staged suitably, this will be a stunner. I love it to douze points and back.

JESC chances: It has an early draw, so later ballads could push it out of contention. I still think it shouldn’t be lower than the halfway mark.

What I think: Once upon a time, three Ukrainian girls in blue nightgowns won a national final with a song that made me go ‘OH DEAR GOD, UKRAINE! WHAT HAVE YOU DONE?!?’. Yes, I’m referring to Sympho-Nick (what a subtle reference it was…) and yes, the first time I heard Pryyde Vesna, I thought Ukraine had royally screwed up their chances of repeating last year’s JESC success. Judging by the hate this entry is still getting, that may be true, but I have fallen head-over-heels for it since that initial listen – and I want this trio to kick butt in Malta and prove the haters wrong. If their vocals have been whipped into shape since the NF, there’s a chance for that to happen. I think it was the lack of harmonisation, in a song that needs it badly, that repelled me at first, because the studio version kinda takes my breath away. There’s so much beauty/drama in it, it’s like the Miss Universe pageant in song form. Somehow, the verses and pre-choruses are stronger than the chorus itself, which is a slight letdown after all of that build, but I like the chorus nonetheless. Each section of this song is unique and I appreciate that. The whole thing’s got this fantastical air to it that does hark back to Zlata’s Gravity (and basically her entire interval performance in Kyiv) but at the same time, is unlike anything I’ve heard before, and definitely unlike any of Ukraine’s fifteen rivals. I do not want to see this near the bottom of the scoreboard.

JESC chances: This is a tough one. I don’t think they’ll do as well as Sofia did, but I’m foreseeing a solid 5th-9th finish.

Sounds like: more or less what I expected from Italy

What I think: What I expected, in case you were wondering, was pure class and elegance. No amount of gold underwear-flashing from Emma Marrone can change the level of sophistication Italy brings to anything associated with Eurovision (and pretty much everything else) and as surprised as I was to discover such a country putting their hand up for JESC, I wasn’t at all surprised by their sending a beautiful ballad like this. I know, I know, everyone else hates it, and you must think I’ve gone insane to feel so differently…but as far as I’m concerned, Italy can do no wrong. I just love this. After the subtlety of the first verse – which is spellbinding and just begs for a spotlight – things ramp up and it’s all about Vincenzo’s ridic vocals, and boy, does the rest of the song show them off! If his voice isn’t at breaking point and he can sing the pants off the song when it counts, Italy’s debut will be an impressive one. I for one am really looking forward to witnessing it. Tu Primo is a song that could easily stand up in the San Remo Song Festival, and there’s always something special about a San Remo ballad. But, there’s no way of knowing how something like that will be received in Junior Eurovision. Sadly, I suspect Italy won’t be able to translate their Eurovision success (up until Copenhagen) into Junior triumph – call it ‘pulling an Azerbaijan’. Still, I’m hoping if I wave my VINCENZO NUMERO UNO!!! banner enthusiastically enough, it’ll help a little bit.

The verdict: I have so much amore for this. Douze points’ worth, in fact.

JESC chances: He’s the only boy bar the Bulgarian twins, so in that respect, Vincenzo will be memorable. But there are ballads aplenty in the field, and this one’s not getting a whole lotta love (except from me). With a heavy heart and a wish to be wrong, I predict around 10th-13th. 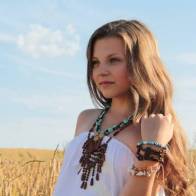 Sounds like: nothing else on offer in this year’s comp, and that’s what makes it so amazing.

What I think: Opening the show on Saturday will be Belarus’ own Pocahontas (I’m clearing out my entire wardrobe and copying hers from now on) and all I can say about that is, so much for saving the best ‘til last! Belarus are like Azerbaijan/possibly Italy in reverse – not so deft at adult Eurovision, but awesome when it comes to Junior. They were one of my favourites last year, and now they’re my absolute favourite, despite the fact that on paper, r & b/folk/ethno-pop sounds ridiculous. In reality, it’s been nailed by Nadezhda, and Uzari, the man behind one of my most-loved NF entries from a few years ago, Secret. I reckon they should forge a lifetime songwriting partnership. Sokal has the same mystique and ‘Made in Narnia’ feel to it that Secret has, only in a more up-tempo, ethnic package that’s so interesting you can’t ignore it. I love that it’s an interpretation of a fairytale, not just a 180-second string of nonsensical lyrics about stuff that a kid couldn’t possibly understand (not that I’m totally averse to that when the song’s catchy enough). Nadezha owns the song in a way you’d expect from someone who had such a big hand in writing it, but her confidence onstage is still admirable. Belarus = the total, gift-wrapped, feather-garnished package of the year in my eyes. There’s nothing I don’t love about the entry; nothing that doesn’t draw me in. I can’t wait to see it kick off the proceedings on the weekend, and my fingers will be crossed for the mesmerising effect to last until the voting window closes.

The verdict: Absolute trash from Belarus, as usual…in no way. Douze points, duh!

JESC chances: I don’t think it’s going to win, as much as I’d like it to. But it’s so unique it deserves a top five placing, and I think it can get it.

Aaaaaaaaaand voila! Sixteen down, none to go. Now allow me to introduce, for the first time, my complete ranking for 2014…at this precise moment.

If you’re in the mood to do some commenting, I’d love to see your top 16. And, as always, if you’ve got something to say about the reviews above, let me know below.  Have you sworn to never grace EBJ with your presence again after I ranked Italy so high, or do you have some Vincenzo love in you too? Is it an injustice that Krisia and the twins aren’t sitting pretty at #1? Whatever you’re thinking, get it out in the open. Just think of me as a Eurovision therapist – only instead of being paid to listen to your problems, I listen to your conflicting opinions (and rare agreements) for free.

I’ll be back in a few days’ time with a prediction-packed special re: JESC 2014 (what else?). If you enjoy extremely inaccurate guessing, you won’t want to miss it!
Until then,