Let me ask you a question. Do you remember Eurovision 2013?

I ask you this because, approximately a million days after the final, I’ve just managed to pull myself out of the post-contest funk and do a review, and I’m not sure it’s relevant anymore.

An ancient newspaper clipping to jog your memory.

That is, of course, a hilarious joke which exaggerates the fact that it is Wednesday and the final was on Saturday and I’m only just getting my behind into gear to write about it. But I figure, why should anyone have to get all of their thoughts about Malmö out ASAP? We should all be dissecting and discussing it for months! That’s the only good thing about Eurovision being over each year!

Hands up who wants me to stop using exclamation marks! Okay.

I am warning you now that I personally don’t intend on shutting up about Ye Olde Swedish Spectacular until something happens on the JESC front, and/or the 2014 ESC season begins. So here is one of many, many ramblings to come on the subject. These are my thoughts on the final, from top to bottom.

A few fascinating factoids about Eurovision 2013

– Spoiler alert (for those who have been hibernating under a rock). For the second time, Denmark won the contest in neighbouring Sweden, after the Olsen Brothers vocoded their way into first place back in 2000 in Stockholm. I wonder if this means Estonia will win next year, and Latvia the year after, and so on? Place your bets now, people.

– For the second year running, the winner was a solo female with an aversion to shoes. #justrealised

– The Malmö show proved that spending a little less of your pocket money doesn’t mean ending up with something substandard. The budget of this year’s contest paled in comparison to that of Baku. No disrespect to Azerbaijan, but Sweden did a lot with a little, which I like to call the Allen key mentality. 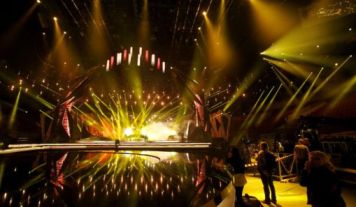 This looks pretty darn expensive to me.

– The show did break a record as being the edition with the greatest number of close-up hand shots in history. Well, I can assume that’s the case, because have you EVER seen so many GOSHDARN HAND SHOTS in your LIFE?

– There were 17 non-English language entries out of the 39 competing. 5 of those qualified to the final, and 3 were from Big Five countries. Of those 8, 3 made the top 10, with another just missing out.

France: I never saw a great result on the cards for France. And when they were chosen to open the show, all I could think was ‘Amandine is tres screwed.’ But my god, can the woman perform! She ripped into L’Enfer et Moi like it was a bag of hot chips and she hadn’t eaten for three days. She was sexy but not sleazy, very, very fierce, and above all taught us that the clichéd singers wear metallic fringe, while the classy ones wear leather fringe.

Moldova: I couldn’t wait to see Aliona in action again after the semi, and apart from one crack of the old voice, she did not disappoint. From the sound to the look to the choreography, Moldova brought it this year.

Belgium: For the first time in a long time, Belgium was in the final AND I was over the (Aliona) moon about it. Roberto looked pretty happy that Belgium was there too, and that made for an excellent performance. I have officially forgiven them for the Iris snoozefest.

Malta: Has anybody ever been as happy to be at Eurovision as Doctor Bezzina? His face must be aching from that smiling, but I’m sure he can prescribe himself something to ease it. 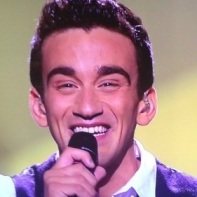 Sweden: The walking, talking cuteness that is Robin Hcqwernberg (just wanted to have a go at spelling it how you say it) finally made it…back to the Malmö Arena where his Melodifestivalen semi was held. But hey, it was a different stage, and he was wearing a different jacket. His was one of my favourite acts of the night, and to anyone who thinks he can’t sing, I point you to this three minutes and ask ‘are you freaking kidding me?’

Hungary: I don’t know if this was by accident or on purpose because of that laid back/apathetic vibe ByeAlex has about him, but his vocal was more solid on Saturday than it had been on Thursday, and that combined with the reaction from the audience and the quirky backdrop (and my endless love for the song) charmed my socks off. Not literally – it was a cold night – but still. I swooned.

Azerbaijan: Hold Me is without a doubt my  grower entry of le year. I’m really digging it now, but I won’t deny that the slow clap-worthy staging had a hand in it. Farid was basically as consistent as he had been in the semi, and I marveled once again at what was going on under and around him.

Someone’s never heard of thinking outside the box…

Norway: I loved everything about this performance. Though it was similar to the original from MGP, the subtle differences (i.e. the fact that someone took to Margaret’s dress with a bedazzler and some pinking shears) showed some effort.

Russia: This was not as slick as it was in the semi. Dina’s hair was limper, her vocal wasn’t as impressive, and those light-up balls were thrown into the audience a little too late. I’d be lying if I said I wasn’t pleased, since those tiny errors spelt N-O  W-I-N  F-O-R  T-H-E  R-U-S-S-I-A-N  C-H-E-E-S-E.

Germany: I was looking forward to Cascada in an über-big way, but something didn’t click. I’m not sure what it was – Natalie’s vocal was good, her outfit was much less trashy than that of Unser Song, the stairs were cool…but it just didn’t have the same impact as it did in the NF. I guess the editing of Glorious into an ESC-sized version with less build and drama could be to blame.

Romania: This is a lowlight strangely based on how good (albeit in a bizarre way) it was. I got a teensy bit scared that Romania could win, or at least make the top 10, and that the press would have an absolute field day mocking such a ‘typical’ Eurovision success. Also, none of the glassware in my house made it to Cezar’s final pose unshattered. I’m going to be sweeping it up for months.

Georgia: Watching this, keeping in mind the flood of tips for it to win, I couldn’t help feeling depressed. As much as I’m keen to see a Georgian contest, I really didn’t want it to happen with Running Scared 2.0 – a nice, Swedish-penned ballad sung by a male/female duo who were quite touchy-feely with each other and were showered in sparks (not love) as the clincher. I felt that Sophie & Nodi were more than competent, but kind of soulless on the night.

What about the other entertainment of the evening?

– The opening act combined a choir, half of ABBA, a bit of the Olympics and a dash of Junior Eurovision and the result was a testament to the different approach SVT took to this year’s contest. In other words, I hadn’t seen an artist parade before in my Eurovision lifetime bar the mini version, and that’s a part of JESC I’ve always loved. So that was good. Thanks, SVT.

– In the middle came another reprise of sorts from Loreen, who distracted us from her continuing lack of footwear by modeling extreme feathered shoulder pads/hanging from the ceiling/et cetera. It was just an average day on the job, basically.

– Petra’s Swedish Smörgåsbord had ‘Melodifestivalen’ written all over it, and it was glorious (can I use that word without being sued by Cascada?). I would pay to go and see an extended version. It was unfortunate that Carola exited so quickly and ungracefully, but at least we know she doesn’t mind making a fool of herself. 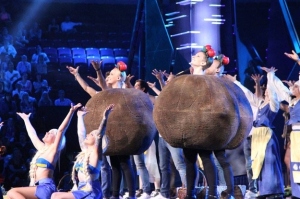 You can’t get meatballs this size at IKEA.

– Sarah Dawn Finer on the Eurovision (satellite) stage at last! This was the woman most of us wanted to host the show, and her performance was our consolation prize. I wonder where Lynda Woodruff was at while SDF was doing her thing? You know, I’m starting to wonder if they might be the same person… 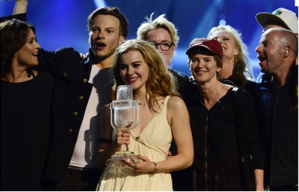 So the favourite turned out to be the favourite for a reason. Fair enough. Only Teardrops wasn’t my ideal winner, but it makes a worthy one, and I’m glad that 2014 will take us to Copenhagen (probably) rather than back to Baku so soon.

Unlike Running Scared, I would have been happy to see Hold Me win based on song and performance. That staging was pure genius. Yeah, yeah, Eurovision is a song contest…but don’t think the visuals have nothing to do with anything. Still, 2nd place is another excellent result for this country.

And Italy does it again, with class and minimalism (and a spiffy blue suit). In your face, haters. I do think this should have beaten Russia.

Places 8, 9 and 10 all make me happier than Gianluca on holiday at Disneyland, for different reasons. In Hungary’s case, it’s because a country that struggles to succeed sent a humble, native-language song that I adore to pieces, and was surprisingly rewarded for it. Doctors and philosophers = Eurovision triumph.

Now this was a shocker. After Roberto miraculously qualified (5th, no less) I expected Belgium to come undone in the final. But it seems enough ordinary folk and haughty jurors saw in his song what I do to get him a respectable score.

This isn’t a dreadful finish by any means, but as president of Team Robin, I was hoping for more. I actually think representing the host country worked in his favour – if he hadn’t been, I suspect he would have ended up lower. I still don’t think YOHIO would have done better.

I’m confused. I know I complained about the performance earlier, but Glorious still went off, and I would have at least expected a top 15 result for Germany. I blame the draw. Still, it might be time for Deutschland to revert back to the Unser Star format.

It’s Tooji all over again, but with less points and a much better vocal. I don’t get it. Why wasn’t the UK all over this?

So those are a few (…) of my musings on what went down last weekend. Like I said, 100 years ago at the beginning of this post, there will be more to come, including the handing out of my awards for Eurovision Excellence, and non-excellence. There will be a people’s choice award this year, so look out for that very soon. In the meantime…

Got some personal highs and lows of the 2013 finale? Let me know below!

9 Responses to “In the end, only teardrops…of happiness! My take on the Malmö finale”