May I extend to you a pinch and a punch for the first day of the month? I do so without any fear of retaliation, unlike in my school days when I used to dread any 1st for fear of being attacked by child-sized fists.

Anyway, it is April 1st, a.k.a. the day people feel really stupid when they fall for a hoax. Last year I fell for www.eurovision.tv’s epic joke, and I promised myself it wouldn’t happen again. So today, when I saw this ↓ 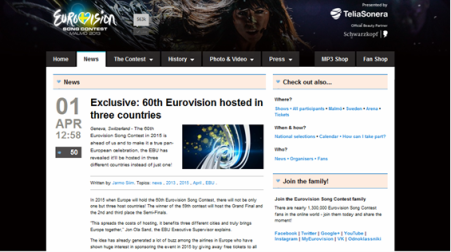 I had my wits about me and managed not to be fooled (Jaz: 1, some guy sitting in front of a computer screen: 0). I figured those of you who did fall for this or any other April Fool today would not want to be humiliated again, so for that reason my post today is not a joke (FYI: the real reason is that I just couldn’t think of a good one). But it is full of jokers. Eurovision has seen its fair share of novelty entries over the decades, and most of the media/non-fans take great pleasure in latching on to them and implying that the entire contest is made up of dancing pirates, singing vampires, and cyborgs going by the name of Sasha Son (what? His hand was on fire and he didn’t even flinch!). What day of the year could be more appropriate to discuss them on than this one? ‘None whatsoever’ would be the correct answer to that question. So, in the immortal words of PeR, here we go.

I feel like I can only speak with authority about more recent joke entries. Plus, there has been a lot over the years, and I’m sure you’ve got better things to do than try and understand what the heck I’m talking about all day thanks to the world’s longest blog installment. So the following compilation I’ve put together celebrates the not-so-serious songs from Stockholm 2000 onwards. I’d also like to say that these are what I define as joke or novelty entries, or at least entries that aren’t supposed to be 100% legit. You have the right to disagree, but we all have the right to our own opinion. With that little disclaimer out of the way, here’s a playlist of the entries that were supposed to make us laugh, and/or make a point, with those I actually enjoy (guiltily or not) highlighted for your convenience.

We Are The Winners by LT United (Lithuania 2006)

Some facts and figures about these jokers ↑

– 13 participated in a semi-final, but of those only 2 qualified to the final – Party For Everybody and Wolves of the Sea. As we all remember, the Russian grannies scored their way into 2nd place, but the pirates had to be satisfied with 12th place.

– 3 made the top 5: Party For Everybody, Dancing Lasha Tumbai  and Wadde Hadde Dudde Da? from the ever classy co-host of Eurovision in 2011, Stefan Raab. PFE and DLT are the most successful joke entries on the list.

– Weil Der Mensch Zählt and We Are The Winners both made the top 10, both ending up in 6th place. So they weren’t quite the winners after all.

– 3 of the songs were performed by men dressed as women; 2 by artists’ alter egos; and 1 by a hand-operated puppet (insert joke here about anyone you like, insinuating that I’m not referring to Dustin the Turkey).

– In 2010, the EBU established a Most Apathetic Performance award, to be given to any act from the previous 50+ years that put the least amount of energy possible into their three minutes. It was ultimately awarded to Ping Pong. (Okay, this may be a slight April Fool in that I made it up. Not that I would have fooled anyone, so that was pointless).

–  There has been 2 ESC entries sung in an imaginary language, which you might expect from a joke entry – and yet neither of those was in any way funny. One (Urban Trad’s Sanomi) was brilliant, and the other (Ishtar’s O Julissi) was beyond a joke.

– It seems like outlandish, themed dressing immediately sets off the joke alarm. If you watch some of these entries on mute, they look almost normal – think Patrick, LT United and Anmary. But there’s no mistaking the ‘yikes!’ factor of Verka, Stefan and Scooch, to name a few. My tip for making a costume guaranteed to not get you taken seriously? The shinier and matchy-matchier, the better. Extra points for wearing something on your head (a hat, a pineapple…it doesn’t matter).

I’m sorry for this rubbish April Fool’s Day post. If you have any ideas of how I could make up for it next year, for the sake of all that is rhinestone-encrusted TELL ME IMMEDIATELY! If not, why not let me know which joke entries are your favourites (if any) down below?

NEXT TIME: It’s time for a new series of posts, and they ain’t gonna be pretty! Coming up is the first round of EBJ Song Battles, which will pit the songs of 2012 against the 2013 offerings to see whether Baku or Malmö reigns superior. Then, it’s the best of the runner-ups from this year’s NF season, in review.