Hello again. It’s March, and another Super Saturday is upon us, but this time there’s a Super (ish) Sunday to go with it. This weekend, we have:

–  Israel’s version of the above

–  a Serbian semi and final

–  so many NFs, so little time, basically

That, combined with the fact that I’ve just gone back to university and am currently in way over my head, means there isn’t a second to spare for a wordy intro, so let’s crack on!

Entries of the week: my verdict

Five songs were released/chosen this week, and though I don’t want to give too much of my opinion away before my reviews, I feel compelled to inform you of my first impressions.

Croatia (Mižerja) – As a lover and learner of Croatian, I do appreciate a second consecutive year of native tongue from this country, especially after the train wreck that was Celebrate…ick. I also appreciate the traditional ethnicity of this entry, not to mention (even though I’m about to mention it) the top-notch live vocals from Klapa s Mora (so much more fun to say than ‘Super Klapa’). However, I can’t see this qualifying.

Georgia (Waterfall) – I do like this song, and again, the vocals from Sophie and Nodi are faultless. But sending a ready-made, cookie-cutter ballad penned by Swedes is a terribly Azerbaijan thing for Georgia to do, and it comes off as being an effortless selection in a negative way. 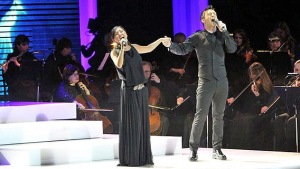 Macedonia (Imperija) – I had no idea what to expect from this duo, and yet it wasn’t this. It was the best song to premiere this week by far IMO. There’s something dated about it, something vaguely 90s…but I grew up in the 90s, and it was a great decade for me. Methinks I’ll be retrieving my FYROM flag from the depths of my wardrobe before May.

Russia (What If) – What if, indeed. What if this song had different lyrics, or a Russian version even, that turned it from a sentimental cheese-fest into a reasonable ballad? If, if, IF! It was always going to be hard for Russia to follow the grannies, and in light of this, I say bring those saucy minxes back!

Spain (Contigo Hasta El Final) – How does this go again? I can’t remember. Pastora Soler blew me away last year, and even if you weren’t a fan you can’t deny that Quedate Conmigo went somewhere. This song really doesn’t.

Which of these, if any, is giving you douze vibes?

In my experience, it’s usually the worst couple of songs from the eight that make Andra Chansen that get out of it. So even though the line-up this year is stronger than the actual final, I won’t be surprised if my favourites don’t advance. Seriously, check this out and tell me the standard isn’t higher here.

SVT has messed around with the AC structure for 2013 in a way that makes no sense to me. Instead of immediately pairing the eight songs up in the sudden-death duels that we love so much, they’ve decided to pit them all against each other in a round of voting to determine the top 5 (so far, fair enough, right?). But then, they’ve chosen to hold another round of voting just to cut one song. What is the point? Why not at least take it from a top 6 to a top 4? Sheesh.

Anyway, after that, the duels – just two – will come into play, and the lucky winners will take the final two places in the Friends Arena final. I wouldn’t be too happy if I was one of them, because let’s face it: they ain’t gonna win Melodifestivalen. But, you know. Good luck and all that.

I’d really love Robin, Behrang, Erik & Tone or Martin to nab a place. This is how I think things will go down.

The winners of Andra Chansen – Robin and Caroline, a.k.a. a half happy, half not-so-happy outcome for yours truly.

Who do you think deserves those second chances?

The dynamic duo that took Bulgaria to the dizzying heights of 5th place in Helsinki is back, looking a little older (funny, that) but sounding much the same. The three songs Elitsa and Stoyan put forward as potential entries were released a few weeks ago, and I have two words to describe how I felt when I listened to them: intrigued and disturbed.

I dig the fusion of ethnic and contemporary they offer, and Stoyan’s drumming is as appealing as it was six years ago. But there is something frightening about Elitsa’s ahem, unique voice when accompanied by such things as rappers and dance beats. Could the European public be frightened into voting for them? I don’t know.

I do know my pick would be Dzupai, Libe Boso, even though I know it shouldn’t be. But there isn’t a lot separating them in my book, so whichever one goes to Malmö, I’ll make my peace with. Even Samo Shampioni, which reminds me of washing my hair. But I just don’t think these two will be able to do what I assume BNT recruited them to do – recapture the magic of Water and in doing so, get Bulgaria a decent result for once. There may be a place in the final for them, though. We shall see.

Do enjoy the program tonight and tomorrow (that is an order). Maybe I’ll see you on the other side? (Not an order, but a polite request for you to get on over here next week).

What are you hoping to get out of this weekend? Which finals will you be tuning in to?