Hello there. Long-ish time, no see! Today I’m adding another kind of post to my repertoire, which may or may not go down as well as the rest do or do not…do. Anyway, it’s the first in a new series called Most-Played (I bet you didn’t see that coming) which has come to be with a little help from iTunes. Every now and then I’ll be presenting you with a list of my personal MPs – all part of a Eurovision-themed category, of course – and asking/pleading/begging etc for you to share your own. I’d love it if you’d humour me on those occasions, starting right now with my most frequented winning songs. I’ve got to admit, I was a little surprised by some of the songs that came up, especially since I recently completed my top 50 which looked very different in terms of the champions. I can only blame shuffle and my ever-changing tastes, I suppose…

I can’t remember ever skipping over this when it came up in shuffle. One whiff of the opening riff (poem unintended) and you just know it’s time to roll up your shirt and do some impromptu belly-dancing whilst your dog watches on and wonders if you’re having an epileptic fit. Or is that just me?

As a result of Sertab’s performance, scientists concluded that her hips are just as truthful as Shakira’s

Although I wouldn’t call this my all-time favourite winner at the minute, I’ll always have a special place for it in my heart music collection, as it won Eurovision the year I was born. Being a September baby, it wasn’t the first winner of my lifetime, but I refuse to acknowledge the song that was. All I will say on that is whyyyyy meeeeeeeee?

Carola was confused as to whether she’d been captured by a stormwind, or if somebody just turned the wind machine up too high

Apart from bedroom belly-dancing, there are few things I love more than rocking out to the monstrous winner of 2006 with absolutely no holds barred and no shame. When you’re a pop music aficionado there are so few occasions on which you can let loose like that, so I’d like to thank Lordi for the music – the most hardcore music you’ll ever be able to associate with yours truly.

Greece’s lone winning song is hardly a groundbreaking one, but it definitely makes me want to smash some china (something my mother does not appreciate). It’s also a great sing-along song, so when I’m all exhausted from a) hip-shaking to Sertab and b) head-banging to Lordi, I can just collapse on the floor and mouth the lyrics. Relaxing! 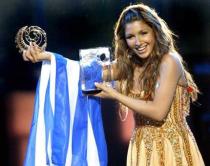 ‘Now here’s one I prepared earlier…’

Admittedly, both this version and the English version Wonderful Dream combine to make this winner one of my most-played, but the fact that the English version is just as listenable has to count for something. I think this is one of the more timeless victors of Eurovision’s earlier days. 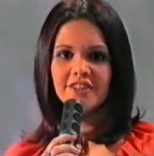 I wonder if Anne-Marie’s wonderful dream featured her as a talk-show host?

Trust me, I’m as shocked as you are to see that, out of 50+ winners, this is among my 20 most-played. I suppose, as a song that you might just happen to listen to, it comes across better than it does as a song that won Eurovision (all those times I said I was over it, I lied).

‘Have you ever considered a career as an armchair, Ell?’

How do your most-played winning songs compare to mine? Let me know below ↓