Hello yet again! I hope you’re having a decent week so far, although it’d have to have been majorly so to top mine. Get this: Josh Dubovie not only retweeted, but also favourited one of my tweets yesterday. Try and stifle your jealousy, people.

Okay, so it’s not that exciting, but since I figure Josh isn’t famous enough to have somebody tweeting on his behalf (harshly but realistically) I’m chalking this up as a bonafide celebrity interaction. Plus, I’m pretty sure he and I are BFFs now. That’s how things work these days, right?

A-hem. Moving on – this is the penultimate installment of my ultimate countdown, also known as the last one before the last one. That means my top 10 will be revealed sometime in the very near future…why, that’s almost as thrilling as getting some Twitter action from some guy who came last at Eurovision!*

* Don’t be offended, Josh, I do love you. I’m just stating the facts. 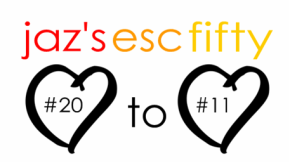 There’s more than a slight Turkish influence in this entry, one of the many churned out by ESC legends Siegel and Meinunger. Do I have a problem with that? Nein! It was only natural that the home crowd in Jerusalem would go wild for it, but I give it a belated douze having absolutely no Turkish (or German) roots. It’s original, ethnic and catchy, and has a chorus perfect for singing along and/or arm waving to.

Sigh…this song is so lovely. Sign language and cute guys aside (in my defence, I was fifteen the first time I saw the performance and my hormones were raging) it’s another message song a la Ein Bisschen Frieden that doesn’t have me reaching for a sick bag. I love the humble nature of it and the lyrics, even though they are nonsensical at times. That is so rarely the case with a Eurovision song. Cough.

B & H is one of my favourite Eurovision countries, thanks in large part to songs like Maria’s. I don’t get the impression that it was a fan favourite, but for a girl who has long been fond of a Balkan ballad (that would be me) it’s a personal favourite. It starts off quietly, as many do, before building slowly and steadily into a crescendo that practically begs for a wind machine to be switched on to MAX. And then it ends very suddenly, which just adds to the drama. Oh, and I love her dress.

Jónsi himself is pretty heavenly – I reckon I could carve an ice sculpture with those cheekbones – but that’s irrelevant seeing as this list is about songs and not girlish fantasies of creating artworks with famous people’s body parts. I’m guessing most of you will be thinking about this song and stifling yawns, but I think it’s a really high-quality ballad with a great chorus and a rather impressive money note. I do think it works better in audio than it does live, as easy on the eyes as Jónsi of yesteryear is.

My love for this song probably stems from my late-1990s obsession with N*sync/Backstreet Boys/Five et cetera. Then again, I’ve never really grown out of boyband pop, so maybe I can’t blame my tween self. Prime Minister weren’t as conventionally handsome as the bands I was used to, and they didn’t have the best live vocal chops, but their all-white outfits and, of course, their song, picked up the slack. Expertly crafted catchy Russian pop (with an equally great Russian version).

Forget Latvia and Anmary – it was Estonia and Ott who had the most beautiful song of the 2012 contest. It’s a dead set spine-tingler in my opinion, no matter how it’s performed (I believe Ott had sung it approximately 12487 different ways between landing in Baku and the final) thanks to simple but clever construction, the beauty of Estonian, and an amazing vocal. I only wish it had managed to squeeze into the top 5.

Yes, it’s another Britney-esque, 1990s-esque pop song that I love to death. But all of you who don’t must still think it got a raw deal in coming last, failing to outscore the likes of Switzerland’s Dans Le Jardin De Mon Ame which would be high on my list of god-awful entries. I did not see it coming – Malene was like a blonde, female, Danish Tooji…or is Tooji a brunette, male, Norwegian-Iranian Malene?

I’m pretty sure the only song with more addictive clappy bits than this is the Friends theme. FYI, addictive clappy bits are fun, and because this song is full of them, and has a cracking melody and singalong chorus, it makes the whole song über fun. I recently included it in a party playlist here on the blog, and with good reason. Floorfiller alert!

Lyrics are so overrated…at least when you can make a three-minute song as stunning as this that barely incorporates any. It is simplicity and subtlety (in the context of Eurovision, anyway) that nabbed the victory for Norway and, seventeen years on, give me goosebumps. And visions of castles and forests and unicorns and stuff.

Finally, we have a prime example of how to do Eurovision. You don’t even have to factor in the perfect package that was Xena, Warrior Prin…er, I mean, Ruslana’s, performance to acknowledge that. Wild Dances is a song that never gets old, a brilliantly balanced blend of ethnic and pop sounds, and a loungeroom dancer’s dream.

NEXT TIME: Will I decide to post my top 10, or will I torture you by making you wait even longer? If I do the latter, what will I post instead? Does anybody even care? All the answers to those questions and more, in just a few days.