This list features gimmicks of the prop and people variety (and no more pompous definitions, I promise). There actually weren’t that many to make a list of in Düsseldorf, but for you, I have managed to locate ten.

Which one was your favourite? 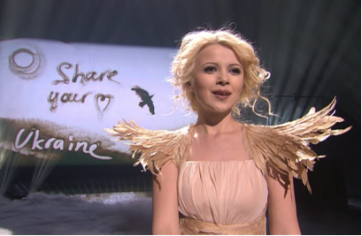 Tried and tested by: nobody

I love it because: I loved everything about the Ukrainian entry last year. But I also love how original it was. Many, many gimmicks have graced the Eurovision stage, but 2011 was the first time a woman dressed like Dracula’s missus got up there and proved that playing with sand can be impressive, if you do it the right way. I don’t think Ukraine would have managed 4th place without Kseniya Simonova, sand artist extraordinaire. 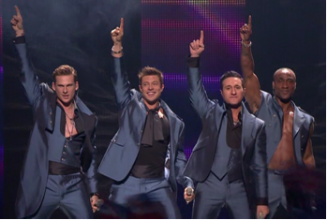 Tried and tested by: technically, nobody

I love it because: boy bands like Blue defined the music of my girlhood, alongside Westlife, Five, the Backstreet Boys, Boyzone, and any other band from the 90s or early 00s that featured a bunch of relatively good-looking guys, including one who got really famous and one whose name nobody remembers. The news of Blue’s reformation for Eurovision turned my then nineteen-year-old self into a hysterical, screeching fangirl (something that will only happen again if One Direction represent the UK in a future contest…a.k.a. never). 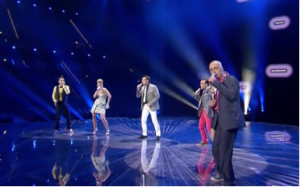 I love it because: it’s an amazing talent, and it takes guts to stand on a teensy stage in front of thousands with millions watching on TV, and provide not only the vocals, but the music for your song too, using only your mouth. Witloof Bay’s live performance was studio perfect, and even though I’m not a huge lover of their entry, I’ve watched it back more than a few times over the past year. 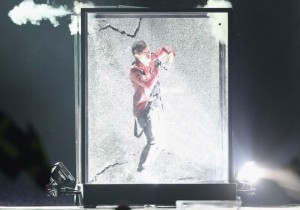 Tried and tested by: nobody, unless you count Søren Pilmark’s “Whoops, I dropped the trophy!” gag during his co-hosting gig of Eurovision 2001.

I love it because: Eric Saade looks terrified when he goes in for the smash, and I find that very funny. It’s unknown whether he was afraid that a) he might end up with a shard of glass permanently wedged in his person or b) the glass-smashing detonator would fail to work and Sweden would be responsible for a big boo-boo on live TV, but either way I get enjoyment out of the barely disguised ‘HELP ME!’ expression on his face.

(This image refused to upload. Apparently my computer refuses to cooperate with images depicting such hideous clothing…)

Tried and tested by: How much time do you have? There is two words for the quintessential costume reveal, however, and they are Bucks, and Fizz.

I love it because: it never gets old. Despite the fact that each and every one of Daria’s revealed outfits was appalling (and that the magician guy was always loitering creepily in the background) the quick changes were well executed and timed.

Tried and tested by: several, including Carola, Dana International and Charlotte Perrelli – but the last winner to defend their title directly after winning was Corry Brokken in 1958.

I love it because: it showed how proud the Germans were of Lena and their victory, figuring she would do well again. I am still bitter that, in making the top 10, she did leapfrog Blue, but ultimately I have to be pleased about Germany’s turnaround in luck, which will hopefully continue in Baku.

I love it because: it’s amazing! HOW do they do that? If you know the secret, I’m begging you, tell me. It’d be a great party trick to have up my sleeve (or possibly the leg of my pants). 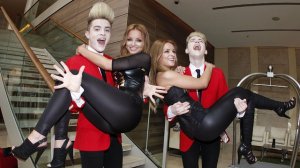 Tried and tested by: someone, I’m sure. Or should that be ‘someones’?

I love it because: one set of twins would’ve been great enough, but two sets? Well, that opened up the opportunity for some hilarious and “spontaneous” photographs, one of which I’ve stuck here for your enjoyment.

I love it because: who wouldn’t? Russia found an inventive way of getting Alex’s name up in lights, and for that I congratulate them.

I love it because: well, it’s the only notable gimmick left that isn’t Armenia’s giant boxing glove. I’m sure there’s people out there who would appreciate the gesture, although any hearing-impaired viewers would surely have lip-read the lyrics as Evelina sang them. Kudos to her anyway for multitasking.

NEXT TIME: In my last DIR post, I’ll be comparing my top 10 from this time last year with my current top 10. Have things changed? Time will tell…

3 Responses to “Düsseldorf in Rewind: My top 10 gimmicks”