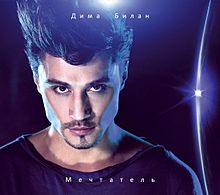 I hate to begin with a cliché, but I can’t help comparing Dima to a good wine – he just gets better with age! My basis for saying that is all down to the saying itself as I can’t confess to being a wine person…but that’s irrelevant. I suppose what I’m trying to say is that Dima’s music appeals to me more and more with every album, although this is the first album of his I have gone (online) and paid money for, so you can guess where this review is going.

Mechtatel is Dima’s 6th studio album, and his 3rd since winning Eurovision in Belgrade. It starts off very strongly indeed with five slickly produced, catchy tracks. The first is my favourite of the whole album – the almost-title-track Mechtateli (Dreamers), a high-quality pop ballad in the mould of one of my all-time favourite songs by fellow Russians and Eurovision participants Serebro, Dyshi. It’s what sold the album to me in the first place. Zadyhayus (I’m Suffocating) is also an excellent song, one of several on the disc that make R & B and club sounds work together in perfect harmony (awful musical pun 100% intended). Safety, Dima’s unlikely duet with US songstress Anastacia – who, in a fascinating fact, performed the soundtrack to several of my school socials – is a little too Americanised, but I still get a kick out of it, and I do think his and her voices sound good together.

My other highlights would be Po Param (In Pairs); Zvezda (Star), which features Dima’s sister Anya; and Slepaya Lubov (Blind Love), which are all very different songs – one acoustic-driven pop, the next a haunting ballad, and the last a dance track that adds a Eurotrance flavour to the dance sounds that are dominating the US/UK charts at the moment.

Another bonus of the album is the accompanying DVD that features five music videos, plus a rather narcissistic photo montage of the man in various poses and stages of hair-poofiness. Watching it, you can learn a lot, including:

There isn’t much I don’t like about Mechtatel – I do prefer Dima singing in Russian, for one, and I feel like the two remixes tacked on to the end are unnecessary. I also think the track Get Outta My Way is a bit contrived and lacks the ethnic edge that often attracts me to Russian pop. But all in all, I’m loving the album. It’s a polished and modern effort that was a while in the making, and that really shows. The DVD (minus photo montage) adds another fun element to the album, despite the fact that in this day and age we can go to Youtube and watch anything, anytime, anywhere. I’m giving it four stars!

Interested? Grab your copy of Mechtatel online at eBay or Amazon.co.uk, or if you live in a country that actually devotes more than one miniscule shelf of its music stores to world music (and that shelf contains 20 copies of The Lion King soundtrack) head there.

COMING UP: Turn away, JESC haters! EBJ’s Junior Eurovision month is about to kick off big time…