The commemorative medal: This piece of Moscow 2009 merchandise was part of the Eurovision shop Surprise Package that I mentioned in Part 1 of the haul. It’s not something I’d look to buy myself, but it’s definitely a lasting reminder of each year – the medal is nicely made and distinctive enough to not get mixed up with my loose change (of which there isn’t a great amount at the moment!). If you want to get your hands on this year’s edition, they are sold separately and as part of the 2011 package at eurovision.tv. 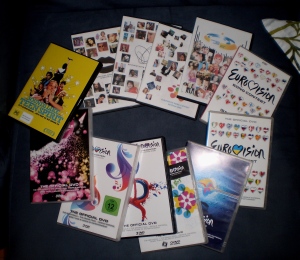 From toppish-leftish, I have Eurovision 2000, 2001, 2002 and 2003, all from www.euro-heaven.com and all adorned with the best case covers I could manufacture without the aid of Photoshop. These are obviously burnt discs, as first official DVD was released in 2004, but I haven’t had any playback problems with them. The prices are quite reasonable too.

Next are those official versions, from 2004 to 2010, purchased online at amazon.co.uk, as well as sourced from your average music store (in my case, JB Hifi). If you’re missing any, it pays to check eBay and Amazon in the quest to complete your collection, for the best prices.

Last but not least is the documentary Sounds Like Teen Spirit, which covers the 2007 Junior Eurovision contest, focusing particularly on the kids from Cyprus,Georgia,Belgium andBulgaria. It follows those contestants from their triumphs at the national finals, to rehearsals, and finally to the big event inRotterdam. It’s a really entertaining and, as much as I hate to say it, heart-warming examination of youth and Eurovision itself – well worth splashing (a bit) of your cash on. You can get it pretty much anywhere online.

The fan books: Also referred to as the official programmes, these are sold once again at the Eurovision online shop, with 2006-2008 in a box set. I have a spare box set (long story) which I will be putting up on eBay shortly – for a very reasonable price, of course – so if anyone’s interested, watch this space and I’ll let you know when they’re up.

These are a really nice keepsake, packed with artist info, lyrics, details about the draws, winners, stage etc…everything you’d expect. 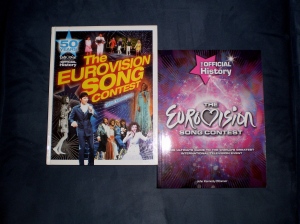 The ESC bible: The Eurovision Song Contest Official History, by John Kennedy O’Connor, is the most exciting history book you’ll ever read (I sure wish this had been my high school textbook for the subject – straight A’s anyone?) and THE must-have for any fan. Above I have the original 2005 version, released for the 50th anniversary, as well as the updated 2010 edition, which covers up to the 2009 contest. The reason I have both is because the first one is literally falling apart from too much use, so I decided to upgrade a while ago. I kept the lame one though because a) It has a different cover and I am weird like that, and b) It does have different appendix material. The newer ones feature a lot more pages of statistics, as well as lists of the semi finals and their qualifiers (including 1993 and 1996). Get yours from good bookstores such as Borders (if you can find one that’s still open!) or online.

The other books: The ESC Complete and Independent Guide: 2009 Edition by Simon Barclay – this is for hardcore fans willing to spend hours poring over every minute stat from the last half-century of Eurovision. The detail is immense. From amazon.co.uk. A Song For Europe: Popular Music and Politics in the ESC by Ivan Raykoff & Robert Deam Tobin – once again, this is full on, but offers some real insights into the social, political and cultural sides of the contest. The essay onSwitzerland’s conflicting identities is my personal favourite. Also from Amazon. This Is Sweden Calling by Des Mangan – this is a much more digestible book by Australian comedian Mangan, which flits through each year in a few paragraphs. It’s not to be taken too seriously, and at times it appears the author is making a mockery, but is still a nice, light read. I first came across it in my local library, only to spot it months later in a book exchange for $8. Win. Nul Points by Tim Moore – This one sees Moore travel around Europe meeting up with some of the artists who got the dreaded Easter Egg at Eurovision. If you haven’t felt sympathy for the UK’s Jemini before, you will after reading this! Also from Amazon.

So that’s the complete collection – I hope you enjoyed it. Once again I apologise for the demented picture/word arrangement going on here. I could not for the life of me figure out how to fix it.

To finish off today I wanted to have a quick word about that little event that’s happening in a few days time. You know, what’s it called? Er…Eurovision? Yeah that’s the one. Eurovision 2011. OH MY GIDDY AUNT, EUROVISION IS NEXT WEEK! I cannot believe it! My stomach is full of butterflies bigger than Belarus’ – excitement butterflies, of course. I’m still working on my semi and final predictions to go out Tuesday; my flamboyant outfit for Friday night, when we here in Australia get to tune in to SF1 is in progress; and the Big 5 had their first rehearsals today – by all accounts, they impressed, including the boys in Blue who you may have noticed I’m 100% behind. For all the latest info on the rehearsals and all the juicy gossip direct from Germany, download your chat podcasts  from www.escinsight.com.

And when you’ve finished listening to them, come back and join me as I count down the last few days to the best week of the year!

All the news coming back from Dusseldorf has reinforced the notion that 2011 will be an epic year, and I can’t wait to live it with you all!