If you’re not ready for Junior Eurovision 2017 (which TBH I’m not, considering I’m still frantically trying to get my song reviews done on time), too bad – it’s nearly here! The countdown is in single-digit days, rehearsals have started in Tbilisi’s festively-decorated Olympic Palace, and Mariam Mamadashvili is probably wondering what to have printed on her business cards now that ‘Current JESC Champion’ is about to be void.

In fact, the contest is so close than I have zero time for a classic Jaz Introductory Euroramble™. All I’m going to say is here’s Round 3 of my annual reviews, feat. Australia, Belarus, Malta and Ukraine. Check out my verdicts and vote for your favourite of the four below!

Last year…I couldn’t help being happy – though very, VERY confused – when Alexa Curtis finished 5th with We Are. I suspect the absence of a televote had something to do with it.

The 2017 verdict We’re back, bitches! Actually, scratch that, because I should be keeping my language in check when discussing JESC. We’re just…back. As an Australian, it’s hard not to be pleased that our Eurovision invitations are still being extended (even in the face of frequent backlash/mutterings from other countries, which I do understand. But at the same time, IT’S HAPPENING, SO GET OVER IT). Also pleasing is the fact that we’re yet to send a bona-fide dud to the adult or junior contest, and the seriousness of our approach is worth at least one less snide remark, right? I definitely think so when it comes to Isabella’s Speak Up, which is arguably our best JESC entry ever. It doesn’t have My Girls whiff of lyrical cheesiness, or the wishy-washiness of We Are – the lyrics are great, the chorus is catchy and easy to sing along to, the vibe is young without being too young, and it includes one of the best key changes of the year (which Isabella has already proven she can nail live). I honestly feel like I would rate this song no matter which country it was coming from or what language it was sung in. It’s not as bubblegum pop as, say, Kisses and Dancin’ from The Netherlands last year, but it has a similar charm and upbeat energy that makes you smile. All in all, there is very little to pick on re: Australia 2017 – before seeing it live, anyway (rehearsals have obviously started, but my golden rule is NEVER watch them). Isabella will be backed by some dancers, the outfits and graphics will be slick, we’re performing second-to-last…what could go wrong in a contest that’s weaker than the last few? Well, a lot. I have an unfortunate feeling that even though a) Speak Up is our best Junior track so far, way better than We Are, and b) as I just mentioned, 2017 is not the strongest field of songs, we’re not going to make it into the top 5 again. I think we deserve to with this – not necessarily reaching the podium, but 5th or 4th place, sure. I just have this gut feeling that Australia is headed for more of a 6th-8th ending á la 2015. Still, I don’t have the most reliable guts on the planet, so anything could happen. My fingers are extra crossed! 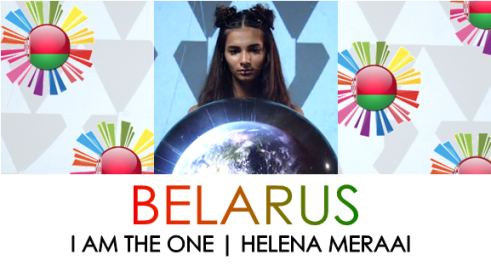 Last year…Alexander Minyonok and Muzyka Moikh Pobed received the Christer Björkman douze points of approval, which (when combined with a usage of hoverboards that totally eclipsed Serbia’s) helped him hit the heights of 7th place.

The 2017 verdict This might not apply at adult Eurovision, but you should always keep an eye on Belarus at Junior. They’ve won it twice and done very well for themselves on most other occasions. The trend continues 110% with Helena and I Am The One, and I’m going to cut right to the chase by saying she may actually be the one (someone had to say it). This song is undeniably high-class, and I don’t think many people could call it anything less than flawless without lying a little bit. It’s not even in my personal top three for 2017 and I’m calling it perfection. Beautifully produced – right down to the music video – and big on atmosphere and drama, it does everything a dark pop song should do without being cookie-cutter predictable. Belarusian lyrics + English title = totally fine by me, as are the explosive choruses and moments of light and shade that make the Serbias and Portugals of the year sound flatter than a pancake. Helena’s voice can get a teensy bit grating in the chorus if I’m extra-critical, but as long as she has ultimate control over it and stops it from entering The Screech Zone (it’s like the Twilight Zone, but you need multiple pairs of earplugs to make it out alive) I can deal. Speaking of things that might happen live…I want this performance to be the way I’m picturing it in my head SO BAD. The mystical ball from the MV better be there at least, and dynamic, epilepsy-triggering laser lights basically go without saying. For the costume, I’m thinking boho-robot, but that’s a concept I need to write an explanatory thesis on later. For now, I don’t know what else I can say about Belarus bar the following: the other four or so songs in winning contention better watch their backs. Then again, this could be the pre-show favourite that doesn’t quite meet expectations. There’s only a few days until we find out!

The 2017 verdict If this was the Junior Eurovision Cuteness Contest, Malta would walk it because Gianluca is so, so cute *melts despite not being the biggest fan of kids in general*. But it’s not. Sure, being adorable and charismatic and having impressive eyebrow-waggling ability for a 10-year-old will benefit him, but he needs an A-grade song to secure Malta’s third JESC win since 2013. Does he have it in Dawra Tond? Well, it was better three years ago when Armenia sent it and called it People of the Sun. It is very similar to that bronze medalist of Betty’s, but as with movies and music, the original is usually better. Still, the infectious sunny energy of POTS is worth taking “inspiration” from, so I can’t be too harsh on Dawra Tond. The pros include: a bit of Maltese for the first time since 2010; simple lyrics and phrasing that make this sing-along friendly and a total earworm; a good combo of retro (there’s something Mambo No. 5 about it) and modern dance-pop sounds; and that energetic beat that Malta can’t stay away from for too long (though they’ve won Junior with and without it). Overall the song doesn’t show off Gianluca’s incredible vocal abilities as much as I would have liked, but it does have some big moments. Performing between female ballad-fielders Ukraine and Russia should make Malta stand out, but with Polina being a heavy hitter and a handful of other stronger songs scattered throughout the running order, I wouldn’t bet any money on Gianluca winning (but I’m still pre-predictions, so don’t hold me to that if he does!). Honestly, I don’t want him to, but I could live with a decent finish in the range of 3rd-7th. Any higher and I’ll be forced to post bitter (yet not offensive because KIDS) statuses, tweets and stories all over social media to console myself.

Last year…Ukraine had something of an off year at JESC, only making it as far as 14th with Sofia Rol’s ballad Planet Craves For Love. The nonsensical Cirque du Soleil staging didn’t help.

The 2017 verdict Ukraine are a bit hit-and-miss with me at Junior, though I’ve liked all of their recent entries (I’ve got no complaints about the 2012-2016 songs on a purely musical level). And hit-and-miss is actually how I feel about Anastasiya’s Don’t Stop specifically. It has grown on me since it won the national final back when dinosaurs still walked the earth (a.k.a. ages ago). But, while there are parts of the song I love, there are other parts that really irritate me – so on the whole I can’t say I’m going to be voting for it. Getting my tick of approval are the verses – nice melody and structure, plus an acoustic-y, chilled-out vibe that gives me life – and anytime the violinist pops up even though that does remind me a bit of Jacques Houdek’s My Friend. However, my main peeve is kind of a big one: the chorus. Anastasiya seems very sweet and she has a nice voice, but whenever an ‘ay-i-ay-i-ay-i-ay’ comes out of her mouth (which is a handful of times in every chorus) the nearest mute button becomes all I can think about. Sometimes you don’t know why you’re annoyed by something…you just are. And sadly, as sweet as she is, Ana is not Gianluca-level cute in that I would forgive her if she stole all of the money out of my purse. There’s always the chance of her new and improved live version winning me over, I guess. Looking at/listening to Don’t Stop as objectively as I can, I think it has the potential to do fairly well in the contest, if not amazingly so. It’s not a winner (if Ukraine think that the key to winning Junior is sending a very small child called Anastasiya, they are wrong) but my notoriously unreliable crystal ball tells me mid to lower top 10 is attainable.

Well, there’s another four songs I can cross off my list. And here’s the mini-ranking from this round:

So Helena’s the one AND number one on this occasion, closely followed by Isabella *screams patriotically*. This was a pretty high-scoring round though, so on the miniscule chance that Anastasiya is reading this, she shouldn’t feel bad. That score won’t put her at the bottom of the overall ranking still to come. DRAMA!!

Is Belarus your favourite of today’s four tracks, or is Malta more your cup of tea? Perhaps Australia or Ukraine have served up your preferred kind of pop. Take your pick!

NEXT TIME There’s one final round of reviews for me to get through – so who’s left? Armenia, Ireland, Russia and Serbia, that’s who. Keep an eye out for that post to find out who gets douze points from me.