I’m back…again!!! I’ve had to announce my comeback after an extended blogging break pretty often in the past, so I figured why stop now?

My excuse is the same as always: even though Eurovision is my one true love, the older you get the busier you tend to be, and the more commitments you tend to have that keep you from sitting in bed in your pajamas writing about Europop (sadly). Having said that, I will do my best to be here on EBJ as often as possible in the lead-up to Junior Eurovision, the start of the 2018 NF season, and beyond. I’m like Valentina Monetta – you can’t get rid of me permanently and I’ve only made it to the Eurovision final once.

Since my last post, a lot of stuff has happened on Planet Eurovision: JESC switched venues (!); Eurovision Asia officially became A Thing™ (!!!) and Louis Walsh admitted that he thought Ireland would float – hot air balloon pun intended – straight through to the final in Kyiv (?!?!?). Even so, today I wanted to talk about something else. More specifically, I wanted to engineer a song contest showdown in which particular pairs of ESC entries would go head-to-head until, as Ryan Dolan might say in this situation, only one survives (from each battle). I actually started a similar series ages ago but accidentally forgot to continue it. Oops.

For no reason other than I felt like it, this song battle reboot will pit the top 10 tracks of Stockholm 2016 against their 2017 counterparts – so that means Jamala VS Salvador Sobral, Sergey Lazarev VS Sunstroke Project, and (amusingly) Frans VS Robin Bengtsson (because Sweden is apparently awesome at finishing 5th). I’m going to weigh them up against each other musically, crown my personal champ and then give you guys the chance to vote for your preferred song from each pair. Make sure you read through to the end (a toilet break may be necessary at some point) to vote for the best overall top 10.

Stockholm VS Kyiv – which city’s left-side scoreboard was superior? Let’s get this showdown started and find out! 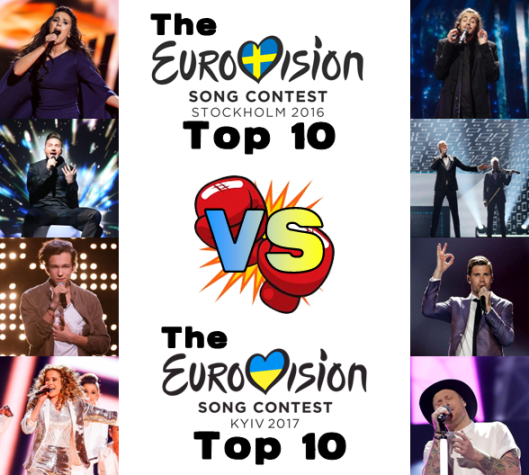 They’re both brilliant brunette vocalists who made me burst into tears with their emotional performances. I worship the phenomenal woman-power of one and want to give the other one a bone-crushing hug. But which artist had the better winning song? I’m sorry if you wave your pom-poms for Team Salvadorable, because I have to say IT’S YOU JAMALA. This is my opinion, obviously, and you’re welcome to disagree with it. But I was hypnotised by 1944 from first listen, and when it won it was my #1 entry of the year. Amar Pelos Dois took time to tug at my heartstrings, and it’s not something I’ll press play for as often as I did (and still do) with last year’s winner.

This is more of an apple-to-apple comparison than most of the other head-to-heads on this list, which actually makes it easier to pick a winner. If I were an Australian who’d be on the Olympic podium for patriotism (if that event existed) then this battle would not be in Bulgaria’s favour. But I like to consider myself pretty objective, so – as kick-ass as Dami’s performance was, and as much as I admire the Sia-esque power pop of Sound of Silence – Kristian’s Beautiful Mess is a better song in my brain. It’s just as strong in studio as it is when you see it on stage, whereas Sound of Silence relied a lot on the pizzazz of the performance to push it into top-two territory.

There are a lot of differences between the two songs that have taken home the bronze at Eurovision in the last two years. In a way, YATOO was the Italy 2017 of 2016 – a big longstanding favourite that didn’t follow through in the end (though Sergey came closer than Francesco); while Hey Mamma was a massive surprise in terms of propelling Moldova into the top three for the first time. Personally, I loved Hey Mamma immediately and want to weep with joy every time I remember that it came third, whereas YATOO was a track I hated at first (because I thought it was a terrible ESC throwback) but came to love later. I listen to them both on repeat, but my favourite of the two has to be Hey Mamma because it’s a totally 2017 slice of Europop – with a generous dollop of Epic Sax on the side – that never even had to try  to win me over. Sergey fans, don’t be so mad…if you knew me, you wouldn’t be surprised.

They both wore black and sang (mostly) in English, but that’s where the similarities between Poli and Blanche come to a screeching stop. I guess you could also say that both ILWAC and City Lights were examples of so-cutting-edge-you-might-need-a-BandAid pop music, but the songs have totally different vibes. For the most part, I’m more likely to lean towards an upbeat song that I can awkwardly dance to (my take on Poli’s choreography is unfortunately reminiscent of the Chicken Dance), so even though I do think City Lights is a brilliant song – and I’m so happy Blanche got over her nerves to deliver a performance worthy of the top 5 – ILWAC is too irresistible for me to…well, resist. Summer hit > melancholy electro-bop. Just.

Winner If Love Was A Crime

DAMN YOU, SWEDEN, FOR FORCING ME INTO THIS DECISION BY FINISHING FIFTH TWICE IN A ROW!!! Even if this is your first visit to EBJ, you can probably sense the Swedophile status that makes comparing something Swedish to something else Swedish and deciding which one’s superior a heart-palpitating task for me. There’s never been a Eurovision song from Sweden that I haven’t at least liked (2009’s La Voix is just noise, not a song, so it doesn’t count) and my relationship with their entries from 2016 and 2017 is more than platonic. But…giving in again to my penchant for a danceable piece of pop, I’m declaring I Can’t Go On the winner by one of Robin Bengtsson’s perfectly-groomed chin hairs. That’s because the second I hear it start, I perk up and prepare to sing loudly over the top of him, and If I Were Sorry doesn’t have that power (sorry!).

Winner I Can’t Go On

Now THIS might be a controversial battle – either because you guys will be split down the middle, or because it’s actually an easy one for me but that might have some people plotting my death. I like Occidentali’s Karma a lot, and always have (‘always’ = since February when we first heard it), even if I suspected for the longest time that Eurovision 2018 wouldn’t be popping up in Italy. It’s fun, it’s catchy, it makes astute observations AND it has its own dance á la the Macarena…what’s not to like? Nothing. But you know what? I like it rivers, and I love J’ai Cherché oceans. Amir is just adorable (it’s not his fault that his name doesn’t illustrate just how precious he is, unless it’s not too late for ‘Amir-acle’ to catch on) and J’ai Cherché is a masterclass in sunny, uplifting – but not cheesy – folk-pop. It’s one of the few songs you can clap to without feeling like an overly-enthusiastic dad at his kid’s soccer game. C’est magnifique.

#7 | LoveWave by Iveta Mukuchyan VS Yodel It! by Ilinca & Alex Florea

This fistfight is a no-brainer for me to call champion on, so I won’t keep you in suspense. Simply put, LoveWave has aged better over the past year-and-a-bit than Yodel It! has in a matter of months – for me, anyway. I have to be in the right mood to listen to Alex and Ilinca doing their yodel-rap duties these days, and if I have even a hint of a headache, forget it. Iveta, while not one of my favourites from last year’s contest, left a more sophisticated and less irritating legacy behind (and she really put the ‘leg’ into legacy).

For those of you who’ve forgotten about the epic scoreboard leap Poland made in Stockholm, here’s your reminder (I don’t have room to insert the GIF, so just pretend I did). I don’t begrudge Michał his awesome last-minute result, but in this battle he was bound to lose. Even if he’d turned up at my front door with pleading eyes and a million-dollar bribe (which shockingly, he didn’t), the love I have for Origo would have seen me slam the door in his face – while being careful not to maim any of his majestic man-hairs, of course. Joci Pápai’s ethno-dance dream was and still is my douze pointer of Kyiv’s 42, so nothing short of my all-time favourite ESC entry (Lane Moje by Željko Joksimović, FYI) would have a shot at changing my allegiance.

Donny definitely wins the showdown when it comes to song title length, but does victory come easier to Isaiah (HA HA) in terms of song quality? And another question: will I be deported if I say no? Let’s find out. I don’t think many Eurofans would argue that Donny himself and his second Eurovision song have more of an x-factor than Isaiah and his song – ironic given that Isaiah won The X Factor. It’s probably down to Donny’s more extensive stage experience and showier personality, plus an entry that just happens to be more exciting and have more mass appeal. That appeal does extend to me, although I am fond of Don’t Come Easy. But *packs suitcase* I just *heads to port from which I’ll be shipped off to a faraway land for being un-Australian* prefer Donny’s package. No dirty thoughts, please…you know what I mean.

Winner I’ve Been Waiting For This Night

Squeezing into the top 10 in 2016 and 2017 were two great tracks from Belgium and Norway. For the former, it was their second consecutive year on the left side of the scoreboard, while the latter country was clawing their way back up after a DNQ on Swedish soil. But who did 10th place better? I’m pretty torn, to be honest. Laura’s grand final opener put the fun into funk and proved yet again that saxophones are as effective at Eurovision as they are in George Michael’s Careless Whisper (a.k.a. VERY). JOWST, on the other hand, brought something uniquely 2017 to the contest stage with lyrics that I previously crowned my faves of the year. As much as I want to be loyal to Laura, I think I have to go with Grab The Moment because it’s a little cleverer and a lot more original.

Okay…we’ve finally made it through the entire top 10 of both Stockholm ‘16 and Kyiv ’17. Now the main part of the show(down) is over, in true ESC style it’s time for some overall results.

DAMMIT. It’s a tie – practically Eurovision 1969 all over again (but on a much, much smaller scale and minus booms + bang-a-bangs). I am going to break this tie though, looking at the entire top 10 of each year and deciding which one was stronger – for me. BRB.

Maybe I’m a bit biased since I was there (#subtlebrag) but I do think the overall kick-assery of the 2016 top 10 is slightly more forceful – there was practically a residual shoeprint – than the 2017 top 10. Do you agree? If you voted in the polls above, then I’m guessing you won’t mind voting in this one to let me know.

You can give me the lowdown on all the super-important choices you made above in the comments. Not gonna lie, I kind of want someone to start a fight with me over “the clear superiority of Sergey in comparison to Sunstroke Project Vol. II”. Just remember, if we all liked the exact same songs to the exact same degree, Eurovision would be extremely predictable and pretty boring.

But obviously, I’d still be obsessed with it.