Are you ready to rumble, NF-watchers? You’re going to have to be (says someone who’s far from being ready herself) – because the first of February’s four Super Saturdays is upon us! 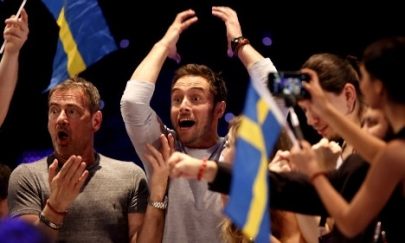 Tonight is just one example of why the word ‘February’ is often paired with the word ‘frantic’ when Eurovision fans are conversing. If you want proof, a) you’re very demanding, and b) here it is, in the form of this evening’s epic programme of events:

Basically, there are a lot of firsts, a third and a fifth on this particular Saturday. Plus, there’s the kickoff of Latvia’s Supernova to look forward to tomorrow night, featuring Samanta ‘I’ll Still Be Attempting To Represent Latvia When I’m Dead’ Tina, and a song composed by none other than pocket rocket Aminata. These are busy times, y’all. What exactly do other people do on the weekends?

I can’t answer that, but I can tell you what I’m about to do, right here, right now: talk semis. Reviewing, ranking and predicting NFs is practically mandatory at this time of year, but I’m currently unable to go too in-depth (what with work/Stockholm prep/life in general keeping me otherwise occupied). So I’m limiting myself to the most appealing semis on this occasion – and for me, that’s those from Finland, Ukraine and Sweden. So let’s get on with criticising and complimenting what’s on offer from those countries on Super Saturday numero uno, shall we?

Okay, I’ll level with you…UMK isn’t a huge drawcard for me come NF season. While Melodifestivalen is my pinnacle of the period, feat. about ten hits to every miss, UMK = about five hits to five misses, each and every year – but that’s just due to my musical taste, I guess. Still, it’s always an interesting final to follow. This first semi has proven no different. Here are the competitors for this evening:

Only half of the artists/songs above will remain in the running to represent Finland after tonight. That’s the kind of culling I admire (as opposed to the Malta-esque, more or less pointless kind), but when it comes to 50:50, I’m bound to make the wrong decision. So I want to emphasise that there’s a very clear divide between my personal favourites in Finland so far, and those I’m predicting to qualify.

My top three Thief, Draamaa and Shamppanjataivas. Yes, I’m serious. Thief is the type of laid-back (so much so it’s comatose), tropically-influenced R & B that I love when it emerges from somewhere in Europe, so Clemso would have my vote…you know, if I could vote. Draamaa is very catchy, and I enjoy the eighties vibe of it. It also sounds super-cool with Finnish lyrics (IT’S SUCH A MAGICAL LANGUAGE). And Shamppanjataivas…ugh, I know I shouldn’t like it. But it’s fun, and a little silly, and Pää-Äijät wear those brilliant sunglasses in the music video. I wonder if there’s any of those for sale on eBay? 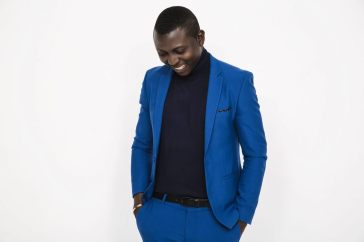 Clemso’s entry ‘Thief’ has stolen my heart. Get it? Eh? Eh? *elbows you until you do*

Which three are going through, though? Draamaa, Shamppanjataivas and No Fear. I really dislike Saara Aalto’s song, but everyone else seems to think it’s the baboon’s bollocks, so No Fear should be a safe bet (I just hope to heck it doesn’t win the whole show). Draamaa, if it’s well performed live, is my credible choice. Shamppanjataivas is my not-so-credible choice, because remember Ostarilla?

Those are my thoughts. How about you – are U into UMK? Who should make it out of this first semi, and who should be sent packing?

Ukraine: They’re back, and bringing it big time!

Well, well, well! Doesn’t this make the Belarusian NF line-up look/sound even worse than it was when it took place?

That’s the impression I get, having listened to as many of the below semi-finalists as I could find without putting in any effort whatsoever (it’s been a long week, and I am beyond scouring lower than the surface of the internet for anything).

At first glance, the names in this semi-final are the more underwhelming out of Ukraine’s two semis (what with the second installment including NeAngely and Victoria Petryk). Even with Russian ESC alumni Anastasia in the mix. But ermahgerd, guys…there’s some GREAT stuff in here. In my opinion, of course.

Only three of the nine (yes, I agree, that’s way too few) will qualify to the final. Here’s the trio I’d most like to see advance, based on what I’ve heard so far: 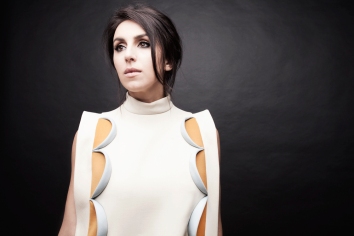 But since when did anything in this department go completely in my desired direction? I’ll give you a hint: NEVER.

So, which songs are actually going to get somewhere? Helpless, Inner Power and Every Monday. Granted, I haven’t clapped ears on Every Monday, but it just sounds like the kind of thing that would progress. I don’t rate Anastasia’s chances with her dreary power ballad, so I’m putting my prediction eggs in the baskets of The Hardkiss (obviously) and Aida Nikolaychuk (there’s a promising snippet of her song online) instead. Jamala is the act I most want to make it, but with just those teensy three spots available in the final, the odds are against her. Still, I’m hoping that she’ll go through given that I’ve discounted her (my powers of anti-prediction are second to none. What I say doesn’t go!).

Which songs/artists do you think deserve those three tickets tonight? Can any of the first semi final participants top Ukraine’s result recorded during their last Eurovision trip in 2014?

Sweden: Melodifestivalen kicks off with a semi, live from the Scandinavium!

FYI: I am aware that Sweden comes before Ukraine alphabetically…but I HAD to save the best until last. So get over it. 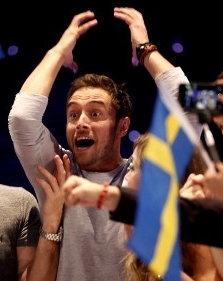 Måns knows the feels. Why else would I continually use pictures of him in this post? And kiss a poster of him every night before I go to bed?

Melfest really IS the best (it rhymes, so it must be true). The greatest NF on Earth is coming to you live from Göteborg tonight, and it’s been drama-filled already, thanks to a very un-Sweden-like scandal.

Ja, we must all take a moment to bow our heads on behalf of Anna Book, who was disqualified from competing this week after her entry Himmel För Två was revealed as the Swedish version of an entry from the 2014 Moldovan final. Oops. SVT’s got to be embarrassed about that oversight. They have tried to lessen Anna’s trauma by allowing her to perform as a guest tonight, but that could just be awkward as heck – we’ll see.

If she hadn’t been given the boot at the last second, here are the six acts Anna would be battling against: 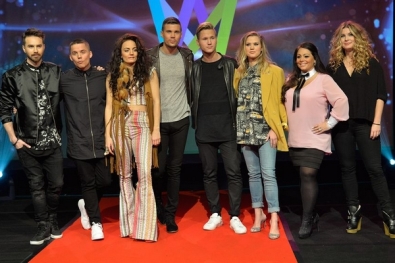 Samir was oiling his pecs at the time of this photo call. Or so I assume.

Based on the content of this inaugural semi, this edition of Melfest is going to be better than Sweden’s last post-win program in 2013, so that’s a relief. But I do feel we haven’t heard the best stuff yet. With Ace Wilder performing in the plum position, we may have heard Sweden’s Eurovision 2016 entry, however. Would I be happy if that were the case? Find out in the next sentence or so.

My favourite four Bada Nakna, Rik, Constellation Prize and Don’t Worry. Ace’s song is actually my favourite *gasp*. I love the mix of retro styles that somehow manages to be completely contemporary. I just worry (ironically, given how many times Miss Wilder told me not to) that her weak live vocals will drag it down. I can’t help my affection for Samir & Viktor, despite Bada Nakna being inferior to all of their previous releases – they’re too much fun. Rik is a bit too repetitive and not as awesome as what I expected to come out of an Albin/Mattias partnership, but I love them as a duo so much, I’m willing to ignore the song’s flaws. And Constellation Prize has a heap going for it, including a catchy harmonica riff. I think it might go further than many other fans do.

So, who’s going direkt? Bada Nakna and Don’t Worry. Samir & Viktor are going to open the show with a bang and with their torsos on display (obvs) and I think all of the app-users are going to lose their collective minds. Assuming the app works this year, I think popularity will push them through. Ace Wilder will win this semi by a landslide though, no doubt. Don’t Worry is the clear standout, and her story of defeat by Sanna is still relevant. Girl is back with a bang, and will be advancing even if she sings like a strangled street cat (like she normally does).

And who’s off to Andra Chansen? Ain’t No Good and Constellation Prize. Country music is often well received at Melfest, and Mimi has a toe-tapping fusion of country and pop to offer that has its audience, I reckon. Constellation Prize should really go direkt, but I think it will slip back into third based on the lack of abs, pecs, and general affable douchebaggery on display in Robin’s performance.

What about the others? Rik 5th, Mitt Guld 6th. Somebody has to lose, and I think Pernilla’s song is too sleepy not to. Rik will struggle to squeeze into the top four.

Honestly, I could be here all night long chopping and changing my predictions. But that wouldn’t be very entertaining for you, would it? What will be entertaining, I’m sure, is the level of my incorrectness. Will we be wrong together, or do you have a different take on what Melfest’s results have in store for us tonight? Let me know below.

I’m going to have to say a speedy ‘Catch you on the flip side, peeps!’ (apparently I have morphed into a fourteen-year-old boy from 1999) now, as I need a nap before tuning into Melfest at THREE FREAKING A.M. my time. It’s worth it, but that doesn’t mean I’m not going to complain about it.

Whether you’ll be glued to the SVT stream (in which case I might see you on Twitter for some fun times) or you’re opting to check out the action in Finland or Ukraine, etc, enjoy. But don’t have too much of a good time. This is only the start of the Super Saturdays – you need to conserve your energy!