Here’s a question for you: Bianca Nicholas, Debrah Scarlett, Elhaida Dani, Elnur Hüseynov, Leonor Andrade, Loïc Nottet, Maria Elena Kyriakou and Trijntje Oosterhuis *takes much-needed breath* all have something in common…but what is it?

No, it’s not that they all participated in Eurovision 2015 (though that is technically a correct answer too). The common thread I’m referring to is that all of these artists have appeared on TV talent show The Voice – either in their home country, or in someone else’s. Elhaida, Elnur and Maria Elena won their seasons in Italy, Turkey and Greece respectively. Loïc Nottet finished second on the show in 2014, with his subsequent ESC participation making him the third Belgian rep in a row to have made the same transition (Roberto Bellarosa won The Voice Belgique in 2012, and Axel Hirsoux got knocked out prior to the live show stages in 2013). And Trijntje got the gig of sitting in one of the big, red, excellently spinny chairs as a coach on the original Dutch version in 2012 (as did Ilse DeLange the year after).

I’m giving you all this info you probably already knew because I’m trying to make a point. That point = The Voice is becoming THE hunting ground for broadcasters making internal selections for Eurovision, as well as a frequent stepping stone to national final entry. The Idols, X Factors and Got Talents of the globe have their fair share of impact too (Nina Sublatti, Elina Born, Guy Sebastian, Daniel Kajmakoski and Bojana Stamenov all competed in one of those programs before arriving in Vienna) but The Voice is proving to be the heavyweight hitter of the moment, with masses of the show’s alumni popping up in the ESC over the past few years.

That fact – plus the convenient conclusion of Australia’s latest season of The Voice on Sunday night – got me thinking. If the land Down Under was invited back to the Eurovision family reunion next May, why couldn’t we sift through this fresh batch of The Voice finalists in order to find our next representative?

There were some top-notch noises emitted from contestants this season, and – for the purposes of a post that hardly anyone is likely to be interested in, yay! – I’ve selected five of my personal favourites (contestants, not noises) to officially nominate as potential Aussie flag-flyers in Stockholm. SBS, take note. 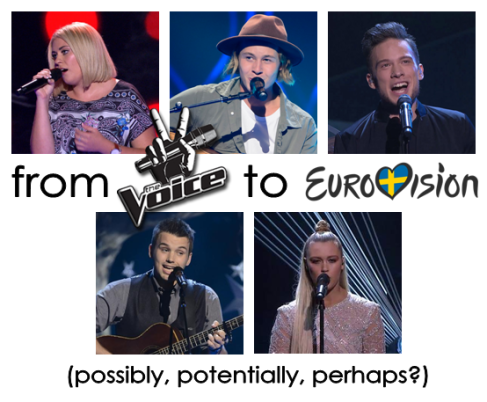 FYI: For some reason, videos from The Voice Australia are few and far between on YouTube, but I’ve done my best to source semi-reasonable ones. If you’re (miraculously) interested in watching more/better performances from the following possible Eurovision representatives, you can do so here.

Ellie won The Voice on Sunday night, which didn’t come as a surprise. Coach Jessie J spent the entire season banging on about how amazing she was for her age, and though that did make me think ‘Whatever…you ain’t seen nothing, Jessie, until you’ve sat through any given edition of Junior Eurovision’, I still think Ellie’s got something special. She’s a little Lorde-like to listen to, but not overly-so, and she’d definitely give more of a Nadav Guedj-level performance (i.e. confident and competent) than a Michele-and-Anita-level one (i.e. deer in the head/stage lights) if she ever took to the ESC stage. Interesting is the key word here.

The Eurovision entry would be…intense and unique without a hint of polished pop princess-ness, like Lena’s Taken By A Stranger; or cool and offbeat like Loïc Nottet’s Rhythm Inside (as you might have seen in the video above, Ellie’s already taken style inspiration from Mr. Nottet).

We’ve never heard a voice like Nathan’s on the Eurovision stage, and I’d not-so-secretly love us Aussies to be the ones who put it on the table. This guy is also not far out of the JESC age range, and though I know the Eurovision demographic isn’t largely comprised of tween girls, he’d easily snap up the votes of any tween girls who do happen to tune in. Based on looks, you might expect him to have a voice like Justin Bieber’s (or like the scarecrow from The Wizard of Oz) but that’s not the case. What he does have is pipes that strike a perfect balance between weird and wonderful.

The Eurovision entry would be…understatedly staged and stripped back in sound, like John Karayiannis’ One Thing I Should Have Done. That’s if it wasn’t another slightly-bizarre-but-still-enjoyable reworking of a Taylor Swift song that somehow managed not to breach Eurovision’s ‘original song’ rule…

This man was born to be on a stage of some kind – preferably in a theatre, but a ginormous fibreglass number in one of Europe’s most distinctive arenas would do just fine. He has enough personality to pull a Donny Montell and fill up said ginormous stage all on his own, and his falsetto has the power to shatter the Eurovision trophy if it’s kept within a five-mile radius (be warned, SVT). Also important to note is that Caleb looks great in a white suit – and we all know how much of a good-luck charm white can be in the ESC. How else do you explain Azerbaijan’s 2011 victory?

The Eurovision entry would be…a big belter of a man-ballad, like Axel Hirsoux’s Mother (but not creepy); or something anthemic that let him show off a bit, like our reigning champ Måns Zelmerlöw’s Heroes.

The Voice runner-up Joe is British, and a busker by trade, but he’s no stranger to Aussie TV audiences: he finished fourth in the 2012 season of Australia’s Got Talent. That is because, duh, he’s got talent. I was backing him to win on the weekend, and the fact that he didn’t takes nothing away from his unique sound, emotive performances and general adorableness. Sadly, he’s probably the least likely of these five acts to say ‘HELL TO THE YEAH!!’ if approached about Eurovision. But in this fantasy land of mine that I’m currently touring you through, that’s not worth thinking about.

The Eurovision entry would be…all about simplicity, authenticity and raw talent, like Tom Dice’s Me and My Guitar. There would be no wind machines or pyrotechnics involved. Well…maybe a fire curtain for the final chorus. A subtle, classy, TWENTY FOOT HIGH SHOWER OF SPARKS WITH UNICORNS FROLICKING UNDERNEATH IT.

Lastly, because every country should have the chance to send a pop princess…here’s Her Royal Highness Lyndall. Can she sing? Obviously. Can she dance? Absolutely. Can she do both of these things at the same time, while wearing high heels? Like she took lessons from Ani Lorak herself (which she actually may have done – as a gymnast, she probably has a sizeable Ukrainian network). This girl is pretty versatile, so as a song contest participant, she could stroll down Dance Banger Drive or swing by Ballad Boulevard without breaking a sweat.

The Eurovision entry would be…fun, infectious pop like Getter Jaani’s Rockefeller Street; or an ambitious ballad like Aliona Moon’s O Mie, minus Pasha Parfeny on the piano (sadface).

Of course, if none of these artists are willing and able to make the trip to Sweden, Australia could always opt for The Voice coach, goddess amongst mere mortals and our version of Sanna Nielsen, Delta Goodrem…

…but more on that in a future post, if you guys are still around to see it. Please come back. I promise I’ll up the Eurovision content next time. 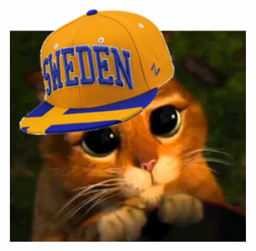 PS – What do you think of ‘The Voice’ as a one-stop shop for selecting Eurovision reps? Is there anyone on the show, anywhere in the world, who you think has ‘Eurovision 2016’ written all over them?

3 Responses to “Not quite a million voices: Five finalists from The Voice Australia 2015 who could fly the Aussie flag in Stockholm (if we’re invited…)”