It’s Wednesday, in case you hadn’t noticed, and on this particular Wednesday, the countdown to the ESC 2015 submission deadline is on!

In less than one week, all forty participating countries must have their s#%t together – at least to the point of handing their entries over at the Head of Delegations meeting. Did you hear that, Russia? If you don’t want a repeat of last year when you made the deadline by a babushki’s whisker, you’d better get Polina Gagarina’s song sorted STAT.

I for one am struggling, waiting to hear the songs still under wraps (Israel and San Marino are causing me actual, physical pain). In case you’re feeling the same way, I thought I’d offer a distraction in the form of something totally unrelated: another Retro Ranking! I recently ranked the Dublin 1997 contest for your reading pleasure (hopefully) and as I’m in a chronological mood today, I’m going to plod on with Birmingham 1998.

The last time the United Kingdom played host to Eurovision, Terry Wogan was co-emcee, Ulrika Jonsson fell victim to the noise level in the auditorium and Dana International took her sweet time changing outfits and getting back to the stage for her winning reprise. In amongst all of that were performances of 25 songs – songs that were, as is always the case in the ESC, good, bad and ugly (though being 1998, the ‘ugly’ really just refers to some of the costumes).

Watch this recap of the Birmingham entries if you need a refresher, check out my rankings below, then comment me with your favourites from the Class of ’98! You know you want to.

#1 | The Netherlands (Hemel En Aarde by Edsilia Rombley) – Before she was On Top of the World in Helsinki (until she failed to make the final, that is) Edsilia moved, grooved and flawlessly key-changed her way through this irresistibly catchy number in Birmingham. There is nothing that doesn’t work for me in her performance – 90s fashion notwithstanding – from her smooth and soulful vocals to the cute bits of choreography she does with her backing singers. Hemel En Aarde itself, though, is the pièce de résistance: three minutes of happy, funky pop that I could never get tired of.

She may have had the same haircut as most of her competitors, but Edsilia was superior in every other respect.

#2 | United Kingdom (Where Are You? by Imaani) – Ah, remember the days when the UK couldn’t stop being a Eurovision success? No? Me neither. I was six-going-on-seven and had no idea what an ESC was when Imaani leapfrogged over Chiara into second place (at the very last moment) on home soil. Fast forward to 2015, when just getting on the left side of the scoreboard is a major achievement for the UK, and I now not only know what an ESC is (and then some) I also think Where Are You? is one of the strongest host entries ever. While very 90s in nature, it’s aged pretty well. The mixture of dance music and Imaani’s R & B-suited voice is powerful, and I don’t mind that the song is repetitive because again, it’s catchier than chicken pox.

#3 | Sweden (Kärleken Är by Jill Johnson) – I’ll admit, I thought this was a bit bland at first. But over time, I’ve grown to absolutely adore it, if I may gush without you rolling your eyes and/or retching. Written in response to the death of Princess Diana, it’s a song with emotional weight that you can feel especially in the choruses. It’s almost an anti-Diva, being so soft and understated, and I just wish Jill’s outfit had been chosen to match. The head-to-toe black and giant platform heels were more ‘castoffs from Alla Pugachova’s seemingly drunken performance at Eurovision 1997’ than ‘pretty, sentimental ballad’. 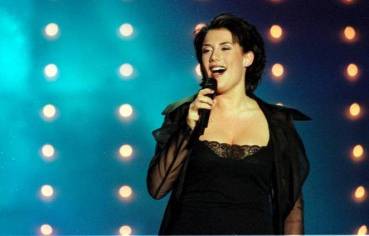 In case anyone died during her performance, Jill went all black to ensure she could go straight to their funeral afterwards (I assume).

#4 | France (Ou Aller by Marie Line) – This entry did not fare well in the contest, and I can only put that down to the voters and jurors having extremely poor taste in music. Or, you know, people just having different tastes to my own. Oui, Marie Line says ‘ou aller’ about six hundred times in 180 seconds, and oui, the song doesn’t build up to much…but I love the sound anyway. It’s a throwback to earlier on in the decade, and makes me think of Ultra Naté and Sonique. That in turn reminds me of my primary school socials, and they were good times. Très, très bien.

#5 | Ireland (Is Always Over Now? By Dawn) – There’s not that much difference between this song and any number of the insipid love-related ballads Ireland sent to Eurovision in the 90s and early 2000s. Yet there is something about Ireland ’98 that appeals to me. Dawn isn’t a man with a questionable haircut and an ill-fitting suit, which sets her apart a bit (she’s a woman with both of those things) and Is Always Over Now? is more pop and less lame/depressing than most of those man-ballads. Random query: is it just me, or does Dawn look like Kelly Clarkson?

#6 | Portugal (Se Eu Te Pudesse Abraçar by Alma Lusa)
#7 | Estonia (Mere Lapsed by Koit Toome) – They did reasonably well with a sleepy ballad the year before, so I guess Estonia’s thinking here was ‘if it ain’t broke, don’t send a dance banger.’ Mere Lapsed could easily put you to sleep, which to some would be a blaring indicator of boringness. To me, it’s melodically nice enough to set up camp outside of vanilla territory. Cruisy, easy listening like this can be a welcome vacation from the Dancing Lasha Tumbais of the world.

#8 | Cyprus (Genesis by Michael Hajiyanni)
#9 | Malta (The One That I Love by Chiara) – Chiara reached the bronze medal position for Malta in her first of three Eurovision attempts (and don’t think she won’t be back for more!). She did so with what I think is her best entry…on those days where I’m not leaning towards Angel. It’s always her voice that’s the star of the show, so much so on this occasion that you hardly even notice how hideous her snot-coloured suit-dress-thing is until she’s stopped singing.

#10 | Poland (To Takie Proste by Sixteen)
#11 | Israel (Diva by Dana International) – I believe there were stronger songs – and definitely stronger vocal performances – in Birmingham than what Israel provided. Diva is a decent track and a high-energy winner, but I it’s worn thin with me over the years thanks to self-inflicted overexposure. Dana herself, however, is fabulous personified and will never be passé.

The flamboyance of the feathers or this spangled silver number? No wonder Dana had a hard time deciding.

#12 | Croatia (Neka Mi Ne Svane by Danijela)
#13 | Switzerland (Lass’ Ihn by Gunvor)
#14 | Germany (Guildo Hat Euch Lieb by Guildo Horn) – Never trust anyone who voluntarily wears crushed velvet. If they’ll do that, they’ll do anything, including scale the Eurovision stage as part of their act. I suppose that’s just gravy on top of an already ridiculous package feat. a wild mane of hair, the world’s thickest eyebrows, and Guildo (owner of said mane and brows) getting up close and personal with some (un) lucky audience members. The man could barely be called a singer, but you have to admire his showman qualities. He got the crowd going like nobody else.

#15 | Greece (Mia Krifi Evesthisia by Thalassa)
#16 | Finland (Aava by Edea) – Instead of using the Secret Garden approach of taking a few words and repeating them twice, Finland took a few words and repeated them for more or less the entirety of their allotted three minutes. It didn’t do them many favours. Still, there’s appeal in the mystical, folky vibes of Aava.

#17 | Norway (Alltid Sommer by Lars Fredriksen)
#18 | Spain (¿Qué Voy a Hacer Sin Ti? by Mikel Herzog) – ‘Mikel Herzog’ is clearly a stage name, because, unless I am much mistaken, this was Harry Potter representing Spain. It’s a shame Ron and Hermione didn’t help him pick out a more interesting song. 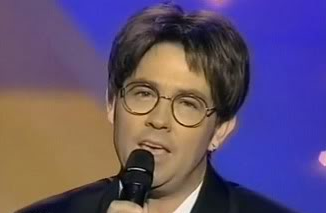 #19 | Turkey (Unutamazsın by Tüzmen)
#20 | FYR Macedonia (Ne Zori, Zoro by Vlado Janevski)
#21 | Slovenia (Naj Bogovi Slišijo by Vili Resnik) – There were so many overly-dramatic ballads like this in 1990s contests, it’s hard for any in particular to stand out. This one’s not terrible, but it’s certainly not my cup of tea.

#22 | Romania (Eu Cred by Mălina Olinescu)
#23 | Slovakia (Modlitba by Katarína Hasprová)
#24 | Belgium (Dis Oui by Mélanie Cohl) – How on earth this made the top 10 is a mystery to me. I find it unbelievably irritating, in large part thanks to Mélanie’s grating vocals. You want me to say yes? I don’t think so. Quelle horreur!