Once upon a time, there was a girl from Australia who had a blog devoted to the amazeballs Eurovision Song Contest, and she loved to post hilarious articles there on a very regular basis. Then, one January – a month usually peppered with selections for ESC entries – she found herself faced with four weeks of emptiness, with barely a national final to be seen anywhere. But, rather than leaving her blog as empty as this January, she made a vow to herself that she would fill it with many more hilarious yet random posts to entertain all one of her readers, up until February when NF madness was scheduled to resume.

Yeah…that didn’t work out too well, did it?

I know this because the aforementioned Australian girl is me (I bet you didn’t see that coming) and I’ve had such a chaotic start to 2014 that I haven’t graced this blog with my presence for more than two weeks. That’s like, six months by my standards. For that, I apologise to a totes cray extent, and to anyone who does not follow me on Twitter (where I have actually made an appearance over the last fortnight) and thought I was dead, I’m also very sorry. I’ll send the sympathy cards and floral wreaths back ASAP.

I want y’all to know that I am back with a vengeance and pumped to cover the upcoming craziness of February, beginning with the finals of Finland and Switzerland and the first semi of Sweden’s Melodifestivalen (!!!) all happening this coming Saturday. So I hope you’ll join me for the season, and if you’re doing something similar, let me know so I can join you back. It’s all about #JoinUs this year, remember?

Now that the crappy excuses and apologies are out of the way, allow me to introduce my penultimate non-NF-themed post.

Recently, Slovenia became the final country to confirm that they’ll be in Copenhagen, taking the total of competitors up (or should I say down?) to 37. It’s been a year of casualties, with not one, not two, not even three, but FOUR countries withdrawing – Bulgaria, Croatia, Cyprus and Serbia. On the plus side, we are welcoming two countries back into the family, with Poland and Portugal returning after brief breaks. But it’s Slovenia I want to focus on today, for without them, we’d be sitting un-pretty at 36 – which sounds a lot less impressive than 37.

So to thank Slovenia for obeying the command to #JoinUs, I’m devoting a whole post (minus this super-long intro) to their time in the ESC. Since 1993, they’ve had more than their share of musical misfortune, but there have been some diamonds amongst the rough. Here are the Slovenian stats, and my picks of their bunch.

Cvet Z Juga by Alenka Gotar (2007). Before Krassimir Avramov and Cezar, there was Alenka (and before Alenka, there was Sertab Erener opening the 2004 final, but let’s not get into that now). Alenka lent her operatic vocal to a mystical, dramatic and eventually thumping ethno-dance number that had me at hello – or at least, the first word of Slovene. Even if the wind-machine heavy, palm-lit performance is discounted, I love this entry, and I guess I’m not alone – it’s one of only two Slovenian songs to qualify since the introduction of the semi system.

Narodnozabavni Rock by Ansambel Žlindra & Kalamari (2010). ‘Narodnozabavni’ is a fun word to say, but that’s about the only plus to this unfortunate hybrid of folk and rock. I can’t help thinking a straight folk song would have been infinitely better, because not only did the two genres not mesh pleasantly in this instance, but the rock dated the whole thing by about thirty years.

For A Thousand Years by Darja Svajger (1999) – known for that line, which in Darja’s accented English sounded like “I trample in your arse”. I really hope she doesn’t.

Samo Ljubezen by Sestre (2002) – the song was fine. Quite catchy, but not that notable. It was the three men in glittering flight attendant outfits singing it that made things interesting. 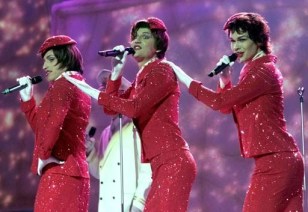 Sestre pulled off red lipstick better than I ever could.

Stay Forever by Platin (2004) – depending on how you feel about PDAs on the Eurovision stage, this was either sweet or gross. Personally, I like this song, and the smooch was an understandable warm-up for the wedding these two apparently had a few days later.

No One by Maja Keuc (2011) – with this killer song, that killer voice and those killer boots, I wouldn’t want to cross Maja.

Verjamem by Eva Boto (2012) – many fans labeled this Molitva 2.0, but I think it captures the best aspects of 2007’s winner. A.k.a. the mystique, atmosphere and snazzy costumes.

Straight Into Love by Hannah (2013). I think Slovenia stepped up the staging with this one. It was slick, contemporary, and in no way did those metal masks remind me of Vrag Naj Vzame. As a former taker of dance lessons, I always pass judgment on choreography, and the dance moves that Hannah’s man posse busted were top-notch. A nod of approval also goes to the lighting guy/gal, who lit this to perfection. All in all: #NAILEDIT.

Maja Keuc. The girl was walking fierceness in her metal-plated, chain-covered minidress, accompanied by leather accents, including those infamous boots. I don’t know how she managed to walk or sit down, let alone strut around the Düsseldorf stage the way she did, but I do know she would have been well prepared for a sexy battle with all of that body armour on. 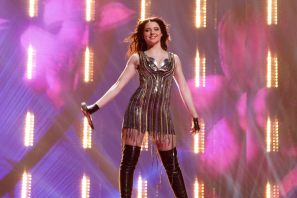 No fridge magnet was safe with Maja on the scene.

Darja Svajger/Alenka Gotar/Maja Keuc. Slovenia almost rivals Ukraine as the sender of powerhouse female vocalist (if not in a string of successful results). Despite her accent issues, two-timer Darja delivered one heck of a ballad, with the humbler notes and epic screamers coming equally as easy to her. Alenka took things to a new level – as in a key so high it had never been heard by the human ear before – and somehow made it pleasurable. And Maja proved herself the Slovenian teenage version of Christina Aguilera with her pitch-perfect performance of the tricky (as it is when I attempt to sing it in the shower) No One. They’re all pretty different voices, so I can’t pick between them, but sharing #1 shouldn’t be a problem for a country that’s never made the top 5 IRL.

So that’s Slovenia, 1993-2013, as I see them. Well, me and the official numbers. I wonder what they’ll serve up for Copenhagen? Being the last country to say oui may give you the impression that it was an “oh, alright, I suppose we’ll be there” kind of decision, rather than a well thought-out one. But the fact that they’re going ahead with the old faithful NF EMA says otherwise. Perhaps they just wanted to keep us all in suspense so we’d realise how much we’d miss them if they withdrew…though apparently, the real reason was stalling so they could look under their collective couches and scrimp together the loose change needed to fund participation.

All that really matters in the end is that magic number – 37. It may not indicate that the ESC is getting bigger every year, but it is at least a solid number that’s giving us two substantial semi-finals. Don’t be depressed about it. Make like Ping Pong, and *sings tunelessly* “ooooohh ohhhhh, be HAPPY!”.

Let’s talk Slovenia. Whether it’s highlights, lowlights, or expectations for 2014, I want to hear them!

NEXT TIME: In my last post before the madness of February begins, I’m traveling back in time to rank the Class of Riga ’03…and just to warn you, Jemini are NOT getting zero points from me.