A little while ago, we learnt that the upcoming ESC would be a battle between 39 countries, though I think I can speak for us all when I say we were hoping to break the record of 43 set in Belgrade and Düsseldorf. We would have, if it wasn’t for Bosnia & Herzegovina, Poland, Portugal, Slovakia and Turkey all RSVP-ing with a big fat ‘NO’.

To me, there are two countries in that rolecall that do not fit. Is Poland one? Nope. I was half expecting them to return, but wasn’t shocked when they didn’t. Portugal? Not really, with the run of “luck” they’ve had of late. And Slovakia? Well, we’re all well acquainted with the game of hokey-pokey they like to play with Eurovision every year.

No, it’s Bosnia & Herzegovina and Turkey who flabbergasted this fan when they declared, within hours of each other, that they would not be gracing Sweden with their presence. It was one blow after another that fateful evening, and I’ve been a little depressed ever since. But instead of continuing to mourn the losses in 2013, I thought I’d celebrate the time of both nations in the contest – both for my benefit and for any of you who are already missing one, the other, or both. Read on (if you want, no pressure) and cross your fingers that a miracle will see at least one of them onstage in May.

Lejla by Hari Mata Hari (2006)/ Bistra Voda by Regina (2009). I couldn’t choose between them if my life depended on it, so it’s a good thing it doesn’t (as far as I know). Sure, they were #3 and #4 respectively on my all-time ESC 50 countdown, but little did you know that meant I love them equally. Both give me goosebumps no matter how often I listen to them – it’s the magic of Lejla and the drama of Bistra Voda, I think. Plus, both were performed faultlessly. Bistra Voda in particular should have placed higher.

Ne Brini by Mija Martina (2003). I just find this so unoriginal, which is out of character for most Bosnian entries. The fact that there was no Bosnian-ness about it also does nothing for me. As the Dutch commentator said that year, it’s pretty much Tom Jones’ Sex Bomb, but I doubt anyone would throw underpants onto the stage for Mija.

Sva Bol Svijeta by Fazla (1993) – a poignant reminder of war-torn Bosnia, composed by the one and only Dino Merlin.

Pokušaj by Laka (2008) – both originality and madness levels were high in this one, and that’s why we loved it.

Love In Rewind by Dino Merlin (2011) – looking back, my favourite song of the year, and yet more magic from the aptly stage-named Merlin.

Lejla. A good stage show doesn’t always consist of mile-a-minute choreography and pyrotechnics so forceful that the first three rows of spectators get their eyebrows burnt off. Sometimes, clever lighting, subtle movements and the perfect backdrop to set the scene (as well as spiffy white outfits) are all you need to get the ‘wow’ factor.

Marija Sestic (2007)/ Regina. I have professed my love for Marija’s dress before, but it’s worth declaring again. And Regina’s elaborate militaristic getups couldn’t have been more suitable. 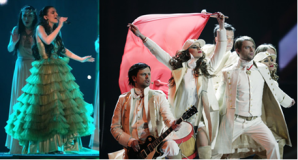 Their best vocalist/s: Hari Mata Hari. As I said, faultless. No other adjectives are necessary.

I don’t know about you, but just getting all nostalgic over B & H has got me missing them even more, from a contest that hasn’t even been held yet. If anybody out there has the power to get them to Eurovision this year, speak now or forever feel my wrath (seriously, I’m going to come back from the dead and haunt you). Sarajevo 2014 has such a nice ring to it, it would be heartbreaking to go into Malmö knowing there’s no chance of it being bandied around for the next twelve months.

Before I actually break down and start sobbing into my keyboard, let’s move on to the other shock withdrawer – a country that has had mixed fortunes over the years and that it is pointless writing clues about because you’re well aware from my title and intro which one it is.

Everyway That I Can by Sertab Erener (2003)/ Deli by Mor ve Ötesi (2008). I’m yet to come across someone who doesn’t love Sertab’s winning song. It’s the perfect fusion of ethnic and pop and never seems to date. And Deli is probably my favourite Eurovision rock song. I’m not really a rock music fan, but somehow this is right up my street.

Superstar by Sibel Tüzün (2006). I don’t detest it, but it’s such a strange song, and I’m not quite sure how it managed to qualify. The high-pitched shrieks in the chorus are not kind on one’s eardrums. Bana Bana by Pan (1989) is also not dreadful, but annoying.

Dinle by Sebnem Paker & Grup Etnic (1997) – a fan favourite that probably should have beaten Ireland.

For Real by Athena (2004) – this is one of my most-loved songs from Turkey, and one of the best host entries of all time (not even Kanye West could change my mind about that). Three minutes of epic ska fun.

Düm Tek Tek by Hadise (2009) – ethno-pop is one of this country’s various fortes. Hadise’s vocals weren’t the best, but her song was a cracker.

We Could Be The Same by MaNga (2010) – this was my top song of Oslo at the time, and gave Turkey their best result since Sertab’s win.

Love Me Back by Can Bonomo (2012). You can never dish out enough praise for costumes that become props, and then go back to being costumes. And then become props again! The nautical theme wasn’t too understated or OTT, and the choreography was entertaining. Can’s charisma rounded things off nicely.

Kenan Dogulu (2007). The credit goes to him for the striking red coat and Colonel Sanders bow tie, and to his backup dancers for their big hair and gold hardware. Even though the actual credit should go to the wardrobe and hair people.

Sedat Yüce (2001). A dramatic ballad like Sevgiliye Son needs a decent vocalist to carry it off, and luckily, Sedat fit the bill.

Yep, it’s going to be a strange year if Turkey are 110% out. The most irritating thing about their sudden withdrawal was that, up until that point, there was a flesh-and-blood artist in talks with the powers that be to represent them in Malmö. I have to wonder when exactly it was decided that they were going to give the show a miss. Hopefully before that artist had phoned his ailing grandmother to tell her the wonderful news, news that cured her Alzheimers, arthritis and terminal pneumonia.

What have been your Eurovision highlights from B & H and/or Turkey?