I don’t know why, but seeing someone who looks like someone else is always fascinating. Have you ever wondered if somewhere out there, there is a person who looks at a face exactly like yours in the mirror every day (hopefully not recoiling in horror as they do so)?

I have, and I’ve come to the conclusion it’s Drew Barrymore.

Anyway (and please stop laughing!) the look-alike posts I’ve done in the past have proven quite popular, but they’ve all focused on big Eurovision – which has nearly sixty years’ worth of familiar faces to identify. Seeing as it’s JESC month, and with JESC there is not half as many faces to scour through, I figured it was time for the doppelgangers of mini Eurovision to be exposed…once and for all, mwahahahaha and all that jazz.

So without further ado, I present to you the kids who were obviously separated at birth from (or are related to, which would explain the massive age gaps) some people you may recognise. 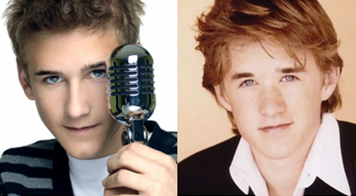 Let’s face it, the only difference between them is that Haley Joel sees dead people, and Dani (as far as I know) doesn’t. It might have come in handy for him to have a sixth sense though, as he could have avoided turning up to JESC in the same outfit as the boys from Belarus and Croatia.

I haven’t seen much of Lina since Rotterdam, so it’s possible she actually IS Heidi Klum. It happens all the time – German models masquerading as Lithuanian child stars (in fact, I’m 99% sure Paulina Skrabytė was Claudia Schiffer).

It’s like Lindsay Lohan’s characters in The Parent Trap – separated at birth, one taken to live in Russia and the other Hollywood, Alexandra and Abigail will eventually be reunited at summer camp after a fencing match, and then scheme to get their mum and dad back together. You’ll see.

Here is a pair of child prodigies who could be mistaken for twins if Charlotte was still a teenager, Ilona put on a convincing Welsh accent and the person making the mistake had left their glasses at home. It could happen. 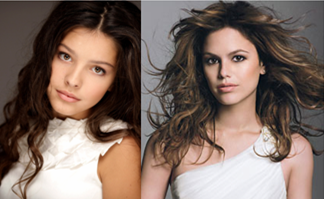 They’re both brunette, they both like to wear white, and they both have an ‘R’ in their names. That’s really all the evidence you need that these two are sisters from another mister.

I’m sure Jill, like any other person, would be horrified to learn that she resembles Pointless Paris. Then again, she doesn’t have to achieve much in her life to prove that’s only skin deep. Just getting a job should do it.

Her nickname is Baby Gaga, so it’s no surprise that Mariam draws constant comparisons with the Queen of Steak Couture. The dress she wore for her Junior performance of Mari Dari was clearly inspired, right down to (or technically, right up to) the headpiece, by the real Gaga’s famous Hello Kitty-studded gown.

I realise I haven’t cobbled together the most persuasive graphic to illustrate my case, but you have to admit Bartas could look less like this fifth of 1D. I mean, I’ve never actually been told I look like Drew Barrymore (sad face) but I’m not that far off. You know? Just squint at this picture and you’ll get it.

I can see it now: in twenty years Dalita will be starring in a Sex and the City reboot which will mainly involve her striding through the streets of New York, arm-in-arm with Lerika (the Miranda), Maria Isabel (the Carrie) and Victoria Petryk (the Samantha).

How did you rate my list of JESC look-alikes? Who do you think I missed?

NEXT TIME: The penultimate Junior recap goes live, and then it’s time for the first half of my 2012 reviews. Watch out Albania, Armenia, Azerbaijan, Belarus, Belgium, and Georgia…I’m about to give you a serious once-over.