I want to start this post with a) an apology for its lateness, and b) a brief mention of what could very well be the best thing about the upcoming Junior contest. The 2012 logo was released last week and looks a little something like this:

Actually, it looks exactly like that, because that is it. Anyway, it wasn’t a shocking revelation, with this year’s motto being ‘break the ice’ and all, but as it could have been on a par with the 2012 Olympics logo (i.e. what the #!&%?) it was a pleasant one. In my opinion, it’s very cool, pun 110% intended.

Moving on, and it’s time to look back at the 3rd JESC – the only contest  to have been held in Belgium in my lifetime (what are the chances that will change in 2014?). For some reason, this edition is the one I’m least familiar with. I can’t tell you how many hours I had to spend on Youtube refreshing my memory (oh, the torture!) but I can tell you that I’ve finally managed to put together a recap for your enjoyment, fingers crossed.

And here it is…

United Kingdom/ How Does It Feel? by Joni Fuller

Belarus/ My Vmeste by Ksenia Sitnik

(Please forgive the lack of actual fives in some areas, for the third time.)

Spain – once upon a time, Spain did Eurovision in a certain way and it never failed them. Think David Civera, Rosa, Beth, Ramon…and Antonio José. Ethnic and epic.

Belarus – it’s cute, it’s catchy, it’s about togetherness and stuff…what more could you want in a JESC entry? Or in an advertising jingle for summer camp, come to think of it. For me, this is the best of the Belarussian winners.

Norway – this one’s very kiddish, but I still love it. There’s more cuteness and catchiness, but this time it’s concerning school holidays, and that’s a topic I can get behind even though school is a thing of the past (woohoo!).

Netherlands – Dutch JESC ballads kick butt in my opinion. In fact, most of their Junior entries get douze from moi, whilst their big Eurovision efforts leave a lot to be desired.

Romania/Belgium/Macedonia – I can’t split them! I love the energy of Romania, the happiness of Belgium, and pretty much everything about Macedonia.

Greece – this goes more to Kalli than the David Schwimmer-esque Alexandros. But there’s a weak link in every duo, isn’t there? Just ask Ell and Nikki.

Romania – her song seemed to be 10% singing, 90% exuberant shouts of ‘HEY!’, but Alina made it work. She’s an even better vocalist nowadays, but no longer sports those braids (to my knowledge).

Croatia – Lorena obviously failed to live up to the standard her brother set for her re: The Scoreboard, but it’s clear that vocal talent runs in her family.

Netherlands – there was nothing Stupid about Tess in the tune-belting department.

Romania – the combo of red and white is always (well, almost always) a winner. Put it together with traditional elements and some gravity defying, forehead-tightening braids, and voila – perfection.

Belgium – happy and bright…kind of like Lindsay’s song, which makes sense. A special thumbs up goes to the coordinated backup dancers.

Netherlands – this is how you do casual without resorting to sportswear.

Greece – again, it’s mainly Kalli who gets the accolades, this time for Best Cut-Out Garment and Most Impressive Hybrid of Straight ‘n’ Curly in a Hairdo. Congrats. 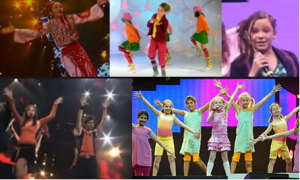 Sweden – it’s just so noisy! To me the chorus sounds like two girls who are trying to sing karaoke in their living room, but their mother keeps drowning them out because she’s in the kitchen throwing her pot-and-pan collection at the wall.

Malta – the lyrics are really what bug me here. At least when you don’t understand most of the languages that are being performed in, you can’t tell how clichéd the words are.

Denmark – yeah, it came 4th. Yeah, that means most people liked it. No, that doesn’t mean I’m not allowed to find it too staccato.

UK – sometimes, good voices can make bad songs sound better. Other times that can be reversed, with disastrous results.

UK – with Joni, it’s not so much a case of ‘she can NOT sing to save her life!’ as ‘what the heck is she doing with that voice of hers?’

Norway – I love Malin and her JESC entry, and when she performed in the Norwegian national final this year it was clear her voice had matured. But back in ’05, she was very nasally.

Croatia – I may have worn something similar when I was a kid, but I recognise the hideousness of it now.

Belarus – visor hat. Tutu. Legwarmers and giant shoes. Where could it go wrong?