There are just under nine weeks until Junior Eurovision 2012 (!!!) and for as many ESC fans that don’t give a backup dancer’s sequined hotpants about that, there are those a la moi who can’t wait (and also wish the majority of countries who haven’t picked their entries yet would get a move on, so they can like, write reviews and stuff).

That’s an assumption, obviously, not a scientific fact published in Random Musings of Song Contest Maniacs Monthly. My point is that if you aren’t a JESC lover, that’s okay –but you should probably step away from your internet-enabled device for now and come back later when my focus is big Eurovision. For those who do enjoy it, I have some great (some would say) things lined up for you over the next few months, starting right now with the first installment of a special countdown.

When Junior began I was twelve, and as a result of that, and the fact that I didn’t even know what ‘ESC’ stood for at that point, the details can be a little fuzzy when I look back on it. So to remind myself as well as you guys of the inaugural edition as we approach the 10th, here’s a recap of what went down…and my thoughts on the best and worst in show.

Where: The Forum Copenhagen, Denmark

Interval act/s: Sugababes with Hole In The Head and Busted with Crashed The Wedding

United Kingdom/ My Song For The World by Tom Morley

Sweden/ Stoppa Mig by The Honeypies 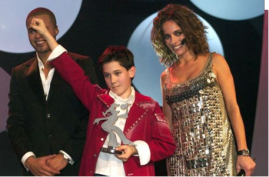 Dino celebrates his win by punching Remee in the face

(Please excuse the lack of fives in some areas, where I just couldn’t muster up the numbers.)

Croatia – you’ve got to love a slow piano intro that gives way to, well, something a lot less slow and piano-y, especially when that something is super catchy. I still can’t believe an eleven-year-old wrote this.

UK – It’s funny that in the same year they came dead last (and with zero points) in the ESC, the UK managed to come third in Junior. What was their secret? A kid who could sing, for starters, and his cracking message ballad. The chorus actually makes me tear up a little. You know, if I’m feeling vulnerable.

Denmark – a Middle Eastern-flavoured song is pretty much guaranteed to win me over, as the host country did in ’03. This has got to be one of my favourite JESC entries of all time, and not just because I can belly-dance to it without feeling (too) stupid.

Spain – I don’t think this ballad was quite as good as the UK’s, but there’s something magical and so-very-Spanish about it that gets me. Performed by someone old enough to operate a motor vehicle, it could have done well at the ESC too.

Belgium – I used to dislike this, and I have no idea why. All I can say is shame on you, Jaz of the Past! X!NK remind me a bit of interval act Busted, who I may or may not have had a poster of on my wall ten years ago. They are purveyors of good, soft-punk-rock.

UK – no small child yelling into a mike, Tom could properly belt one out.

Croatia – Dino: can write, can sing. Can also pull off outlandish jackets with the best of them (a.k.a. Ralf Mackenbach).

Netherlands – Roel was a senior citizen compared to the rest of the participants, and his experience was reflected in his vocal ability.

Macedonia – Marija and Viktorija are probably the most vocally proficient twins ever to take to a Eurovision stage. And they AREN’T EVEN TWINS!

Denmark – pretty, age-appropriate outfits that were well suited to the song.

Croatia – as I said before, and as you’ll see as the countdowns continue, I am a huge fan of bright jackets.

Belarus – nice use of colour.

Macedonia – I applaud the epicness of the flared pants, if nothing else.

Sweden – these days Sweden is one of my favourite JESC countries. Let’s just say it took a few years for that to love to develop.

Romania – I don’t hate this song, I just find it a bit yell-y. If I have even the slightest headache, forget it.

Malta – again, there’s nothing terribly wrong here. It’s just too bland and cliché for my taste.

Greece – one of the least appealing of a strong bunch. Don’t love it, don’t hate it.

Cyprus – sweet but boring. Like a cupcake without icing, or Buranovskiye Babushki without the little granny.

Greece – I think the Greek delegation confused the ‘s’ in JESC for ‘shouting’.

Romania – as I said, ‘yell-y’ is the key word here (despite it not actually being a word).

Greece – sponsored by a sportswear/tartan manufacturing company much?

Enjoy the recap? What were your personal highs and lows of Copenhagen 2003?

4 Responses to “Counting down to JESC: Copenhagen 2003”