Surprise, surprise – it’s Saturday again! Since last weekend we’ve seen three Eurovision 2020 songs be chosen and two more be presented, and this weekend is almost as action-packed. Three finals and two semis are on the way, and here’s the roll call:

*Poland = saving themselves for Sunday night.

I’m a little short on time this week, so I’ll be covering even less than my usual lazy, Scandinavian-prioritising self (own your flaws, people). Let’s have a look at the latest additions to the Rotterdam lineup, and see what Sweden’s lucky last semi has to offer.

What went down this week?

A handful of things, as you already know/I’ve already mentioned. We’re currently sitting on 11 selected and/or released entries for Eurovision 2020, which isn’t a whole lot considering we’re nearing the end of February. But all that means is we need to prepare for the tsunami of incoming songs from all the countries yet to join Albania, Armenia, Australia, Belgium, the Czech Republic, France, Italy, Latvia, Lithuania, Norway and Spain at the done-and-dusted stage.

Saturday gone saw Depi Evratesil take place in Armenia. The show was a little lacklustre IMHO, and wouldn’t touch the country’s most recent JESC NF in quality terms. There were a few standouts though, and the winner was one of them. Former X Factor UK auditionee Athena Manoukian (who actually tried to represent Greece at Junior Eurovision once – the girl is multi-culturally inclined) will head off to The Netherlands in May armed with Chains On You. The song hasn’t been showered with love so far, but it’s turning out to be my personal guilty pleasure of this contest. Whether or not it can snap Armenia out of their two-year DNQ streak remains to be seen, but they should be grateful for their spot in the less competitive (on paper) second semi.

Lithuania had a much stronger bunch of songs to choose from than Armenia, and in the end THE ROOP romped in the win over Moniqué and Monika Marija. It was a landslide victory, and I can understand why. On Fire has the polish of Make Me Human and If I Leave, plus the pizzazz those songs are missing. It even has its own dance that we can all learn and then do in the arena/at home in front of our confused and frightened housemates. It isn’t topping my 2020 ranking at the moment, but it’s so fun, so quirky and so full of charm I can’t help getting a kick out of it.

Norway took us all on a rollercoaster ride, with an online voting fail causing the four gold finalists to be chosen by a backup jury instead of the Norwegian public. Things were fully functioning for the rest of the night, but the damage had been done – most likely to fan favourite Rein Alexander, who I’m 100% sure would have made the top two and challenged for the win if given the chance. Eventual winner Ulrikke was the other big hitter though, and she was my personal favourite. We’ll never know what would have happened if everything had gone according to NRK’s plan, but I can tell you that what did happen was me bursting into tears when Attention leapfrogged Kristin Husøy’s Pray For Me at the pointy end of the NF. I absolutely adore the song, and I’m very happy to have Mørland (plus 1/3 of A1, the second-greatest Norwegian boyband of all time who were once robbed of an MGP win) back on board the blinged-up Eurovision cruise ship.

Two internally-selected songs were released this week with varying degrees of grandeur. Belgium unveiled Hooverphonic’s track Release Me on Monday in low-key fashion, and while it didn’t grab me right away I’m pleased that the band has stayed true to themselves. It’s a high-class – if not that interesting to this Eurofan as yet – entry that works well as a sequel to A Matter of Time. That makes sense since it’s a) Flemish broadcaster VRT’s follow-up to Sennek’s entry, and b) also co-written by Hooverphonic’s Alex Callier.

The day before that, France made our jaws drop with a stunning song presentation direct from the Eiffel Tower (just in case we forgot for a second where the entry was coming from). Tom Leeb was looking and sounding glorious, and the whole thing would have been epic…if it wasn’t for the song. France, of all places, has taken a shopping trip to the supermarket of cookie-cutter Swedish pop and picked up The Best In Me, penned by Thomas G:son and John Lundvik among others (such as Amir, who like everyone else involved is better than this). It’s a song lifted straight out of Westlife’s back catalogue circa 2000, so naturally I’m not totally opposed to it – but this is France we’re talking about, Tom is not a member of Westlife, and it is not the year 2000. I’ll save all of the other stuff I’m dying to say for my review later on. For now just take in the beauty of the man singing this song (YES I’M SHALLOW, DEAL WITH IT) and the beauty of his location. The sound has been copyrighted, so that’ll be a plus for some of you.

Sweden: The Melodifestivalen roadshow moves on to Malmö

All too quickly, we’ve heard each and every one of the 28 potential Swedish entries for the year – in snippet form at least. Some have already been cut (ouch), others are in limbo waiting for next Saturday’s second chance round, and these seven are still awaiting their fate (am I making Melfest sound way more dramatic than it actually is?):

Some of us were expecting a winner – maybe even an ESC winner – to come out of this semi, but if anything things are now even more open. And sadly, this whole Melfest has been very 2013 (a.k.a. weak), which practically brings me to tears as an obsessive Swedophile. The only songs I’m really excited about are competing in Andra Chansen…so one of them could be the winner if this actually is 2013 all over again. I guess we’ll know in two weeks. 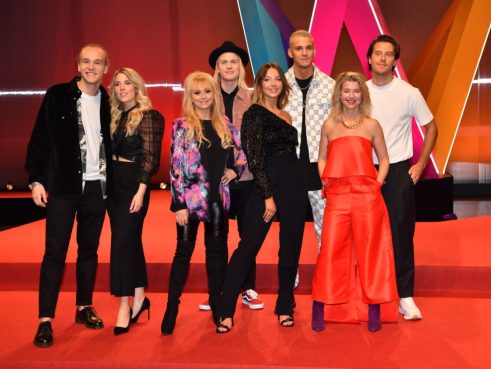 My favourite four Molnljus, Troubled Waters, Om Du Tror Att Jag Saknar Dig + Brave. William’s comp debut sounds like it could be a Darin album track, and that automatically makes me a fan…even if it’s too anonymous to be released as a Darin single proper. Victor Crone the Weatherman is back in Sweden, with another Avicii-inspired track that’s a little more complex than Storm but still pretty damn catchy (I have to laugh out loud every time he sings ‘storm’ though). Jakob’s song is basically a peppier version of Molnljus – I don’t like it as much but it has a nice vibe. And last but not least, the song of this semi has to be Brave. It’s not what I was expecting from Hanna and may not be a contender for the trophy, but it’s an earworm, she is fabulous and I’m excited to see how it all comes together as a package.

Have a Melfest prediction of your own? Of course you do! Make it in the comments and we’ll see who comes the closest to correct (spoiler alert – it’ll be you).

If you want to help a s!ster out and run me through your hopes for/psychic visions of all of tonight’s (and tomorrow’s) national finals – e.g. will Lake Malawi end up representing Poland just after the Czech Republic, hashtag awkward? – go for it. I’ve got to go, but I hope you enjoy whatever you choose to watch and survive this Super Saturday with your sanity intact.