Gamarjoba, Eurofans who do double duty as Junior Eurofans (if you don’t, then this is your warning to back away from this blog for a while). I’m 72% sure I just greeted you guys in Georgian, which is my way of getting into the spirit of Tbilisi’s first Eurovision event.

There’s less than two weeks until Junior Eurovision 2017, when adorable child/vocal powerhouse Mariam Mamadashvili will hand over the title of reigning contest champ to another pint-sized singing sensation (or four, if The Netherlands wins). That means it’s beyond time for me to start reviewing all sixteen songs competing on the 26th! So let’s breeze past the fact that I haven’t posted since the end of August (my bad…my very, VERY bad) and get this party started.

I’ve pulled four countries out of the special EBJ hat I keep in my closet for such occasions, and they are Cyprus, hosts Georgia, The Netherlands, and Poland (bet you didn’t see that coming. It’s not like I stuck them in the title or anything). Keep reading for my thoughts on Nicole Nicolaou’s I Wanna Be A Star, Grigol Kipshidze’s Voice of the Heart, Fource’s Love Me and Alicja Rega’s Mój Dom. Spoiler alert: one of them just might be my favourite entry of the year.

By the way…I didn’t have time to get an EBJ Junior Jury together this year, but I still wanted to be able to average out the score for each song based on a few factors. I’ve gone simplistic by awarding a standard EBU-regulation point score (1-8, 10 or 12 points) to both the song itself (how I rate it personally) and the artist performing it (their vocal skills, personality on stage etc). The average of those two scores will be each country’s final score. As always, I’ll post a mini ranking at the end of each review round + the full ranking alongside my pre-show predictions just before the contest. Share your own mini ranking in the comments to let me know which entries are hot and which are not in your opinion (but don’t be too mean because we are talking about kids here).

Last year…George Michaelides’ Dance Floor finished 16th (second last). I had a lot of blues to dance away in George’s parallel universe where the world is a dance floor after that.

The 2017 verdict Cyprus has transitioned from George’s cutting-edge but unsuccessful ethnopop to oh-so-2005 – but probably more of a point magnet – ethnopop with Nicole. Her catchy (to say the chorus of I Wanna Be A Star is an earworm would be an epic understatement), super-predictable (a blindfolded 2012-edition Donny Montell would have seen that key change coming) song comes via three-time ESC act Constantinos Christoforou – and given that he seemingly represented Cyprus with the adult version of the same song back in Kyiv in 2005, THAT MAKES SO MUCH SENSE. I guess I should stop going on about how dated IWBAS is, because that’s not a totally bad thing. After all, it means Cyprus is doing what Belarus did last year by bringing back a slice of vintage JESC for us all to feast on (although the Belarusian hoverboards would clearly have never featured in a Junior Eurovision circa 2004). I always appreciate a throwback in a contest that has grown up a lot recently, with a lot of the songs having the potential to double as ESC entries if a few lyrical changes were made. This throwback is a classic kid-spirational anthem with Cyprus stamped all over it, and the high energy + hooks = party time for three minutes. I definitely like it – while definitely not loving it – but I do wonder if Nicole has the charisma and live vocal ability to pull it off onstage. If it doesn’t look young and fun and if it doesn’t sound perfect, the result could be cringeworthy. In the end, I see I Wanna Be A Star outperforming Dance Floor, but only by a few rungs on the leaderboard ladder. I’m thinking 12th-14th, prior to making my official predictions… 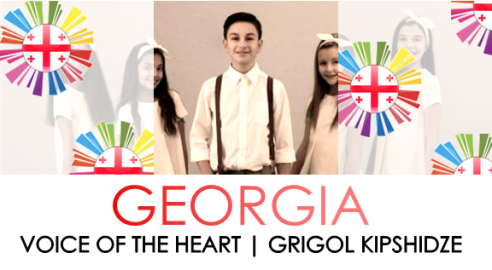 The 2017 verdict Host entries – at least when they’ve become host entries via their country winning the year before, which isn’t always the case with JESC – have a lot of pressure placed on them to follow in the footsteps of a peak result…or at least not embarrass themselves by failing miserably off the back of a peak result. Whether they’re hosting or not, Georgia is always a country to keep an eye on when Eurovision’s younger sibling drops by, and they’ve proven yet again that they know how this contest works with Grigol and his Voice of the Heart. It’s a more mature song and vocalist combo than usual, and for the third time in a row the lyrics are 100% Georgian (YAASSS for having full confidence in your native language!). It’s almost like a child-friendly version of Versace On The Floor by Bruno Mars – in fact, the structure and 90s R&B sound are so similar I wouldn’t be surprised to find out that it was directly inspired by that track. As such, since I’m a mahusive fan of both Bruno Mars and 90s R&B, VOTH is parked so far up my street it’s actually on someone’s front lawn. It’s not my favourite (or even second favourite) song in the 2017 comp, but I dig everything about it. Great melody, great build into some spectacular vocal runs that I hope to heck Grigol can replicate live, and an easy-listening feel that begs for atmospheric staging feat. spotlights and LED stars. In terms of measuring up to Mzeo, I don’t expect it to, but I am hoping for a decent 5th-8th finish. And when the audience inevitably claps their butts off for this host entry, I will be doing the same thing from my sofa (while simultaneously sobbing because I’m not in Tbilisi with them *sniff*).

Last year…Don’t pretend you’ve forgotten about Kisses and Dancin’, or that you’ve forgotten the dance moves. I know I haven’t. As irresistible as it was, it didn’t crack the top 5 in Malta – Kisses finished 8th.

The 2017 verdict Variety is the spice of life (apparently) so the Dutch bounce from girl group to boy band is worth a fist bump. We can expect Fource to be choreographed to within an inch of their pre-pubescent lives at JESC, and if their NF performances are anything to go by their vocals will be pretty tight (unless somebody’s voice breaks at the worst possible moment) – but that’s where the similarities between Kisses and Dancin’ and Love Me come to a screeching halt. Love Me, strangely enough, isn’t as instantly loveable as last year’s song, but after a few listens I’d say it’s just as high-quality. It’s more grown-up, and something you’d hear on mainstream radio if it was entirely in English. The chorus is so simple you don’t have a choice but to belt it out along with the boys (so the English that is used has been used very well) and the instrumental breaks are made for slick, crowd-pumping choreography á la the precision kind I mentioned before. Overall, the song’s energetic, modern and strikes a good balance between youthfulness and sophistication. It’s definitely in the middle on the maturity scale, but even so it reminds me of Macedonia’s too-mature-for-JESC entry last year, Love Will Lead Our Way (I guess when your song has ‘love’ in the title, maturity makes sense). I’m only talking in terms of style, but given Macedonia’s less than impressive result in 2016, that is a worry. Is Love Me dynamic enough to be in it to win it? Not quite, but I’m not discounting these guys. The Netherlands don’t always get the points they deserve at Junior, but when they’re on point anything is possible. Fource’s is a performance I’m extra psyched to see because if it’s cohesive, as the only group act in this year’s contest they’ll stand out for the right reasons.

Last year…Poland returned to JESC for the first time since 2004, reaching 11th place (a big leap from their losing streak of 2003/2004) with Olivia Wieczorek and Nie Zapomnij.

The 2017 verdict I wasn’t sure whether to create an air of mystery around this one or just lay all of my cards on the table right away. Eventually (after .5 of a second) I decided to go for the second option, and tell you that the suit of my cards is hearts all the way because OMG I LOVE THIS!! It is stunning. From the first time I heard that tinkly piano intro, I knew I’d found something special – the one song (because my other faves will have less trouble doing well) that I’d be supporting like a woman possessed. Like Georgia, Poland has opted to leave English out of their entry in favour of exotic, unpronounceable-to-the-untrained-speaker Polish, and it’s used in a melodically spine-tingling ballad that sounds more than a little Balkan at times (scoring major love points from me). I also must mention that masterpiece of a key change which, for a split second, makes crystal-clear vocalist Alicja sound like she’s out of tune until you realise she was just transitioning to a powerful second chorus in a way that would challenge singers twice her age. Speaking of Alicja – she may need to work on her charisma and stage presence a teensy bit, but she does emote enough to give Mój Dom the feels it needs to not look like an adult’s song being sung by a teenager. If someone can give her a shot of confidence and a Cinderella-style costume makeover before she steps on the Junior stage, Poland will have achieved perfection. Unfortunately, they aren’t a sure thing for success. I’m hoping this song will be another Tu Primo Grande Amore (or at least come close) but it could just as easily fall by the wayside, a.k.a. the low side of the scoreboard. My fingers will be crossed – once I’m done voting for it – in the hope that other people get the goosebumps I do when I hear it.

And Round 1 is DONE! You’ve got to love Junior Eurovision for making the review caseload way lighter than the adult contest does (reviewing 4/16 songs makes you feel much more accomplished than reviewing 4/42 songs).

With the first four JESC 2017 entries criticised (as nicely as possible) and scored by moi, here are the current standings:

So Grigol just misses out on getting a high five from me in favour of Alicja, whose song I’ve bumped ahead because it’s a little more magical. Will Poland manage to beat Georgia, The Netherlands and Cyprus in the actual contest? Probably not…but a girl can dream.

Before we find out for sure the weekend after next, I want to find out something else from you:

Once you’ve voted, come on down to the comments and let me know how you’d rank the rest of this random, out-of-the-EBJ-hat bunch who are prepping to shine bright in Tbilisi. You know you want to! It’ll help pass the time between now and Round 2 feat. Albania, Italy, Macedonia and Portugal J